The Best Views in Riga, Latvia 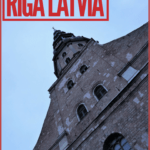 It doesn’t take long in Riga to realize the city’s beauty! The Riga Old Town area is full of wonderful examples of art nouveau architecture.  The city is well preserved and you will find parts of the old city wall that are still intact.  It’s not surprising that the Historic Centre of Riga has been named a UNESCO World Heritage site.  Of course, it’s nice to wander through some of the beautiful cobblestone streets, but I would also recommend that as part of your Riga sightseeing,  you also check out some of these spots for the best views in Riga. 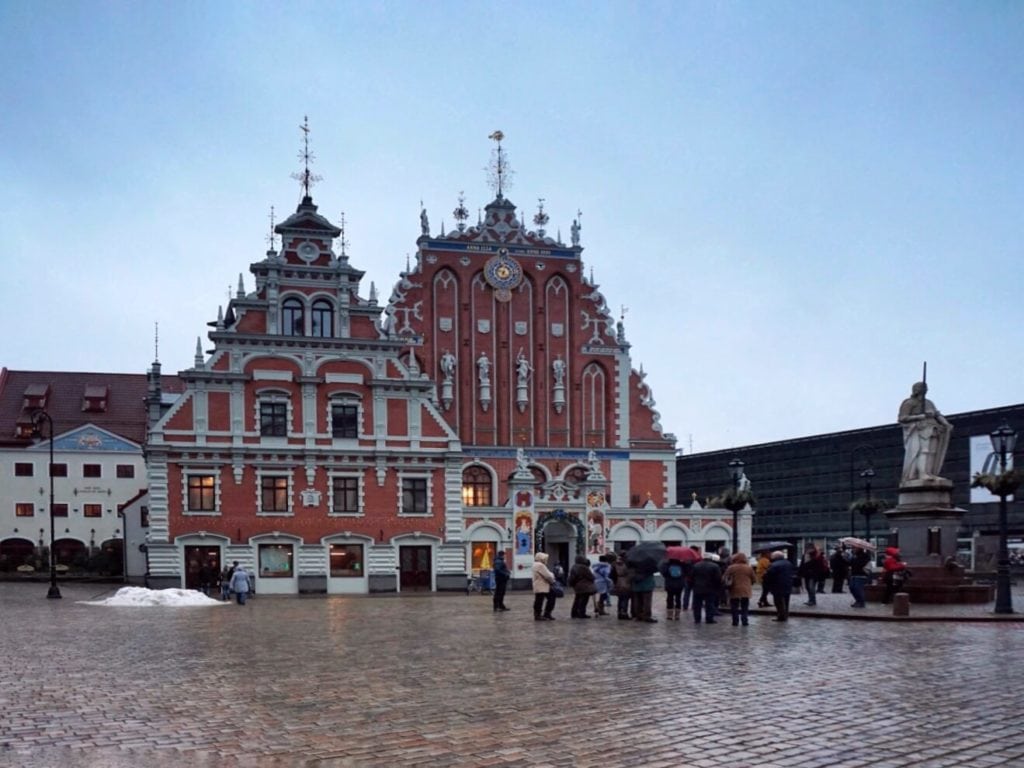 The House of the Blackheads is an example of some of the beautiful architecture in Riga.

Although Riga is a beautiful and thriving city now it has a very interesting and troubled history.  It was founded back in 1201 as a port city and a base to conquer and convert people to Christianity.  In 1621, Riga became part of Sweden but still maintained some autonomy. In 1710, an invasion by Peter the Great of Russia ended Swedish rule and Russian control began.

Latvia declared its independence on November 18, 1918, but it took two years of fighting the Latvian War of Independence, to be as recognized as an independent country by Soviet Russia. In 1940, the country was occupied again by the Soviet Union.  Then a year later, Latvia was invaded and occupied by Nazi Germany, and the Soviets regained control in the mid-1940s. You can learn more about what life was like under Russian rule at the Museum of the Occupation of Latvia.

Even under Soviet economic control, the Latvian culture and infrastructures survived.  The Latvian people still wanted their independence and finally got it in 1991. Then they began to rebuild the Riga old town area which had been damaged during World War II.  Now Latvia is a member of the United Nations, NATO, and the European Union and Riga, with its picturesque Old Town, has become a tourist destination.  To learn more about the city’s history and see areas outside the Old Town, check out this Riga alternative travel guide.

One of the best things to do in Riga is to admire the beauty of the city.  You can appreciate the architecture while you explore the town of Riga by foot, but you should also visit these four spots to get the best views in Riga.

On the other side of Esplanade Park from the Nativity Cathedral, you will find the Radisson Blu Latvija Conference & SPA Hotel.  (Please note there are several Radisson hotels in Riga.) Take the elevator up to the 26th floor of the hotel to get to the Skyline Bar.  In addition to an amazing view of the city, the bar has a trendy atmosphere, fantastic cocktails, delicious food, and music. 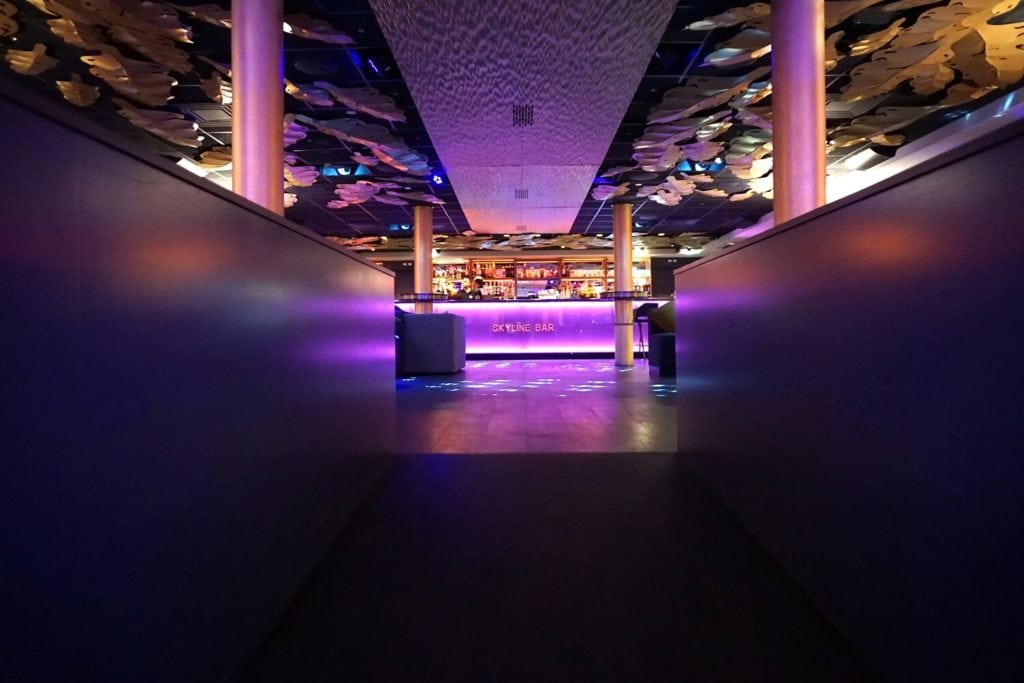 The Skyline Bar has a very trendy atmosphere.

While we were there, we had the chance to chat with Julian, who recently moved from London to Riga to manage the Skyline Bar.  He won best bar bartender at the London Club and Bar Awards. Now he is on a mission to make the Skyline Bar the best bar in the Baltics.  It is already the best bar in Riga – and I can’t wait to see what Julian does with it.

We actually went to the Skyline Riga twice.  I wanted to see the view at night and during the day too.  The evening we went to the Riga sky bar the weather was terrible! It was raining hard so we couldn’t see as much as we would have liked.  Despite the weather, the Latvian National Museum of Art looked very dramatic seen from above as it is lit up at night.

We had an early dinner and tried the Goulash, Steak Tartare, and Tiramisu, which were all delicious.  It was relatively quiet during our visit but later on Friday and Saturday nights, there is a DJ and I am sure the place gets packed.  If you want to experience Riga nightlife, go to the Skyline bar late on a weekend. It’s the place to party in Riga. 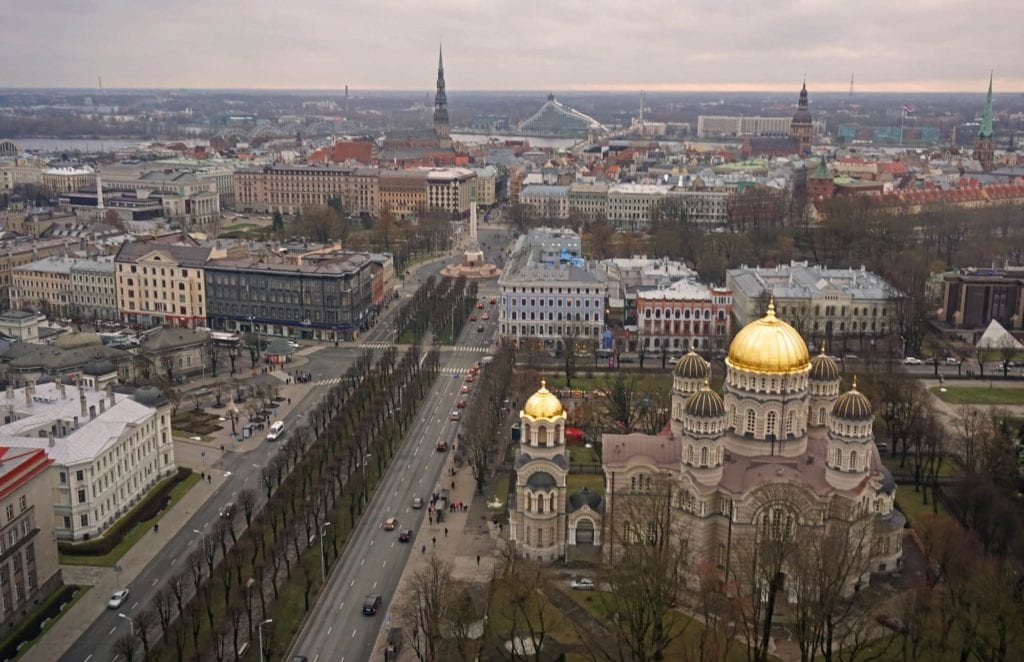 From our table at the Skyline Bar, we had an amazing view of the Nativity Cathedral.

We went back to the Skyline bar one afternoon just before sunset.  This time, it was a cold but clear day and the views were impressive.  The Nativity Cathedral is a beautiful building and they should consider illuminating it at night.  We had the Clavis Riga cocktails which reminded me of a cosmopolitan but they are made with the famous black balsam liquor from Riga.

Read more reviews of the Skyline Bar on Tripadvisor here.

If you are looking for a centrally located Riga hotel, the Radisson Blue Riga Latvija would be a great choice.  In addition to having the best of Riga’s nightlife, you are right by Esplanade Park, the Nativity Cathedral, and the Latvian Museum of Art.  The Old Town is within walking distance too.  After your sightseeing, you can relax at the ESPA spa.

Click here to check rates and availability or read reviews on Tripadvisor here.

St. Peter’s Church is located in the Riga Old Town not too far from the House of the Blackheads.  While the church was built in 1209, little remains from that time.  The first tower of St. Peter’s church was completed in the 15th century.  The tower you see today was built in 1967 and is the fifth tower to be built on the site.  Previous towers collapsed, were struck by lightning, or destroyed during a war. 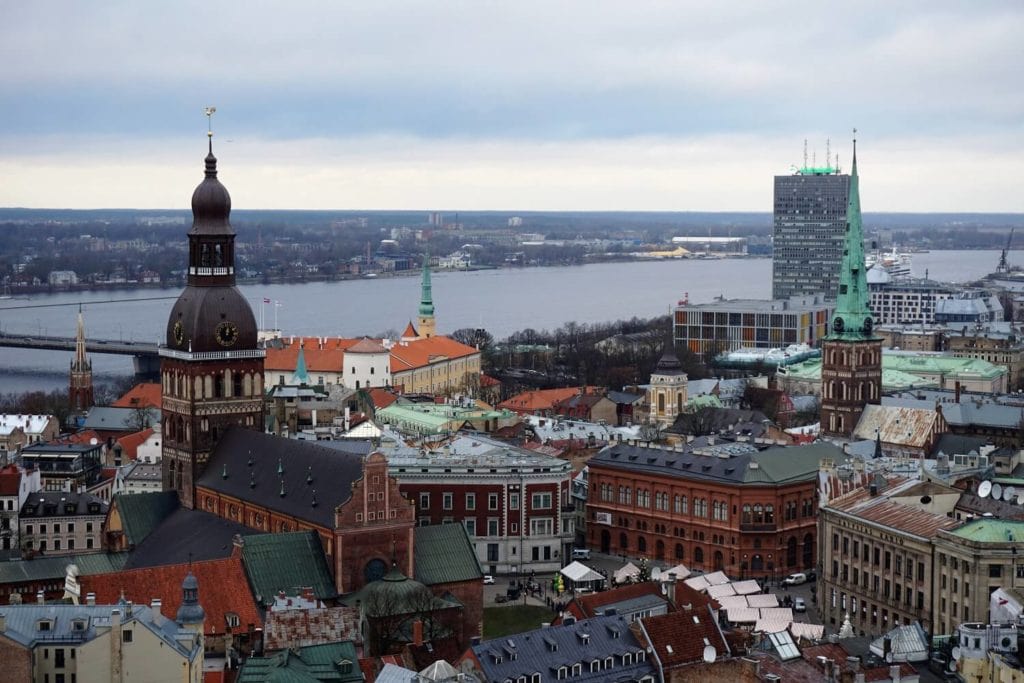 You get a great view of the Riga Cathedral from the observation deck of St. Peter’s Church.

It was a short ride up and then the elevator door opened right onto the outdoor observation deck.  You can walk around and get a 360-degree view of Riga and take as many selfies as you like!  I think it’s the best place to take photos of Riga since you don’t have to worry about any reflections from glass.  Just make sure you are dressed for the weather conditions! 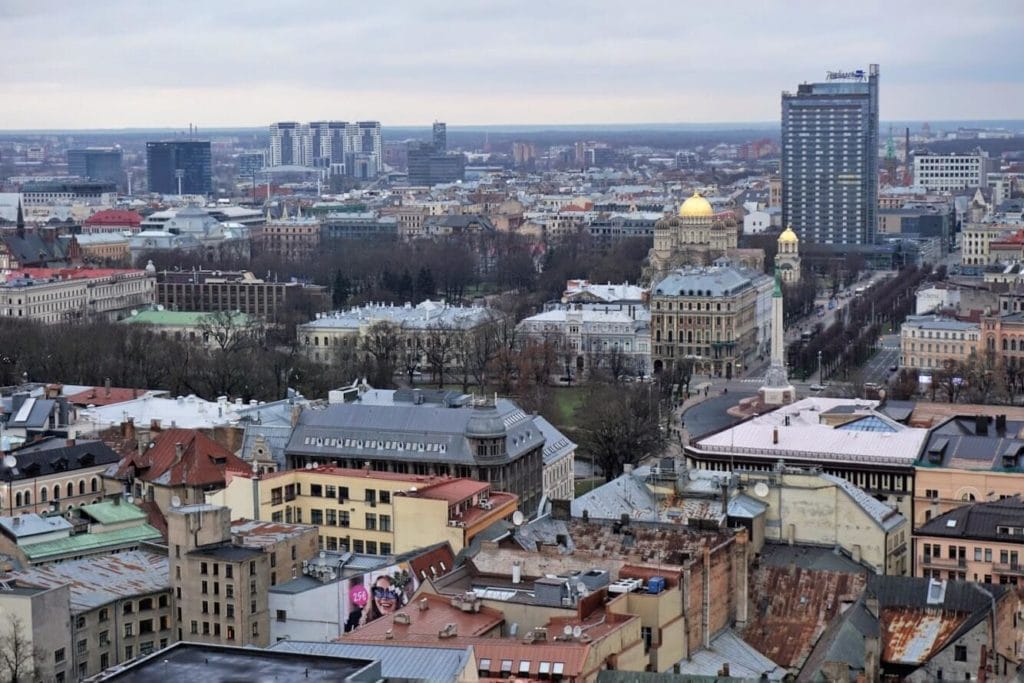 After we finished enjoying the views we headed back inside to see the rest of St. Peter’s church.  Although the tower dates from 1967, the basilica it sits upon was created during renovations of the church in the 15th century.  The church hall is used for exhibitions and concerts.  When we visited, there was a photography exhibition.  They change the art exhibits monthly.  You can also find some interesting artifacts and sculptures in the back of the hall.

There is a charge of €9 for adults to go up to the observation deck, which also includes admission to the church hall and the art exhibits.  If you only want to see the exhibition, the entrance fee is €3.  You can purchase your tickets when you arrive at St. Peter’s Church.

The Library is located across the river from the Old Town Riga.  The building is very modern and different from other buildings we saw in Riga.  To me, it looked like either an iceberg or an ice castle.  One of my Instagram followers, Chantal, suggested that I visit the library for a lovely view of Riga. 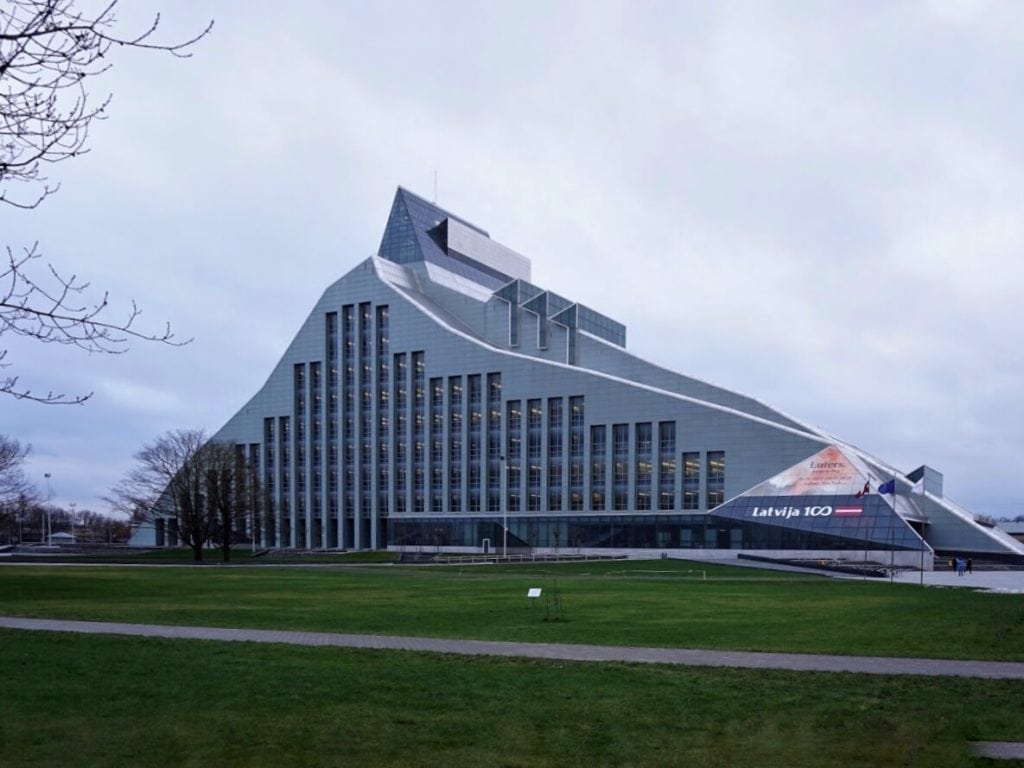 The modern architecture of the Riga Library stood out compared to what we saw in Riga Old Town.

Unfortunately, when we entered the Library, we learned that you can only go to the top floor (11th) on Sundays.  Since it was Saturday, we would have to settle for the view from the 8th floor.  Before we could go up, we had to check our coats and put all our bags (including my purse) in a locker.  The locker required a 1 euro coin to lock it.

After we had put away our belongings, we returned to the information desk and collected our visitor passes.  We took the elevator up and entered a room where a few others were working on computers.  We looked out the large windows and the view was pretty impressive. From this side of the river, you have a good view of the towers of St Peter’s Church, Riga Cathedral, and the Nativity Cathedral.

Read reviews of the National Library on Tripadvisor here.

There was another tall building that Russell noticed when we were walking to the Riga Central Market. I looked into it and I found out that it was the Science Academy Building also known by Riga’s residents as “Stalin’s Birthday Cake.” From the beginning of April through October, you can take the elevator to the outdoor observation deck on the 17th floor for €4.  Unfortunately, the building was not open while we were in Riga, so we will have to do that on our next trip.  I would like to see the Riga Central Market from above and get another perspective of the city. 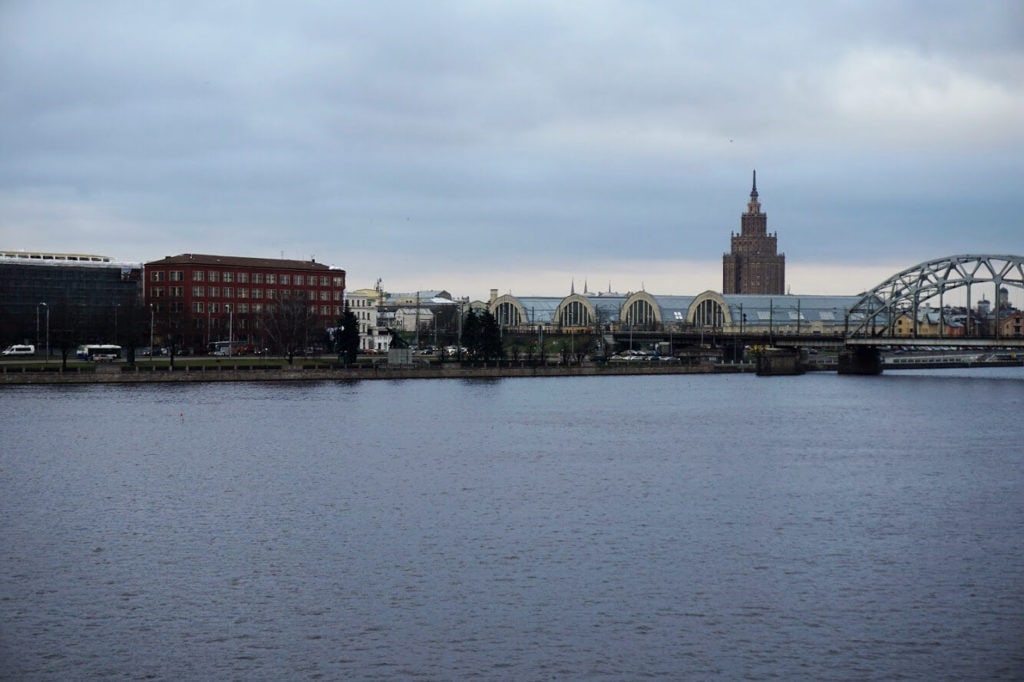 Read more about the Science Acadamy Building on Wikipedia here.

Riga is a beautiful city and you will want to see it from all angles.  Luckily, there are several options and they are all within walking distance of each other.  Check out our video to get a better idea of some of these Riga sights.

Have you been to Riga? What were some of your favorite Riga tourist attractions and viewpoints?

Disclosure: We were guests of the Skyline Bar and St. Peter’s Church.  As always, opinions expressed here are my own. 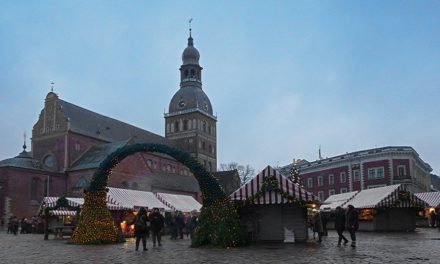 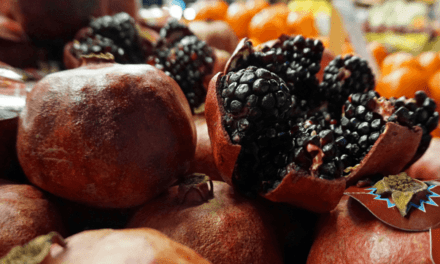