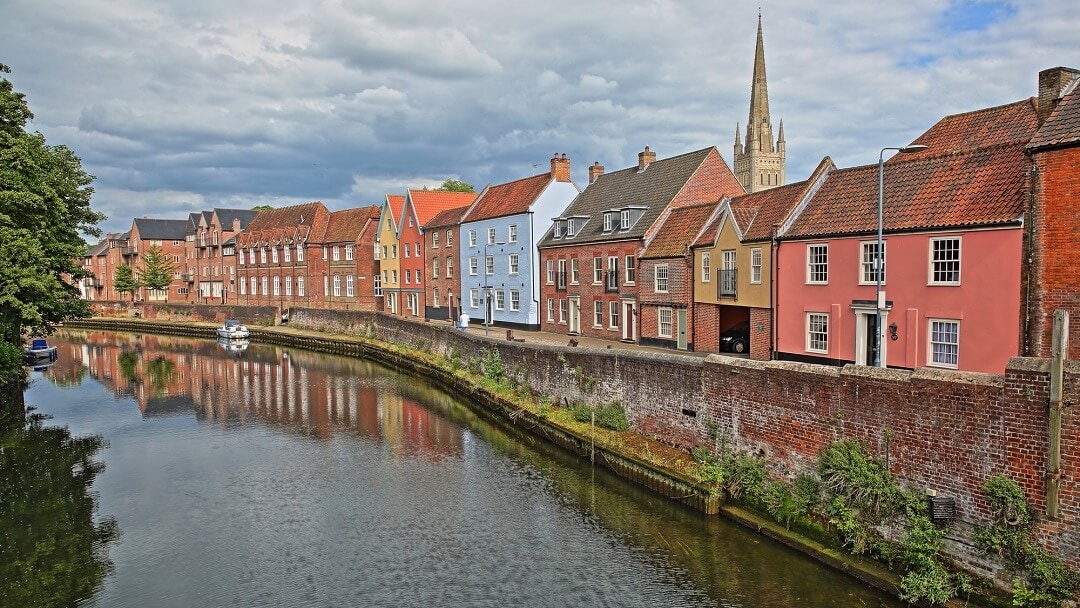 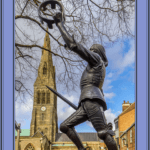 Cambridge is one of my favorite cities in England.  It is picture-perfect, filled with history, and home to one of the most famous universities in the world.  Many tourists do a day trip to Cambridge from London because it is only an hour train ride away, but the city has so much to offer that it is worth staying longer.

Consider making Cambridge the base for your trip, as this will allow more time to explore the greater area. There are a number of easy day trips from Cambridge that give you the opportunity to see other amazing places in England too.

Let me tell you more about the different options, so you can choose the one that is most aligned with your interests.

Cambridge could be an ideal base to explore more of England.

Places to Visit Near Cambridge

Cambridge is located in Cambridgeshire in the East Anglia region of England. Most people think of the region as mostly flat, but there are some hilly areas. Outside of a few reasonably-sized towns and cities, the area is mostly rural with a strong farming industry.

The smaller cities and towns in England are often worth taking the time to explore. They still give you that sense of history and medieval architecture you get in London, but without the crowds, and you get a different perspective from what you might be familiar with from seeing London on TV!

Many of the destinations in this post can be reached by public transportation from Cambridge, but having a car does open up a few more options.  An additional perk is that most of the ideas I have listed also have attractions that are free to visit.

Norwich is the capital city of the county of Norfolk and now my adopted home. (You can read more about how I moved to England here.) In medieval times, it was England’s second most powerful city.  The street plan and some of the city walls are still intact, making it a picturesque place to explore. 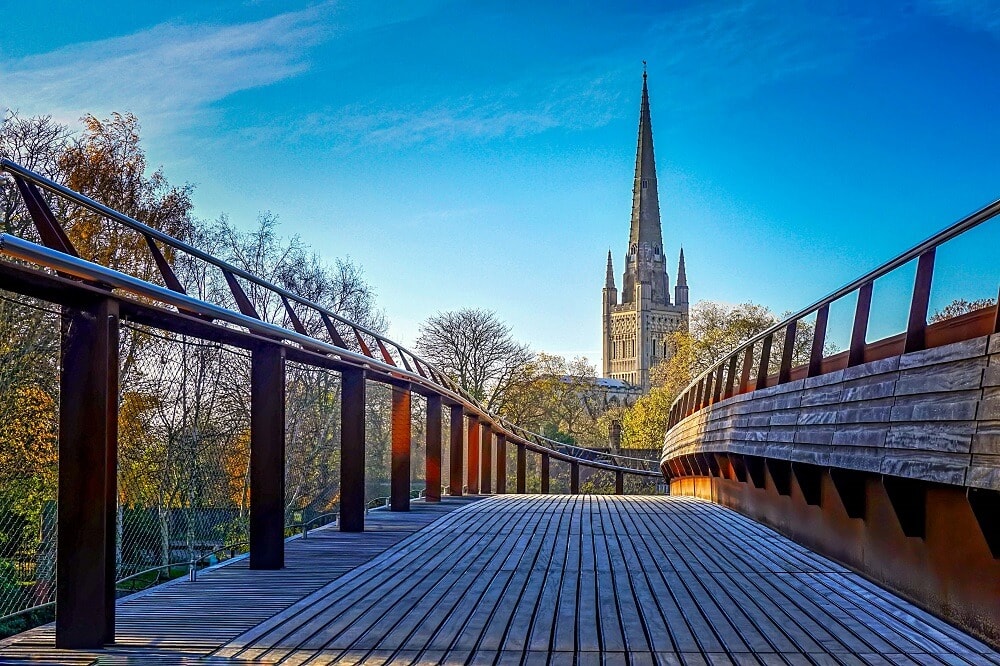 View of the Norwich Cathedral from the Jarrold Bridge

What to Do in Norwich 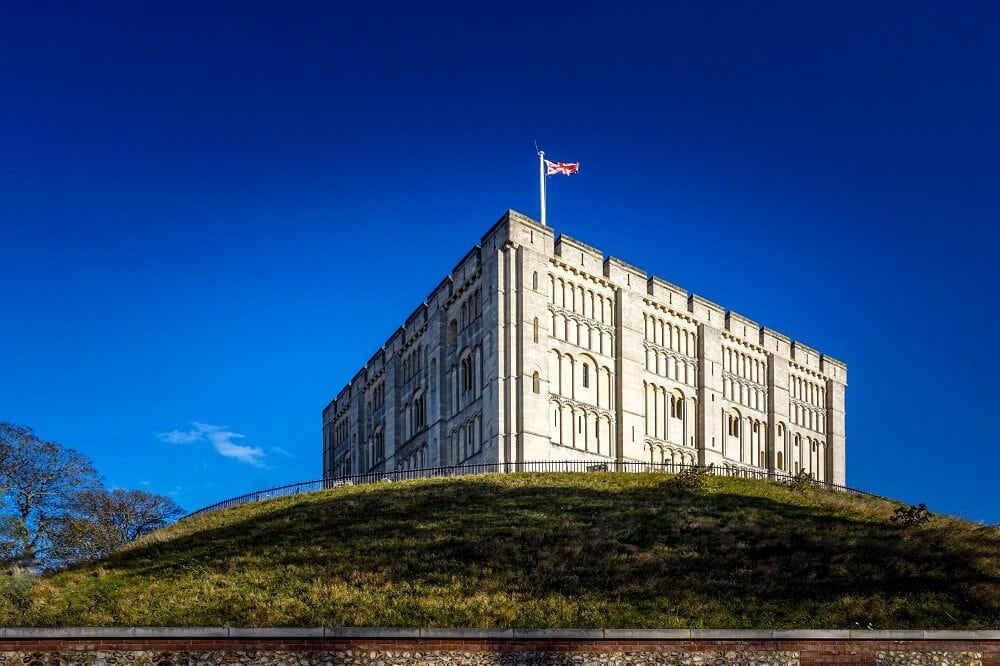 How to Travel from Cambridge to Norwich

It’s just a little more than an hour away from Cambridge by train.  Click here to check the schedule and prices.

Ely is one of the smallest cities in England, but definitely worth a visit for its Cathedral alone.  The name Ely comes from the Isle of Eels when the city was surrounded by water and marshland. Eels are still caught in the River Great Ouse and many still consider smoked eel a delicacy. 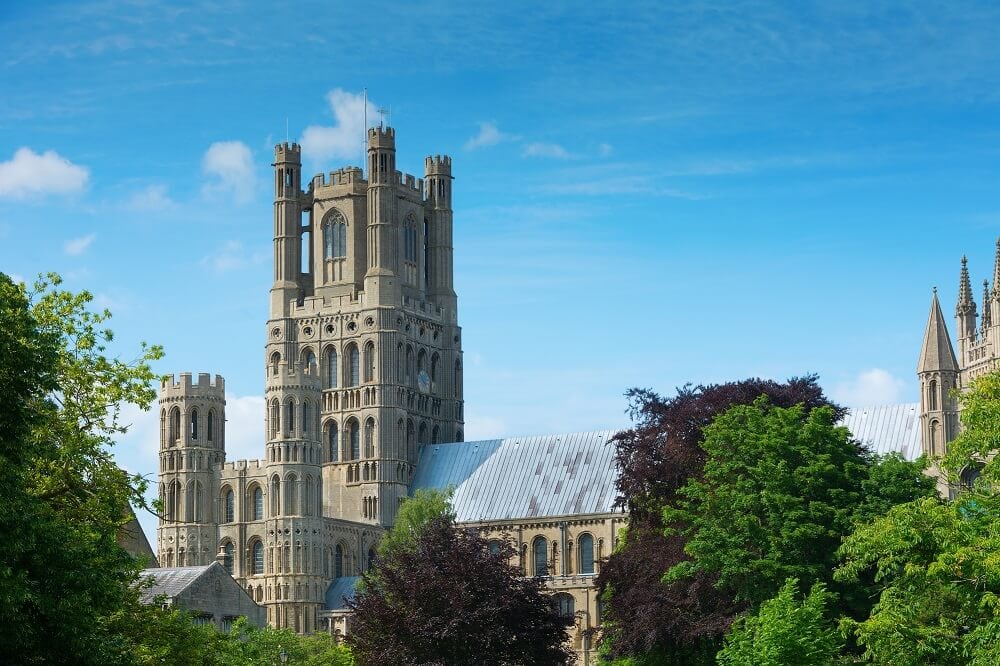 What to Do in Ely 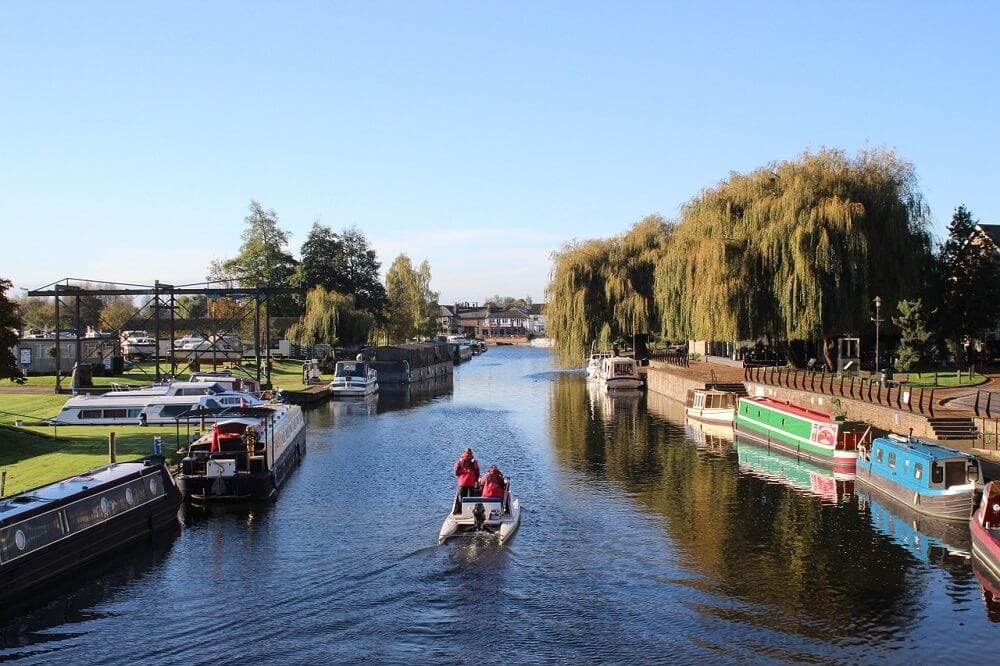 The Riverside area in Ely is perfect for a relaxing walk (or boat ride!).

How to Travel from Cambridge to Ely

It’s less than 20 minutes from Cambridge to Ely on the train. Click here to check the schedule and prices.

Bury St. Edmunds is a small city located about 30 miles east of Cambridge. It used to be a pilgrimage site where people would come to see the shrine to King Edmund who died in 869. Now, it is known for brewing (Greene King brewery) and a sugar processing factory. 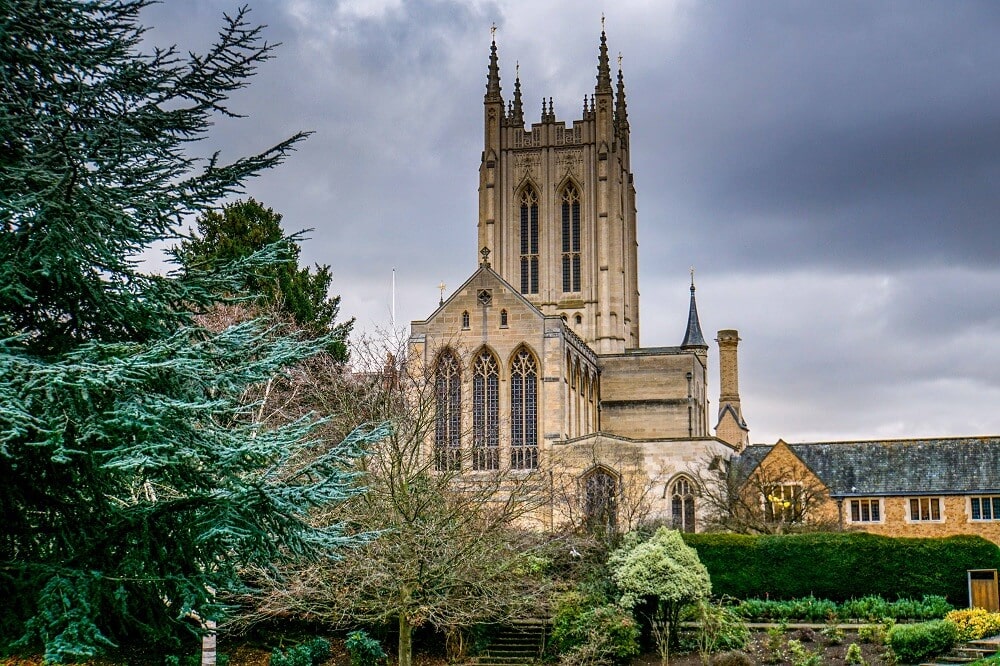 You can’t even tell that the tower of the Cathedral was added recently!

What to Do in Bury St. Edmunds

Note: If you are lucky enough to visit during the Bury St. Edmunds Christmas Market, be prepared for crowds! 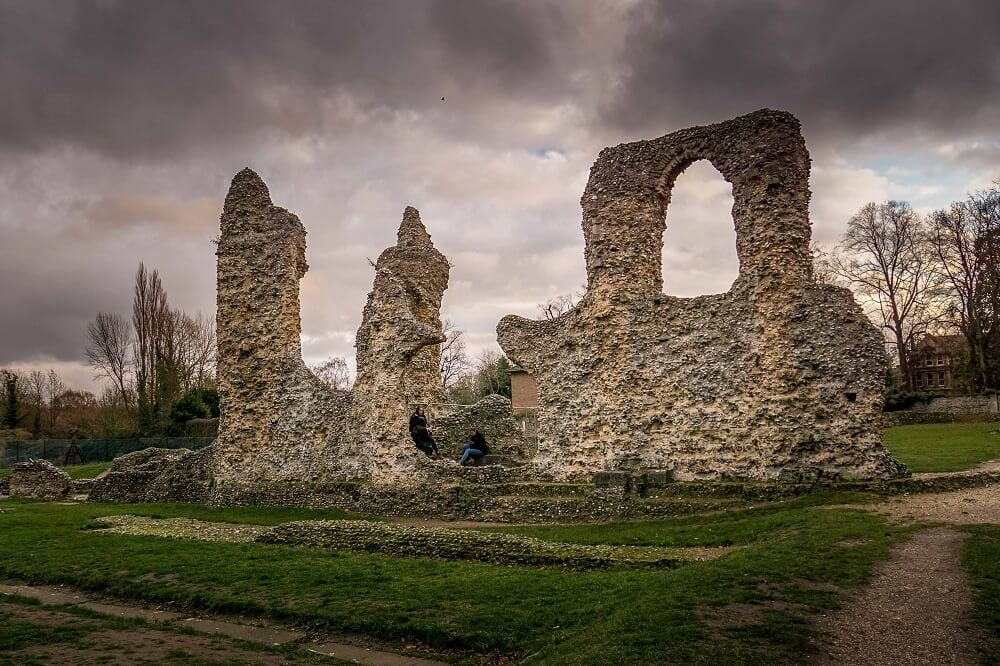 The Bury St. Edmund’s Abbey is just ruins but definitely worth exploring.

How to Travel from Cambridge to Bury St. Edmunds

There are some direct trains to Bury from Cambridge that take about 40 minutes.  In some cases, it may take about an hour because you need to change trains in Ely.  Click here to check schedules and pricing.

Thetford is a small town about halfway between Cambridge and Norwich that is full of history.  It is probably best known as the hometown of Thomas Paine, one of the founding fathers of the United States and the author of Common Sense.  There is a nice statue of Thomas Paine on King Street with some of his most famous quotes.

Even before Thomas Paine’s time, Thetford was an important town. 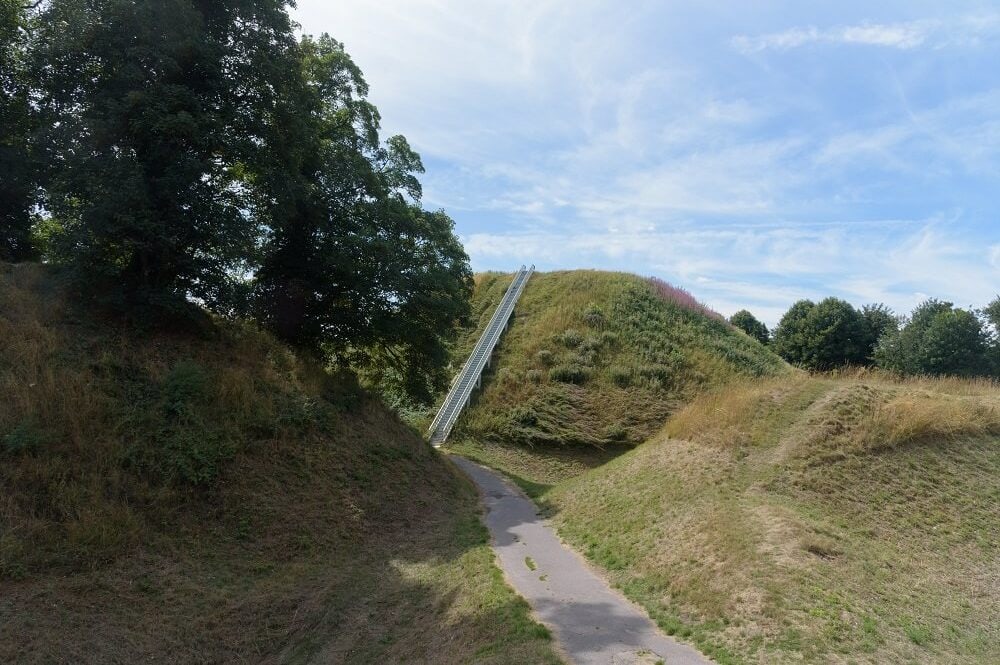 The climb up Thetford Castle is worth it for the views.

What to Do In Thetford 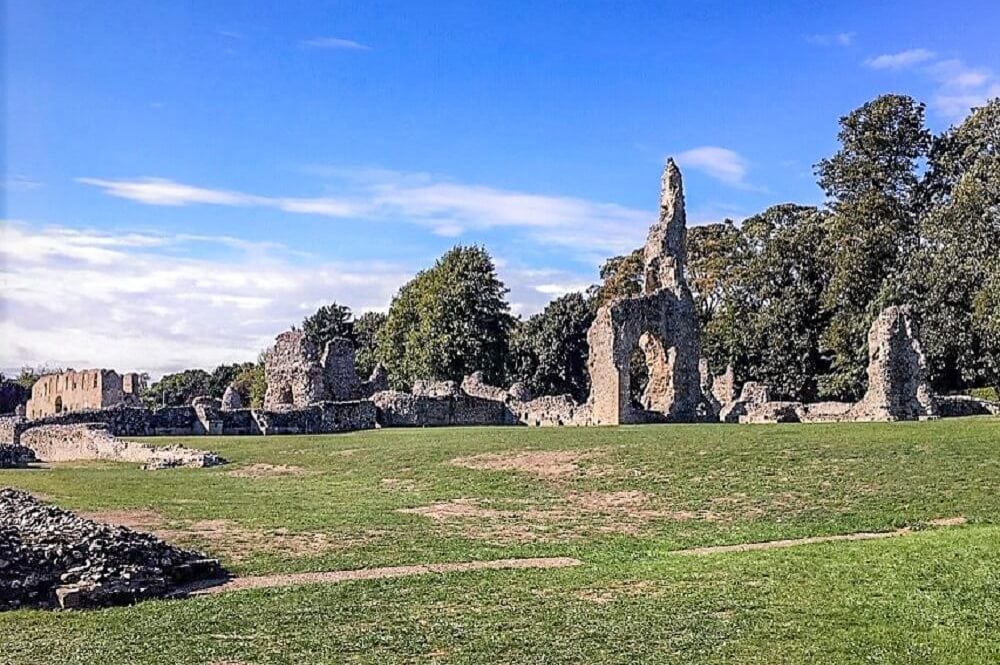 You can imagine what the Priory looked like in its prime.

How to Travel from Cambridge to Thetford

It takes about 45 minutes on the train to get to Thetford from Cambridge. Click here to check schedules and pricing.

King’s Lynn was one of England’s most important ports from as early as the 12th century.  The town’s heritage is reflected in the historic buildings and market places. 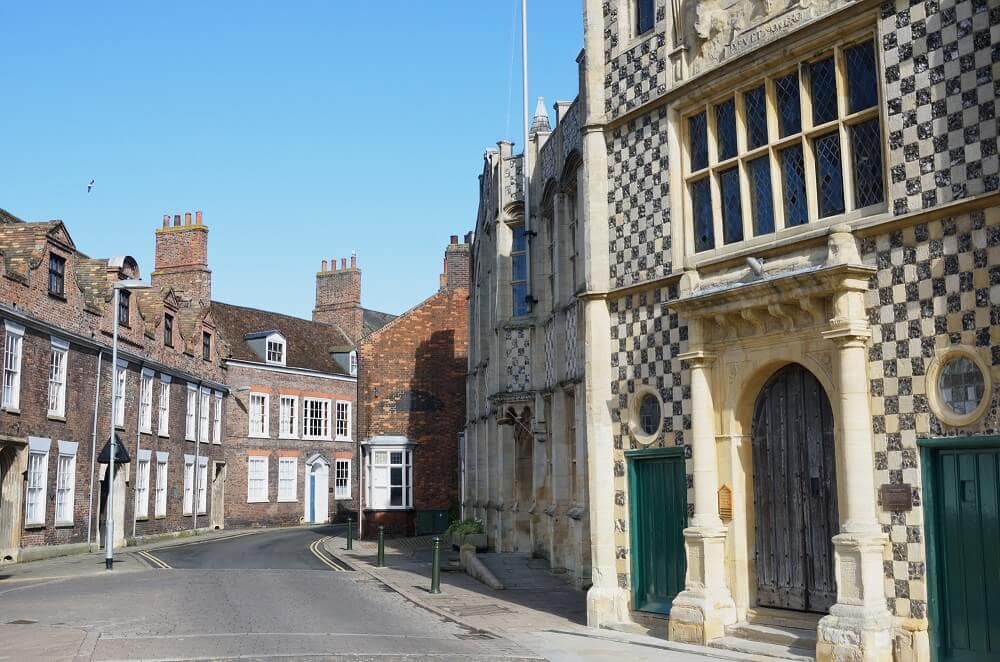 The architecture in King’s Lynn is traditional.

What to Do in King’s Lynn

Read about more things to do in King’s Lynn. 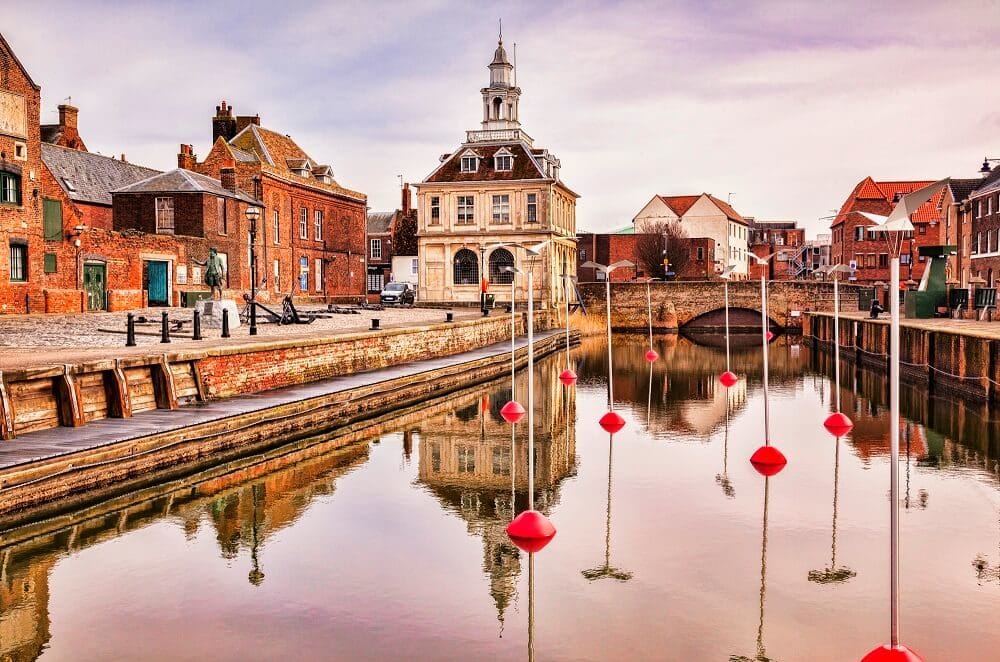 You can still tell that Kings Lynn was an important port.

How to Travel from Cambridge to King’s Lynn

It takes about an hour on the train to get to King’s Lynn from Cambridge. Click here to check schedules and pricing.

Leicester (pronounced Lester) is one of the oldest cities in England.  It is known for its connection to Richard III and it’s miraculous English Premier League win in 2016.  Leicester is located in the East Midlands of England and lies on the River Soar, close to the eastern end of the National Forest.

The city is also known for Red Leceister, one of the best British cheeses. 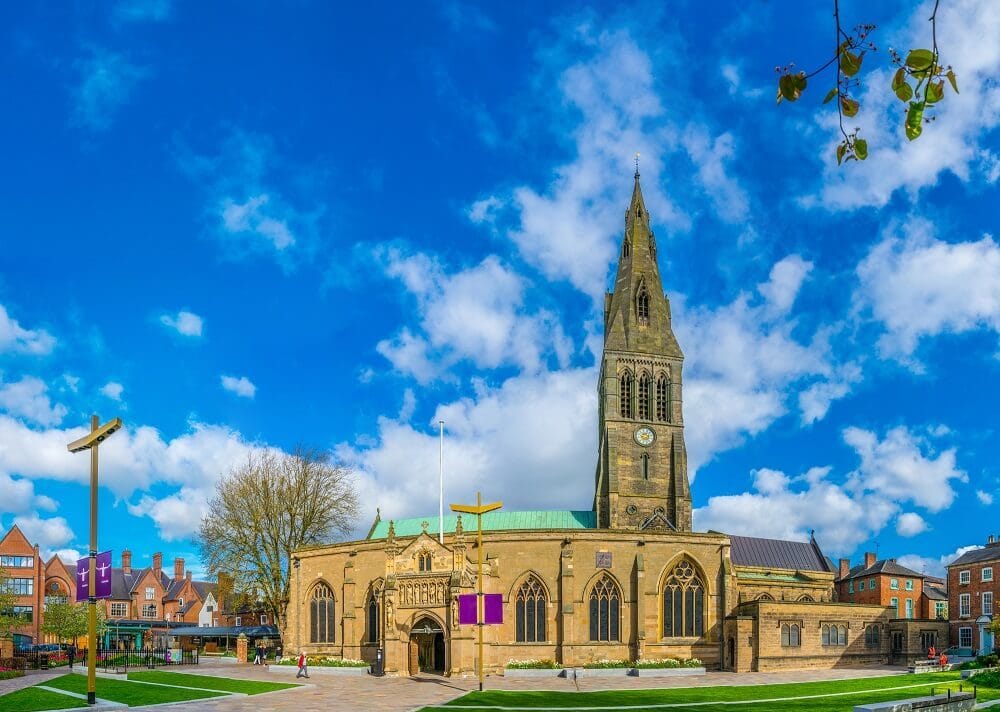 What to Do in Leicester 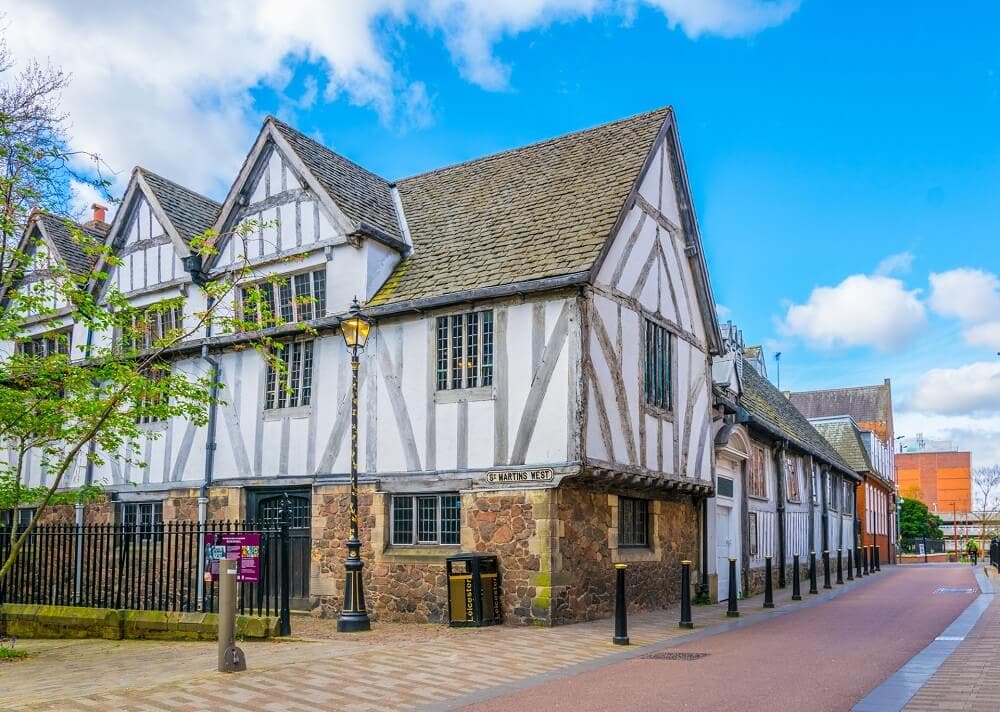 Next to the Cathedral is the medieval Guildhall.

How to Travel from Cambridge to Leicester

It’s a little less than two hours on the cross country train to get to Leicester from Cambridge.  Click here to check schedule and pricing.

Oxford is Cambridge’s rival University city located 85 miles to the southwest.  It’s easy to see why Oxford is known as the City of Dreaming Spires. Similar to Cambridge, the biggest attraction in Oxford is the University, and they even have a Bridge of Sighs too.

The Bodleian Library is the 2nd largest library in the country.

What to Do in Oxford 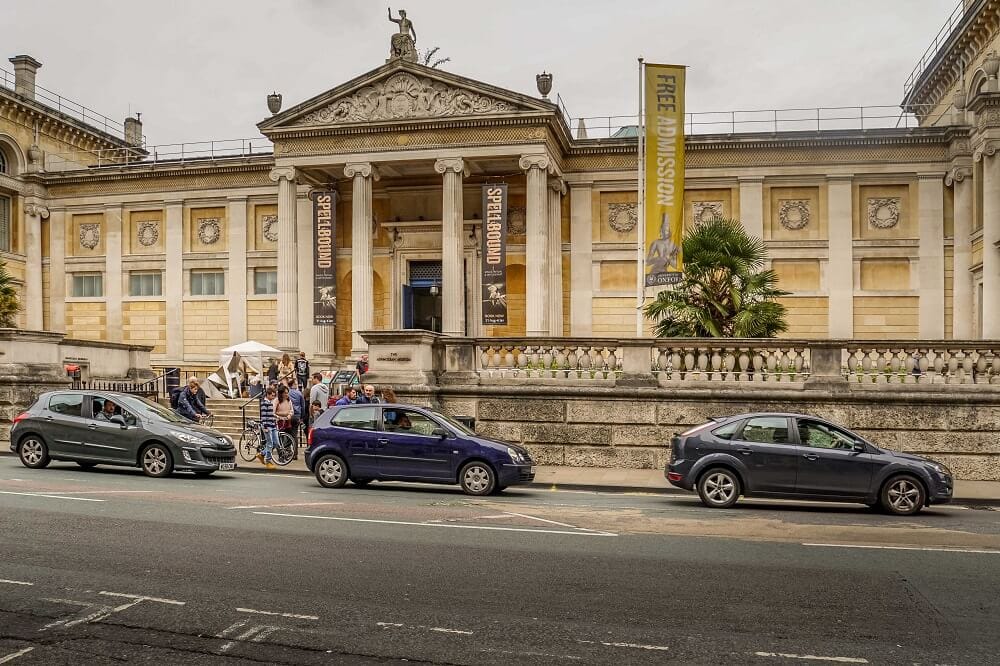 Inside the Ashmolean is an impressive and diverse collection.

How to Travel from Cambridge to Oxford

London needs no introduction.  The problem with doing a day trip to London will be deciding what to do because London has so much to offer. 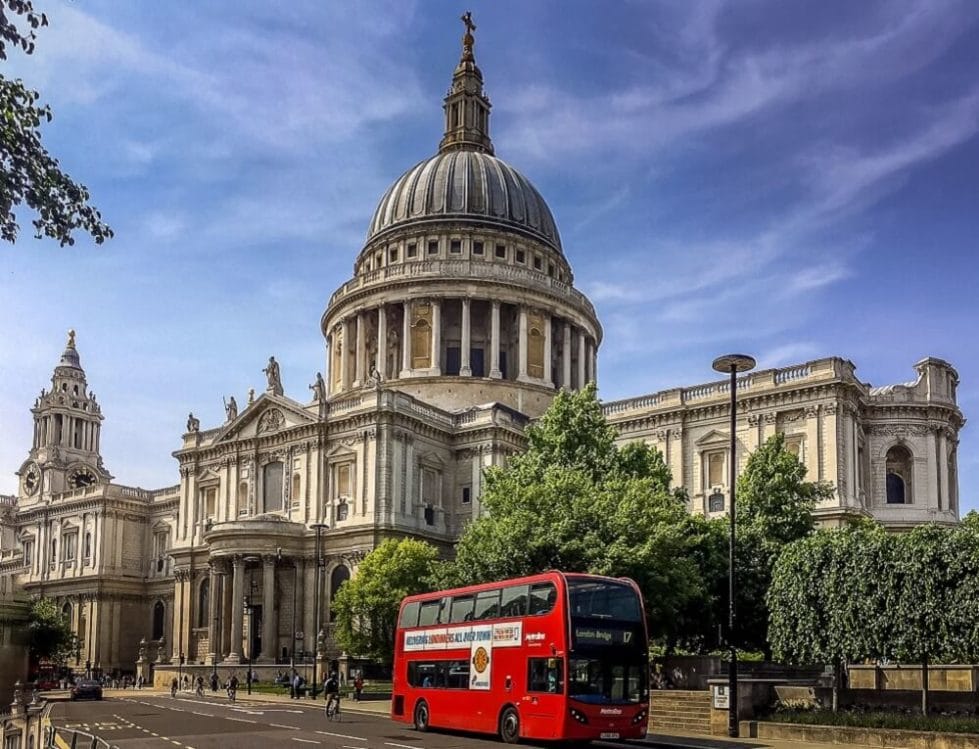 St. Paul’s is one of London’s iconic landmarks.

What to Do on a Day Trip to London 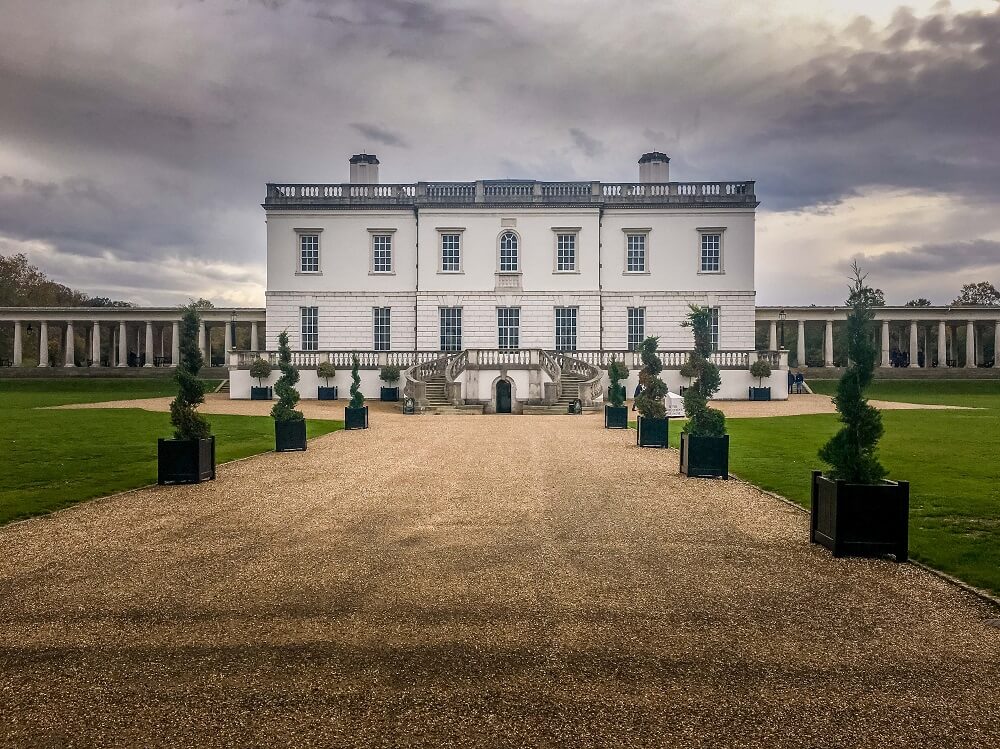 The Queen’s House is worth the journey to Greenwich.

How to Travel from Cambridge to London

The best way to travel to London from Cambridge is by train as it takes about an hour.  There are options to go into London Liverpool Street Station or London King’s Cross Station. Click here to check schedules and pricing.

Day Trips from Cambridge if You Have a Car

While there are plenty of options for places to visit near Cambridge by public transportation, having a car does open up a few exciting options.  Keep in mind driving in the UK is quite different from the US.

Stonehenge is the most famous ancient monument in England.  In addition to the Stone Circle, there are several other neolithic sites to visit in the area.  Read more about visiting Stonehenge here. 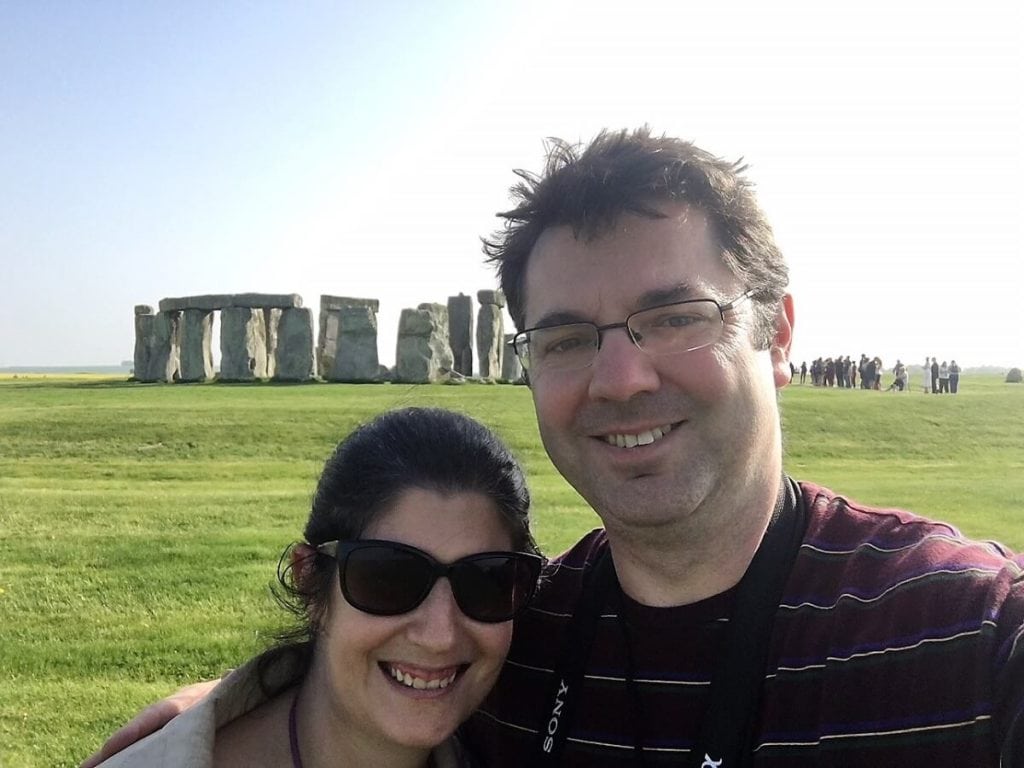 Stonehenge is an English Heritage site so members can get in free.  If you like visiting historic sites in England, it’s worth considering becoming a member, we have definitely gotten our money’s worth! Click here to get more information on English Heritage membership.  If you are visiting England from overseas, consider getting the English Heritage overseas pass.

As you can imagine, Stonehenge is not easily accessible by public transportation as it is in the middle of the beautiful Wiltshire countryside.  It takes a little more than two hours to drive from Cambridge to Stonehenge. 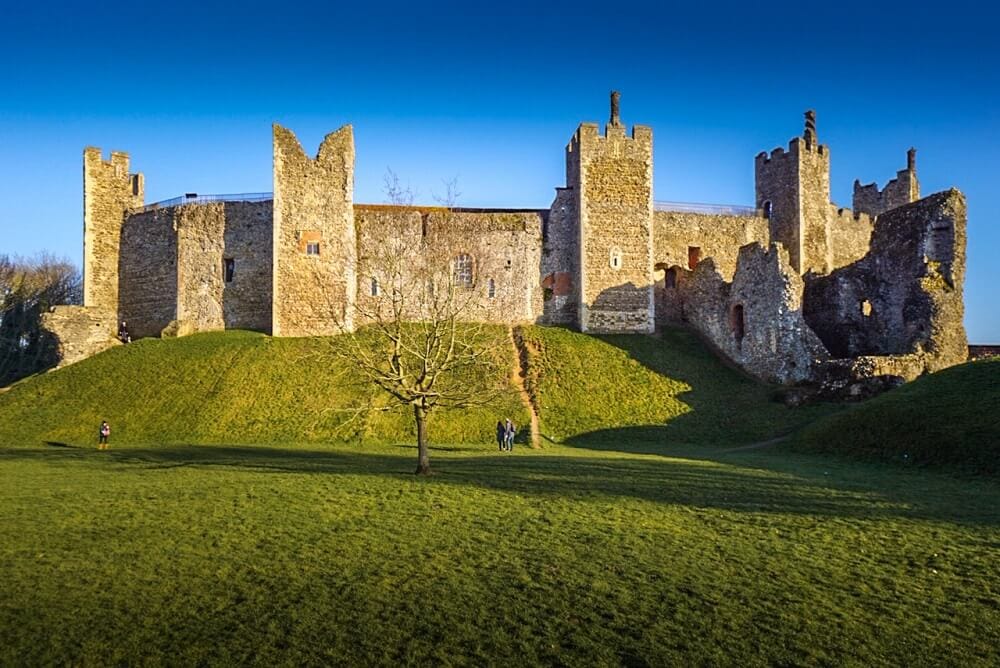 Framlingham Castle, where Bloody Mary was crowned Queen of England

It takes about an hour and a half to drive from Cambridge to Framlingham.  Other attractions nearby include Saxton Green Post Mill (also an English Heritage site) and Helmingham Hall Gardens.

Colchester was the first Roman capital of Britain and the oldest recorded town, so it’s another good place for history lovers.  The most popular attraction in Colchester is its Norman castle which has been turned into a museum, but there are also quite a few Roman ruins to see. 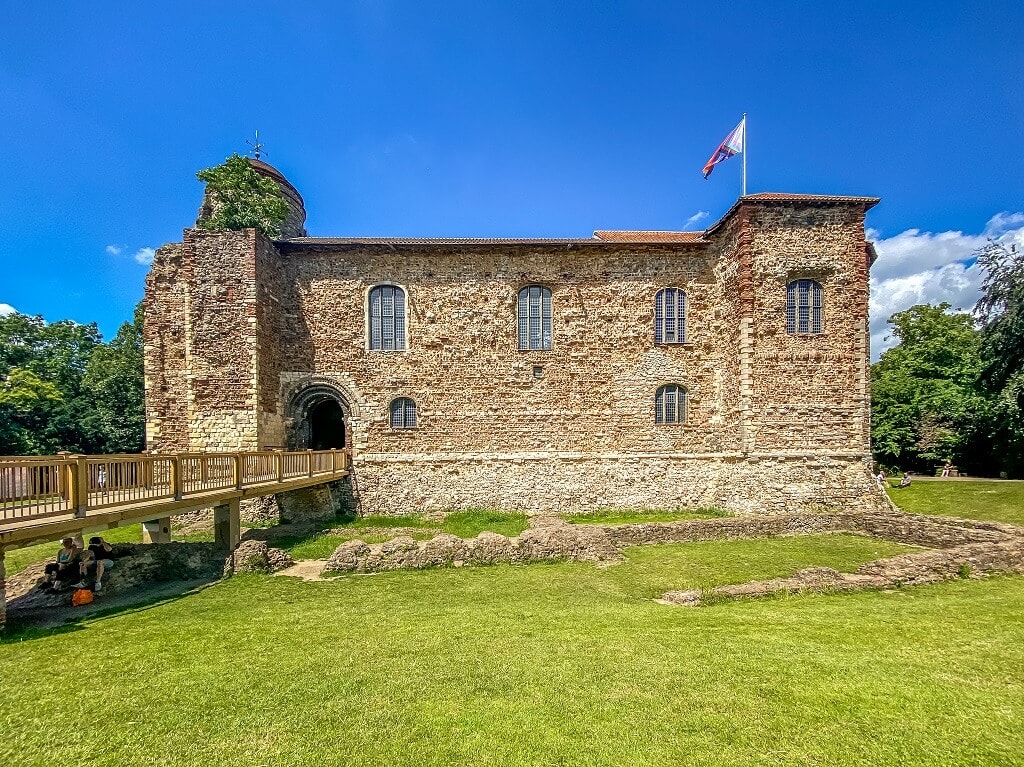 When you visit Colchester, you must go to the castle.

There is no direct train between Cambridge and Colchester, but if you have a car it’s only an hour and a half drive making it a doable as a day trip.  Check out our post for more ideas of things to do in Colchester.

The Harry Potter Studio tour is a must for any serious Potterhead.  You get to go behind-the-scenes of the Harry Potter films including visiting the sets for the Great Hall, Dumbledore’s Office, and Diagon Alley.

There is so much to see as part of the Harry Potter Studio Tour.

During the winter season, the Studio is transformed into what is called “Hogwarts in the Snow.”  All the famous movie sets are decorated for the season – fires roar in the fireplaces, the Gryffindor common room is filled with Christmas treats, and the Hogwarts castle model is covered in a blanket of snow.

Like other Harry Potter attractions, the Studio Tour is popular, so it’s best to buy your tickets in advance here.

There is no train you can take to the Harry Potter Studio Tour so it is best to drive.  There is free onsite parking included with your admission.

Cambridge is a worthwhile destination in its own right, but it could also be a convenient base to see more of England.  As you can see there are a few interesting options if you want to do a day trip from Cambridge.

Have you visited any of these cities or towns near Cambridge? 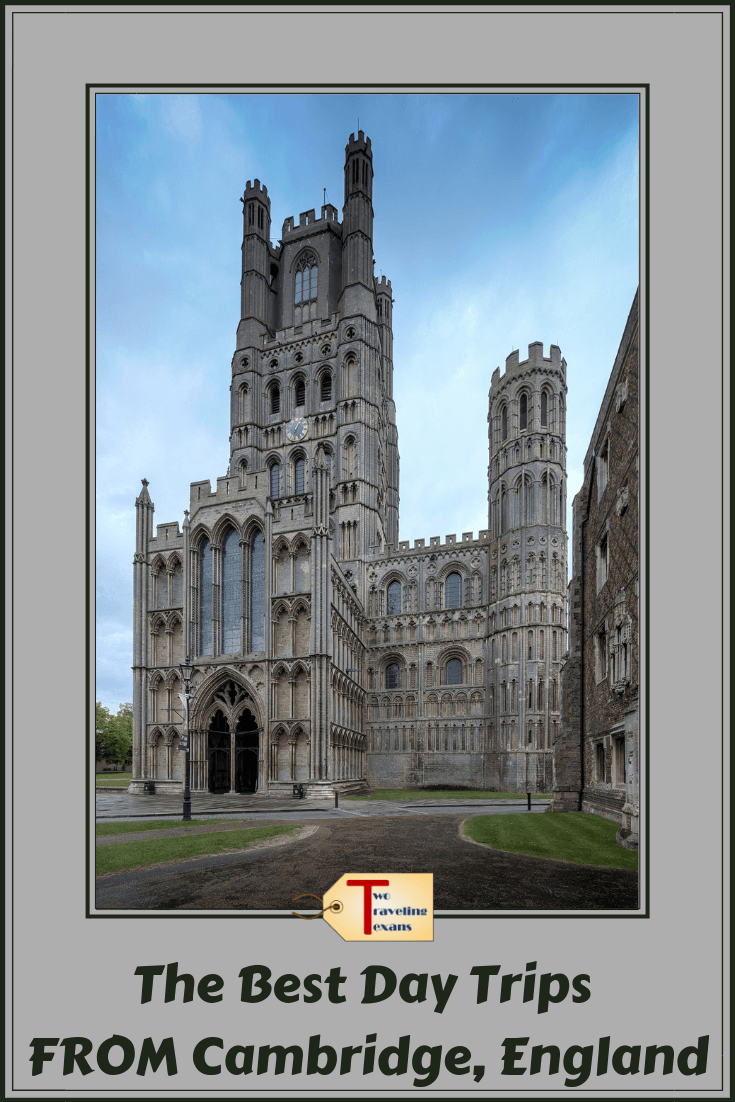 Disclosure: This post contains affiliate links. As an Amazon Associate, we earn from qualifying purchses. This means we will receive a small commission for some purchases made using links in our blog with no additional cost to you.  Please be assured we would not promote any product unless we believe that our readers will also benefit.  The commission does not influence the editorial content of this site. 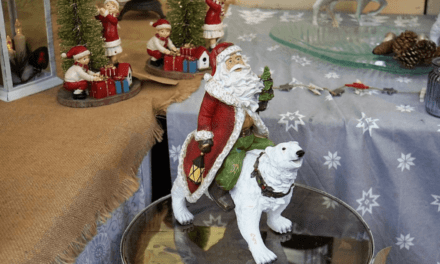 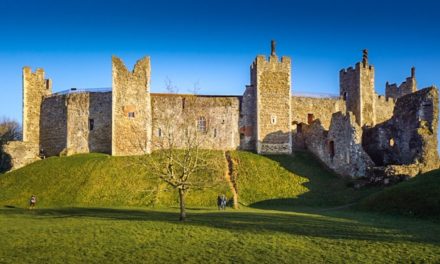