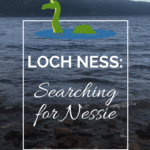 Of course the first thing you think of when you hear Loch Ness is the legendary monster, Nessie.  I heard about many sightings but even as a kid I doubted the monster existed.  Still, when I realized we would be going close to Loch Ness on our way to Isle of Skye, I thought it would be fun to explore and see if I could have my own Nessie sighting.  We planned on visiting the Loch Ness Exhibition Centre to learn about the history and then go looking for Nessie on a Loch Ness boat tour during our week in Scotland. 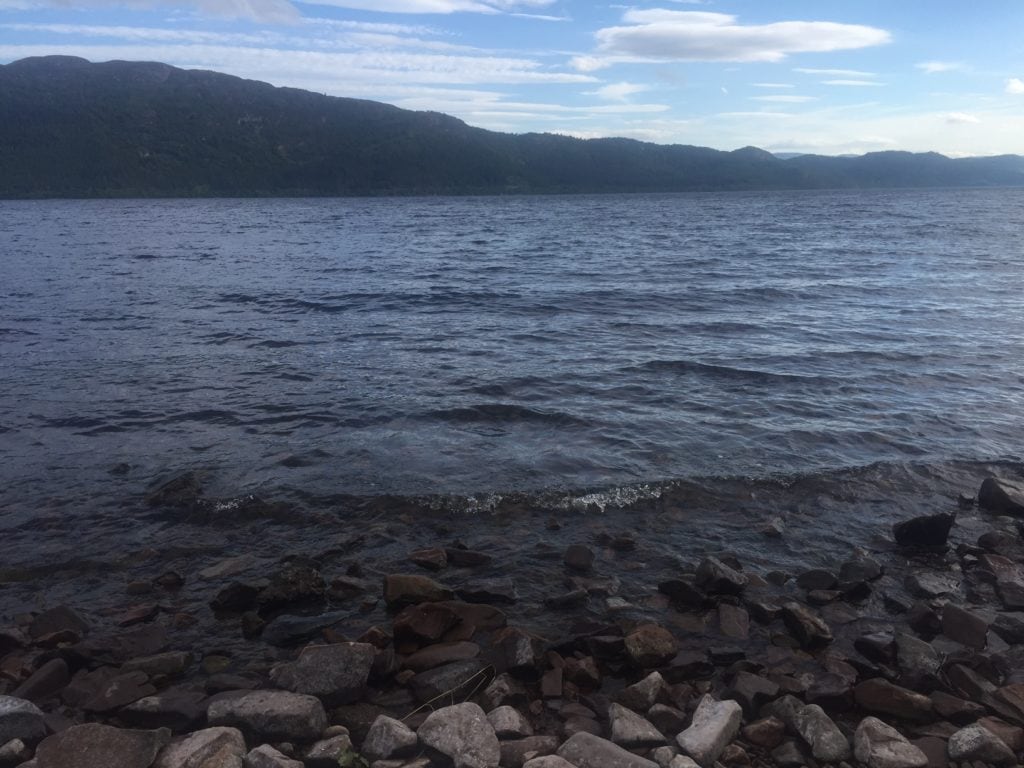 The shores of Loch Ness

Loch Ness is known for more than just Nessie.  It is the biggest lake by volume in the UK because it is very deep in places.  To give you an idea of the scope, it holds more water than all of the lakes in England and Wales combined.  The Loch Ness water is very calm and we only saw a few boats.  However, the water visibility is extremely low because of the high peat content in the soil.    The area around Loch Ness is very beautiful and very green.  You can see the ruins of Urquhart Castle on the shore.  There are very few other buildings are right on the lake, so it feels very rural.   The town of Inverness is located 8 miles away. (Read more about other day trips from Inverness.) 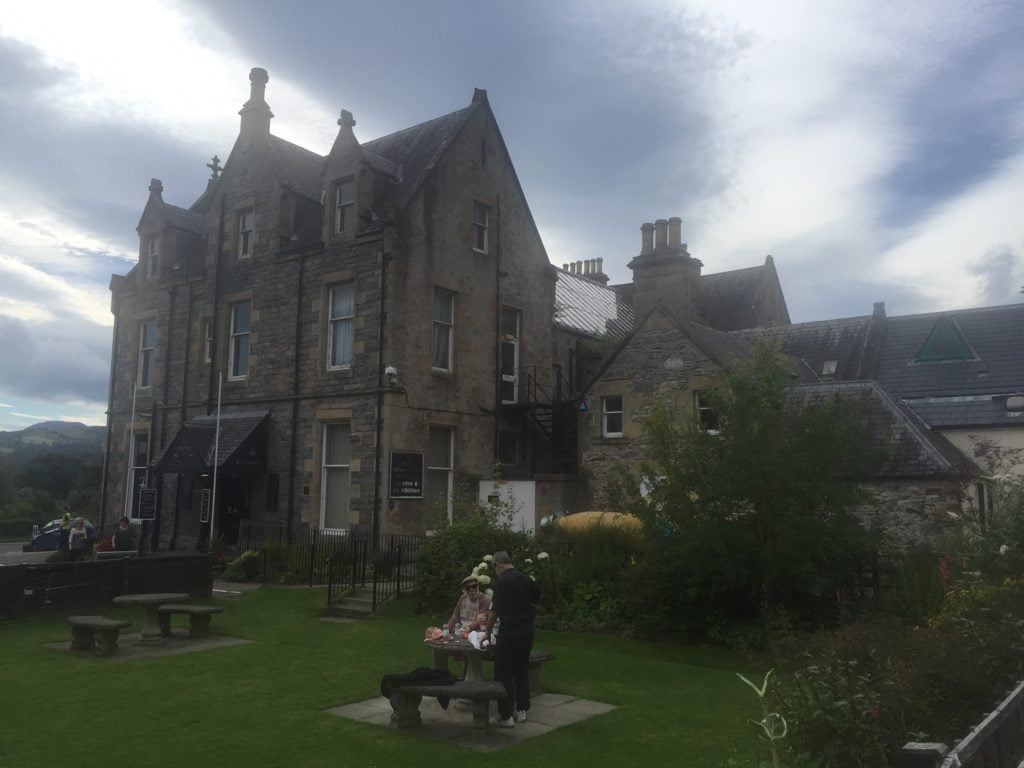 Loch Ness Exhibition Centre is in a pretty building!

We started our Loch Ness tour at the Loch Ness Exhibition Centre so that we could learn a little bit more about the history.  Outside the building, there is the submarine that was used in the Loch Ness investigation in 1969.  Most of the exhibition is videos telling the history of Nessie and all the scientific research that has been done.  You move through the rooms watching short videos with some pretty fun special effects. 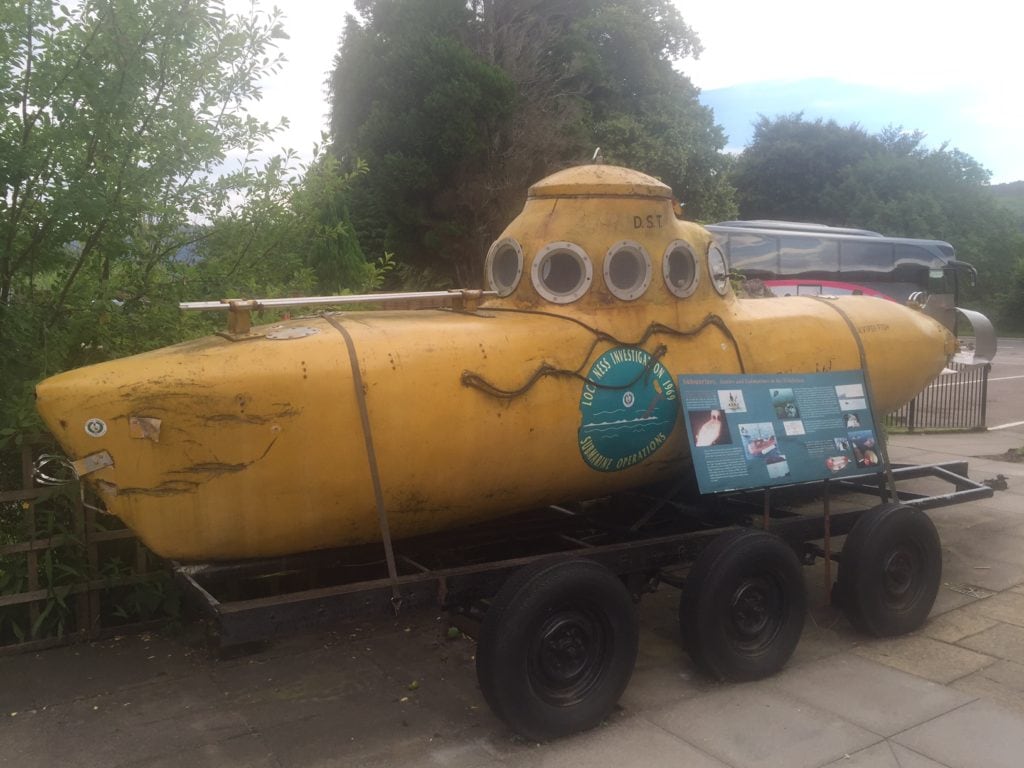 Submarine used in the 1969 Investigation

Instead of a video, the last room has several exhibits.  I enjoyed the section about the eyewitness accounts, it was interesting to hear the conviction in their stories.  I also thought it was interesting that they showed two Styrofoam heads which used to be identical until one was taken down 230M to the bed of the Loch.   That head got compressed and puts the depth of the water into perspective.  The Loch Ness Centre also has a gift shop where you can get your Nessie souvenirs. 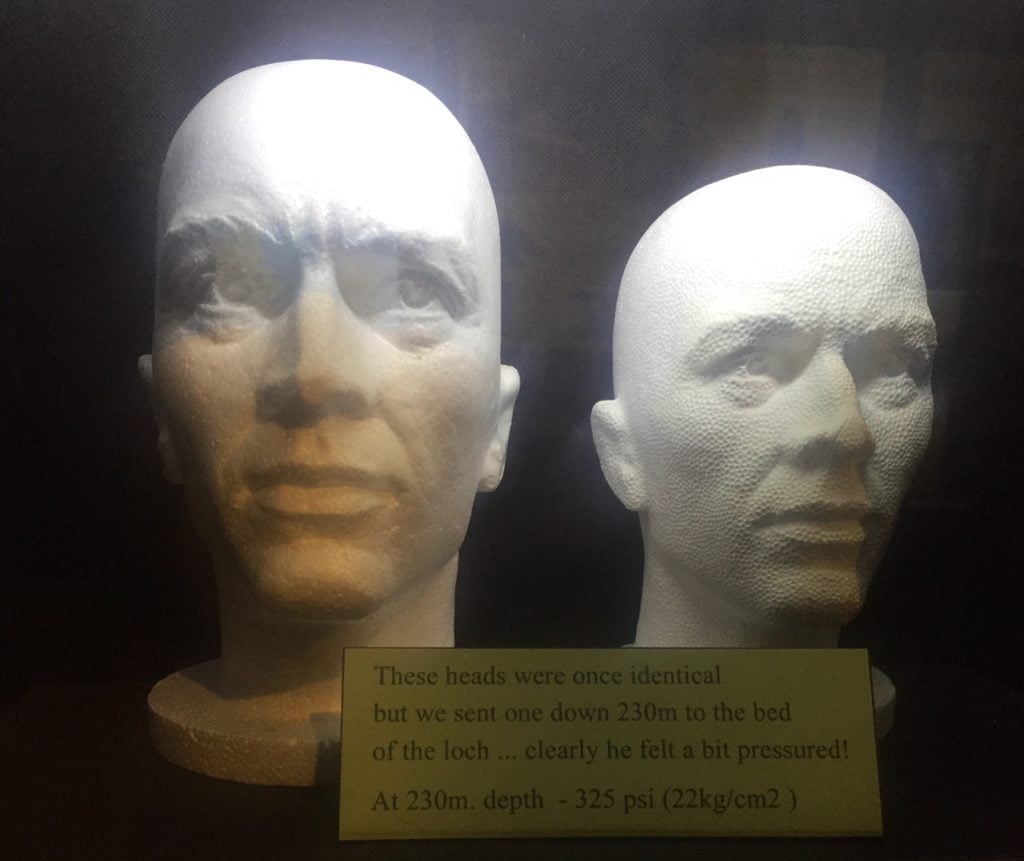 That evening, we planned to go on the lake with Cruise Loch Ness to see if we could spot Nessie for ourselves.  The boat leaves from Fort Augustus Loch Ness, at the south end of the lake.  Before we boarded the boat, we went across the street and explored the locks of the Caledonian Canal, which were actually built in the early 1800s! 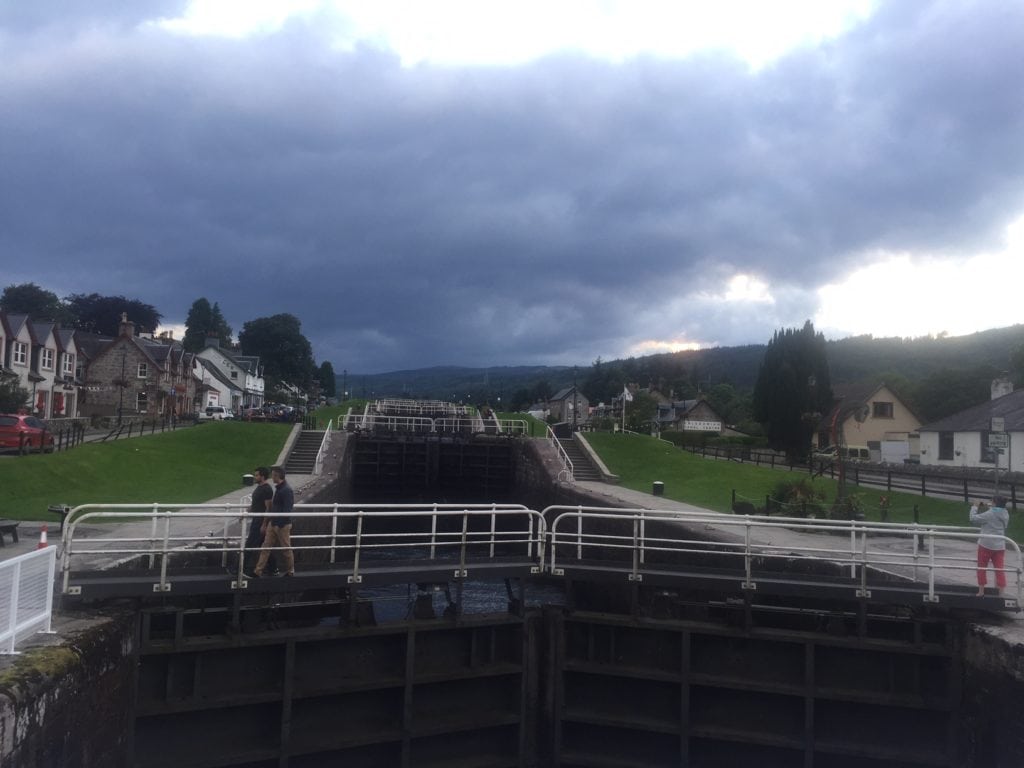 The locks of the Caledonian Canal 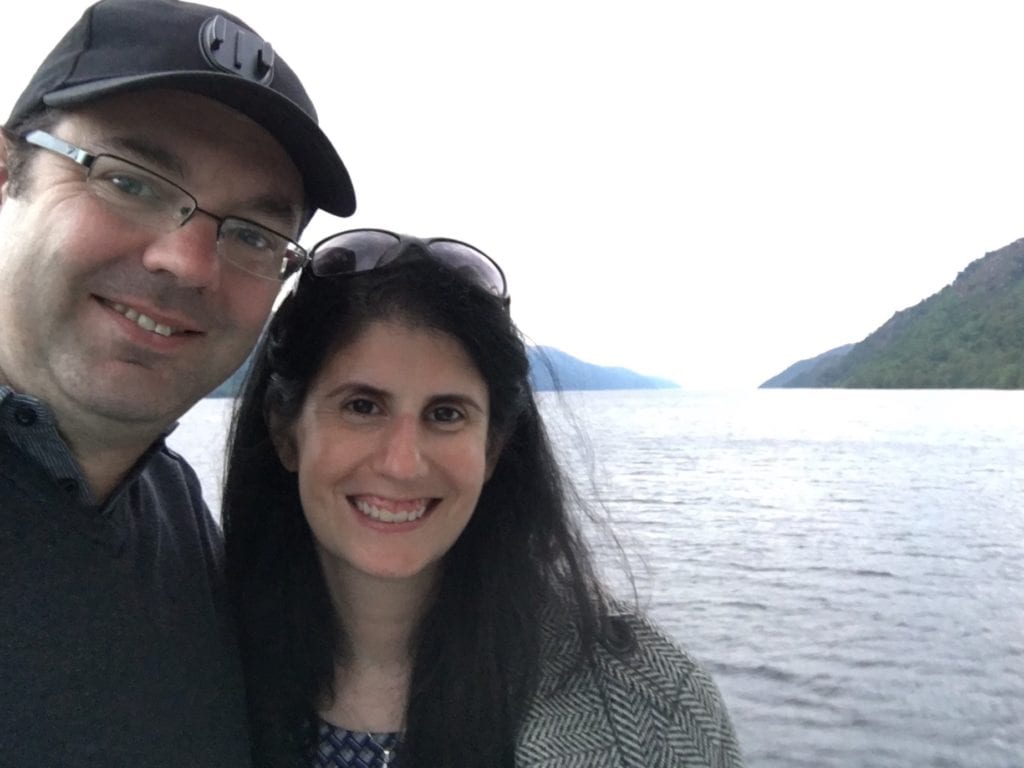 Selfie with Russell on our cruise

The Loch Ness boat tour left promptly at 8 pm just as the sun was about to set.  The boat had two levels, and we sat outside on the top deck since the weather was nice.   Our tour guide narrated as we went along the coastline admiring the scenery.   I wasn’t expecting to see any wildlife on our Loch Ness cruise, but thanks to the good eye of our tour guide, he pointed out several sheep and deer hidden in the woods.  We also saw cormorants.  The silhouette from these birds may have led to some Nessie sightings.  Our guide also pointed out a section of the shore area called the horseshoe, where missing vegetation creates a horseshoe shape.  Of course, the story is that the mountain was damaged by Nessie trying to escape! 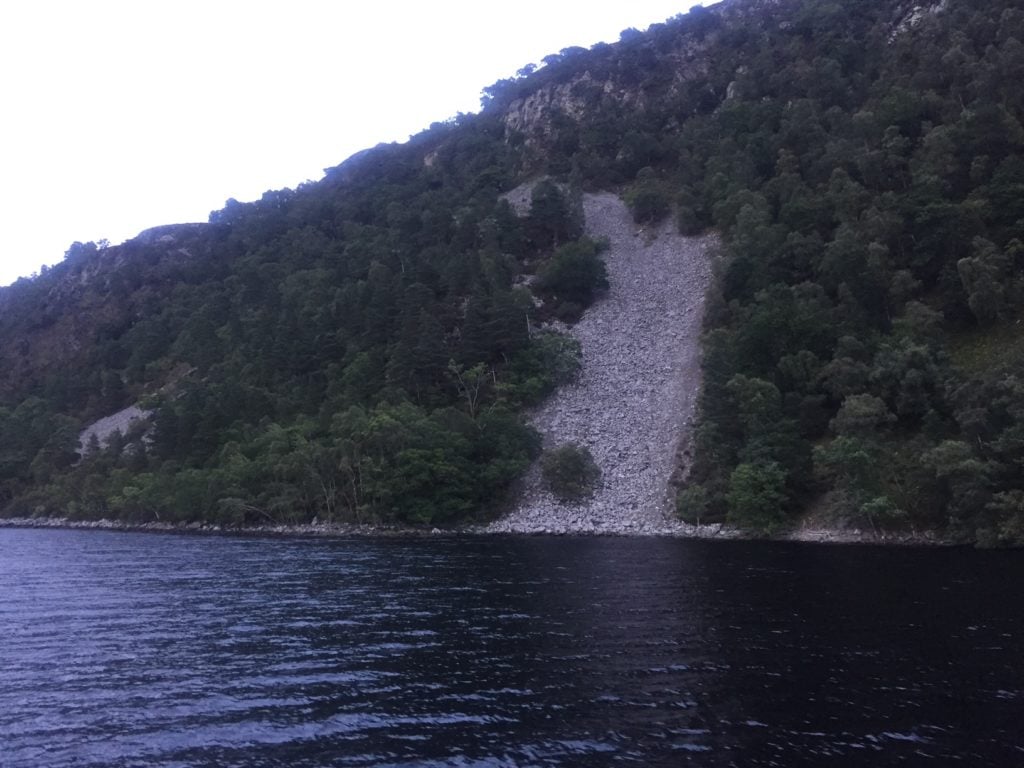 The area where Nessie tried to escape

Then our tour guide invited everyone downstairs for a sonar lesson.  To be honest, I wasn’t interested in it but figured since it was getting dark I might as well go inside.  However, learning about the sonar was fascinating. We learned how two different screens showed the depth of the water.  One even had dots to show the Loch Ness fish. It was impressive to see how the depth of the lake changes so dramatically. 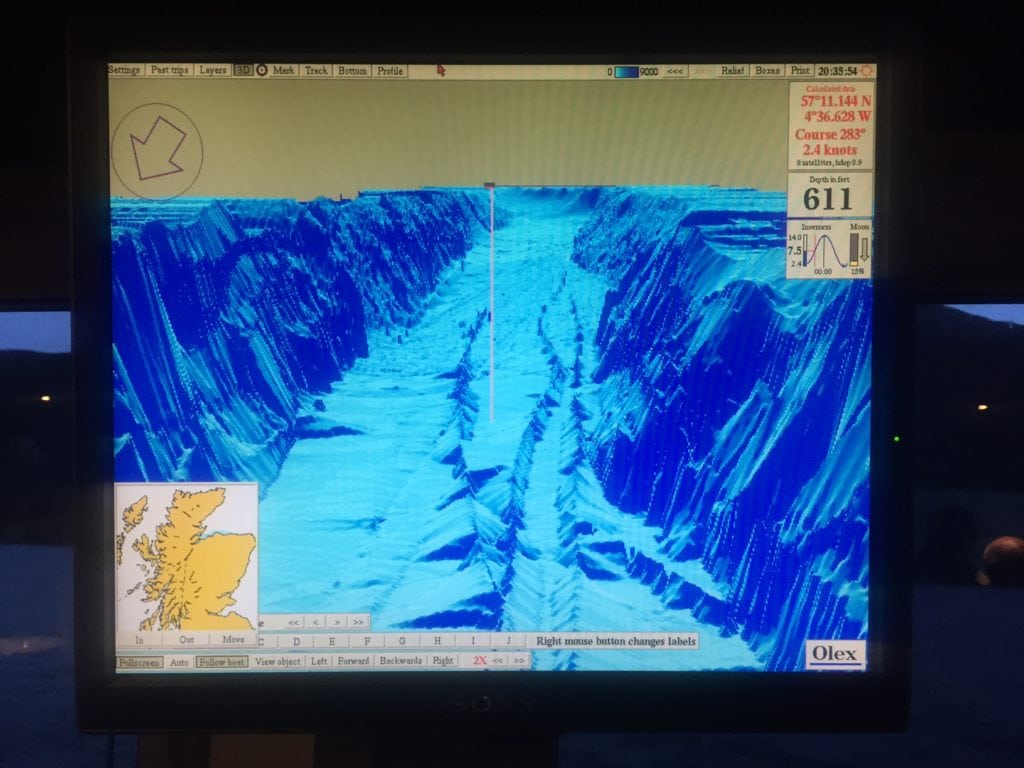 One of the sonar screens that we learned about. You can see the dramatic changes in the depth of Loch Ness.

Then it was time for the part of the cruise on Loch Ness that everyone was waiting for.  Our guide asked if anyone wanted to get video of Nessie.  Of course, I was curious and raised my hand.  Russell and I followed the guide as he helped us get our Nessie video.  Take a look and let me know what you think!?

We had a fun and educational day in Loch Ness visiting the Loch Ness Exhibition Centre and exploring with Cruise Loch Ness.  Our tour guide kept us entertained! We also visited Urquhart Castle.  There are plenty of things to do in the Scottish Highlands. It is a beautiful area and the story of Nessie is definitely intriguing.  You definitely need to do one of the Loch Ness boat trips and search for yourself.

Have you visited Loch Ness or had any usual sightings? What are your thoughts on Nessie?

Disclosure: No financial compensation was received, but we were guests of the Loch Ness Exhibition Centre and Cruise Loch Ness.  As always, opinions expressed here are my own. 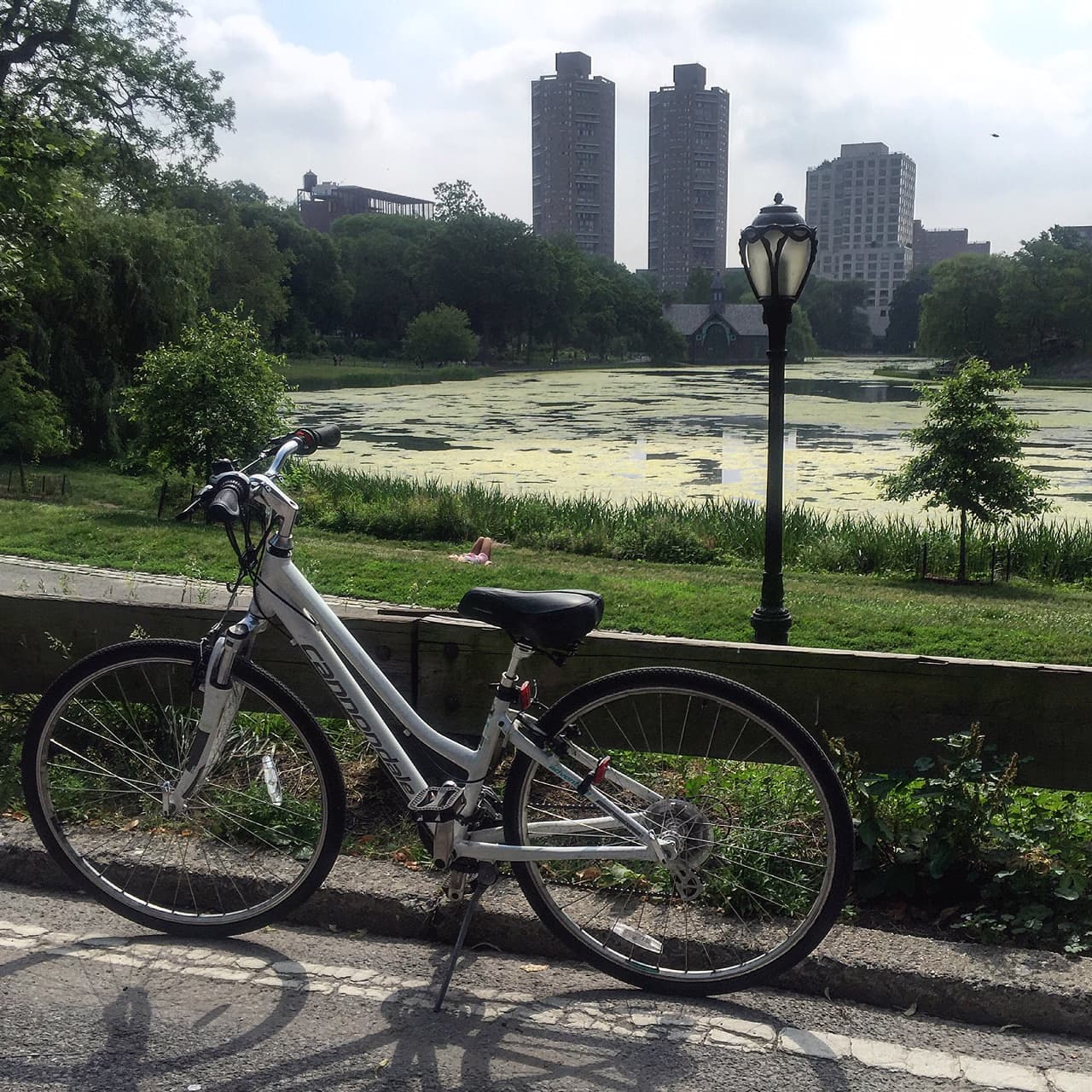 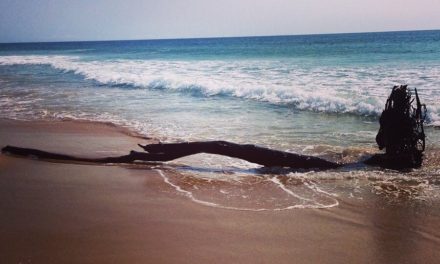 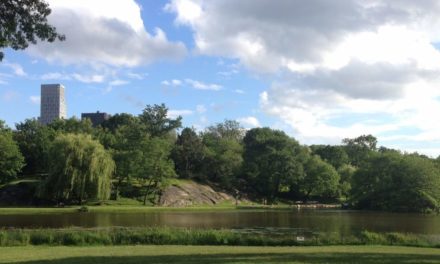 The Hidden Gems in Northern End of Central Park 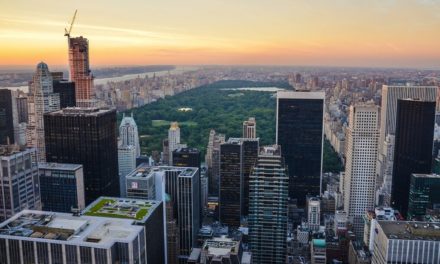