Sea to Skye: Driving from Inverness to Isle of Skye Scotland 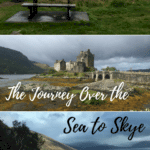 You may have heard of the Scottish song “Over the Sea to Skye”? It is about Bonnie Prince Charlie’s escape to Isle of Skye in a small boat after his defeat at the Battle of Culloden in 1746.  Well, I was looking forward to the 120-mile drive from Loch Ness / Inverness to Isle of Skye because I had heard it was very scenic.  We also planned to stop to visit Eileen Donan Castle, which is the most photographed castle in Scotland.

There was rain in the forecast, but luckily we had some pockets of nice weather.  And even when the weather wasn’t great, the clouds added to the Skye scenery.  Let me share how we spent our Sea to Skye road trip day driving from Loch Ness to Isle of Skye. 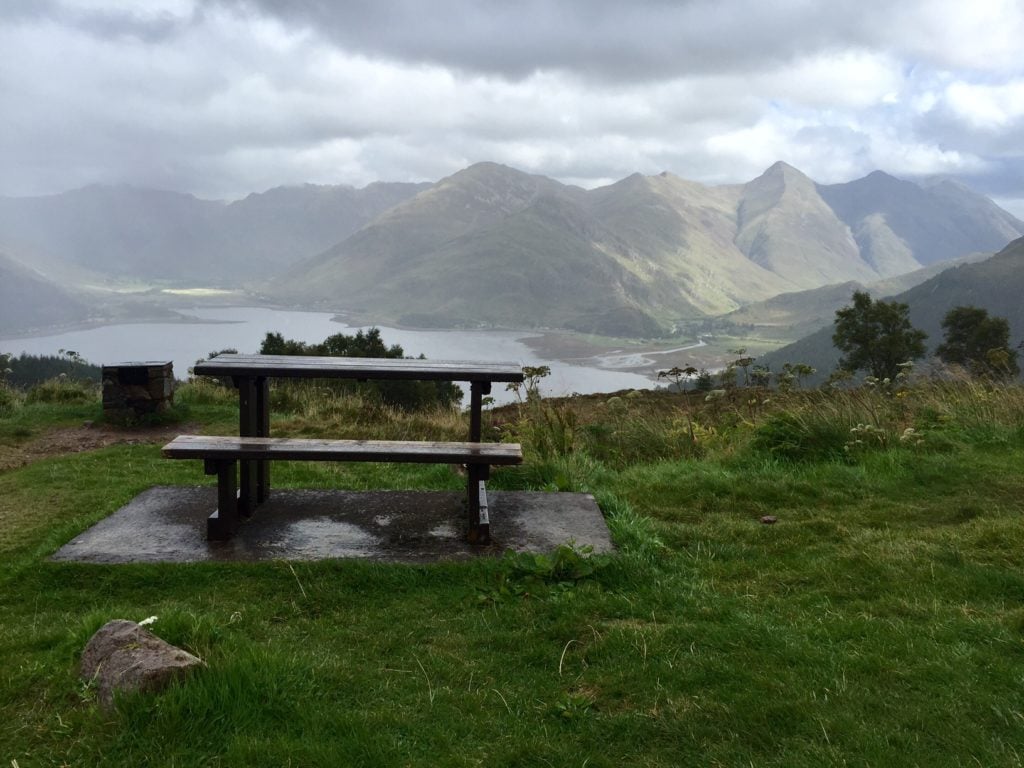 We spotted this picture perfect picnic place on our way back.

Driving to Isle of Skye

While I expected the trip to Skye would be scenic, I wasn’t expecting to see so many waterfalls.  The mountains were so majestic and there weren’t too many other cars on the road.  We stopped several times to take pictures, but there were times we wanted to stop but there just wasn’t room to stop the car.  We were lucky we didn’t run into too many Scottish midges.

From Inverness to Skye by car, it took us about 3 hours (not including the time we spent at Eileen Donan Castle).  If you’re not up to the drive yourself, you can look into doing an Isle of Skye tour. 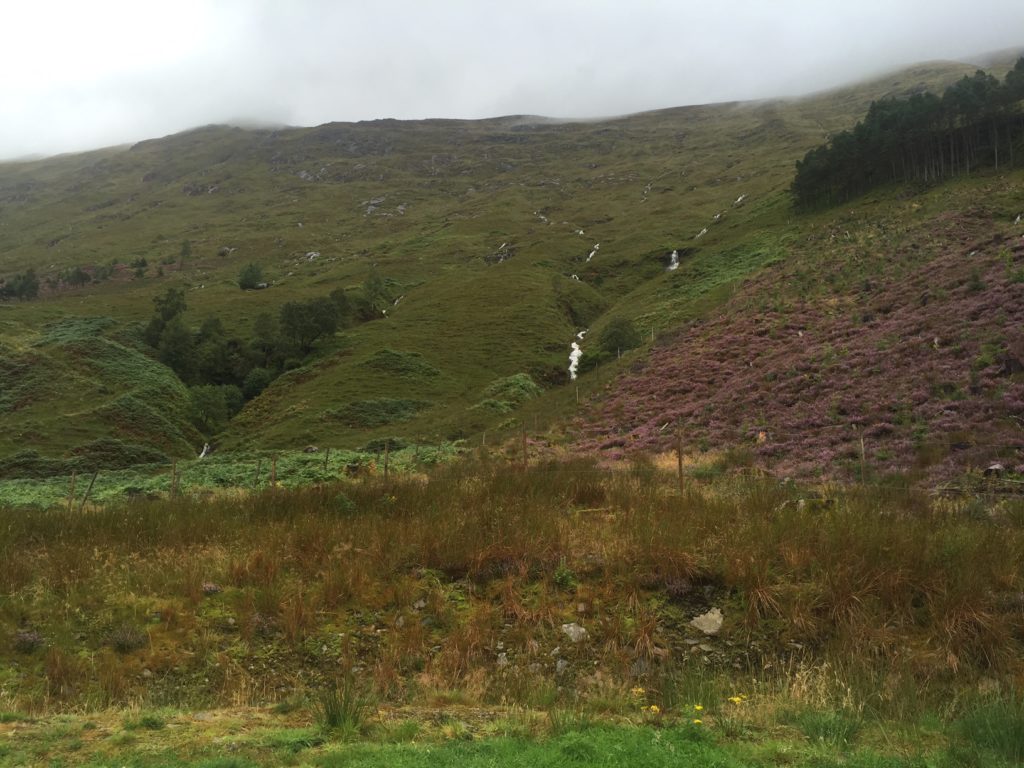 I was surprised by how many waterfalls we saw!

We could see Eileen Donan castle as we approached it.  It is situated on an island where 3 lochs (Loch Duich, Loch Long and Loch Alsh) meet.  It had been raining but remarkably stopped a minute or so after we got out of the car.  Perfect timing for some pictures.  Then we picked up our tickets and crossed the bridge to the island.

The castle pretty much takes up the whole island, but I still wanted to explore outside while the rain had stopped.  We walked around the outside of the castle and the views are lovely.

You may have seen the castle before in a film or on television.  It was in Highlander and the James Bond film The World is Not Enough, just to name a few.   The castle is also very popular for weddings.  They don’t have any really big rooms so they can only accommodate 90 guests for a ceremony inside the castle.  The price for renting out the castle for a wedding is only £1500.

Unfortunately, inside the castle, no photography is allowed.  The first few rooms of the castle are dedicated to telling its story.  The castle was first built in the 12th or 13th century possibly by King Alexander II or III as a defense against the Danes. There were several battles and the castle changed hands several times, similarly to what happened at Urquhart Castle.  In 1719, most of the castle was destroyed in a battle between the Spanish and the Jacobites. 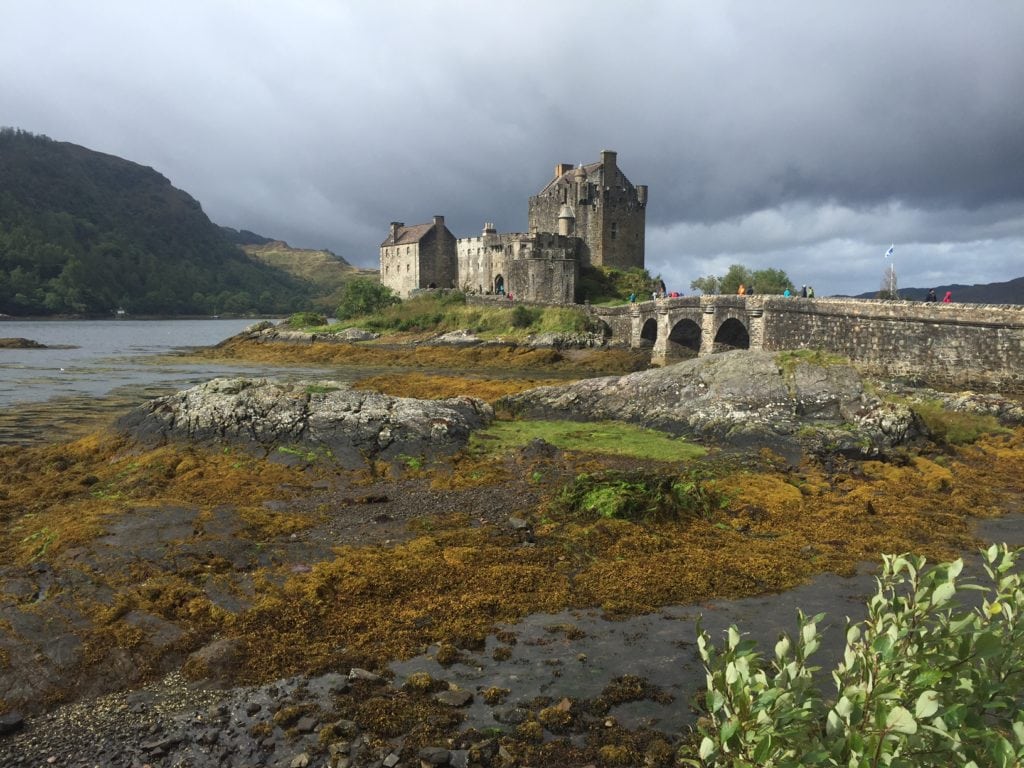 You can see why Eileen Donan castle is the most photographed in Scotland.

The castle lay in ruins, unoccupied for almost 200 years when it was purchased by John MacRae-Gilstrap.  After 20 years of construction, the castle formally opened again in 1932.  In 1952, John MacRae, the grandson of John MacRae Gilstrap opened the castle to the public.  I have to say I was very impressed with the reconstruction job they did.  You really feel like you are in a castle built in medieval times.

The other rooms in the castle are decorated as they might have been when the castle was actually occupied.  They are also filled with lots of impressive artifacts and mementos from the MacRae family.   As you explore the rooms of the castle, be sure to look out the windows.  The views of the surrounding areas are stunning. 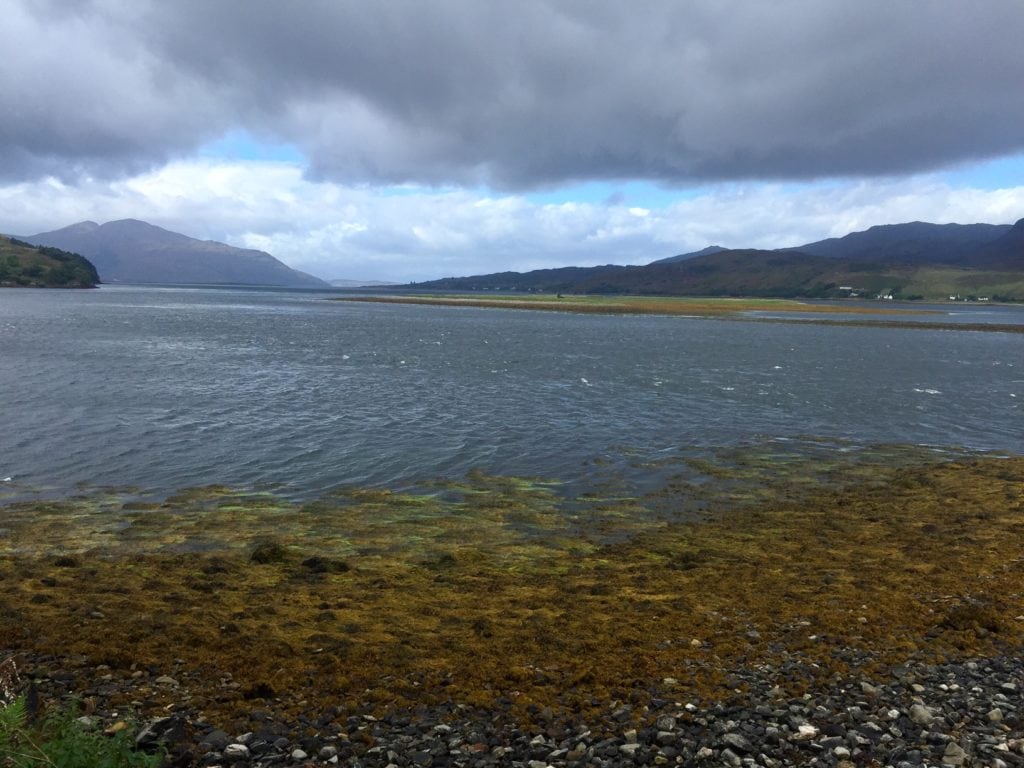 The view from Eileen Donan castle.

One artifact that particularly caught my attention was a painting of Winston Churchill’s funeral by Terrence Cuneo.  He was also the official artist of the coronation of Elizabeth II.  The painting was a who’s who of the time including the royal family.  There was a handy document that helped you figure out who the people were.  I was also curious about how the painting got to the castle.  I asked the staff and learned that the Lord Mayor James Miller of London was the grandfather of James Miller who married into the MacRae family.

It was also interesting to learn that the Eilean Donan Castle has the only working portcullis in the Highlands.  A portcullis is a heavy vertically-closing gate typically found in medieval fortifications, consisting of a latticed grille that slides down to seal off an entrance. 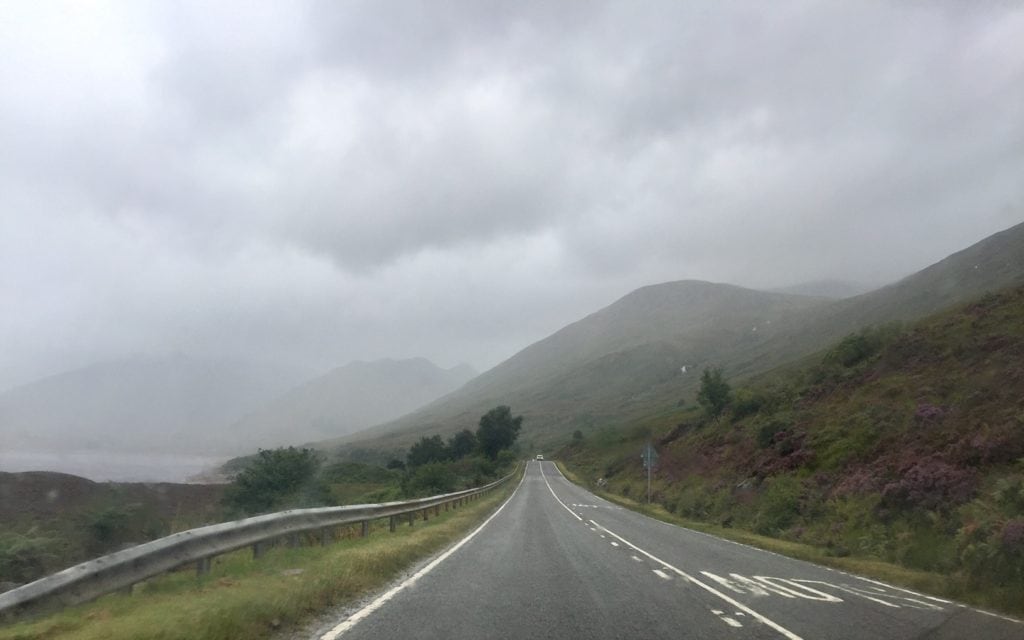 Sometimes I think the clouds make an area even more scenic.

After about an hour of exploring the castle, it was time to continue on our journey.  To get to Isle of Skye you can either take a ferry or drive over the bridge.  Going there we decided to take the Isle of Skye bridge so that we didn’t have to worry about getting tickets or the ferry schedule.   Another positive about the bridge is that it is free.

Once you cross the Skye bridge, your drive is not quite over.  You still need about an hour on your Isle of Skye driving itinerary to get to Portree, the main town on the Isle of Skye.  Getting around Skye can often take longer than expected because of the narrow roads.

Leaving on the Isle of Skye Ferry

Leaving Isle of Skye, we decided to take the old ferry.  Originally built in 1969, it is the only manual turntable ferry left in the world.  I had never even heard of a turntable ferry but it is a boat that has something almost like a lazy susan on it that the crew can spin so that cars can get on and off.  It is a small ferry, I think the maximum capacity is 6 cars and they pack them in.  The Isle of Skye ferry costs £15 per vehicle. 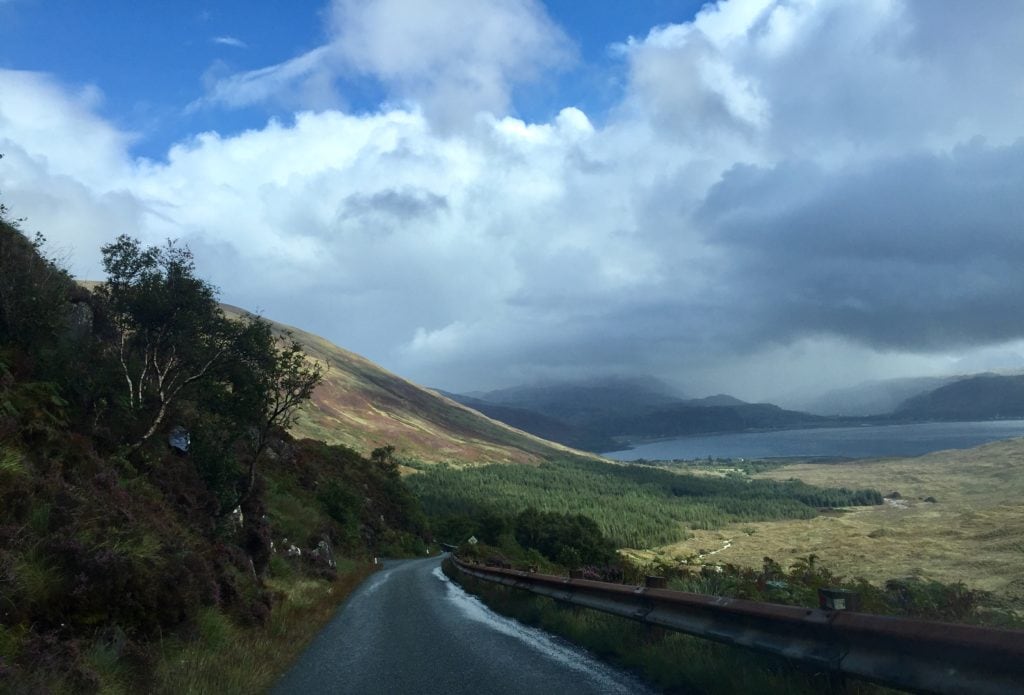 The road to the old ferry on Isle of Skye had stunning views and lots of waterfalls.

The old ferry leaves from Kylerhea and goes to Glenelgs.  The ride takes about five minutes to cross.  While the ferry technically leaves every 20 minutes, we had to wait a little longer than that.  The ferry was not full when we took it and there was a couple on it without a car.  You can get out of your car for the brief crossing, as long as you can open your door.  Russell had to climb over and get out on the passenger side.

Our ride was very calm but I read that at peak tides it can be rough.  Many people also spot wildlife on the crossing, but we didn’t see anything.  The scenery is really beautiful though.  Not just on the ferry, but the road to Kylerhea and the road from Glenelgs were both beautiful.  You can get a sense of it from watching the video below.

So you know how they say to enjoy the journey, well, traveling from Loch Ness to Isle of Skye that is easy to do.  Scotland has so much beautiful scenery and the Eileen Donan Castle is a fascinating place to explore.  I hope this has given you the inspiration to visit Scotland.

Have you driven to Isle of Skye? Do you know the Bonnie Prince Charlie Song?  I would love to hear about it or other scenic roads.

Expert Tips for How to Get to the Isle of Skye

Disclosure: No financial compensation was received, but Eilean Donan Castle provided us with complimentary tickets so we could share our experience with our readers.  As always, opinions expressed here are my own. 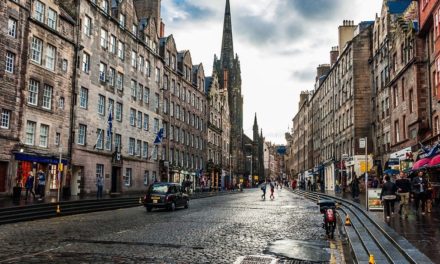 How to Get from Edinburgh Airport to the City Center 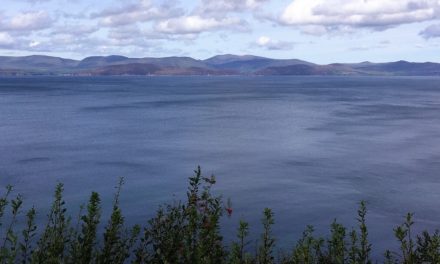 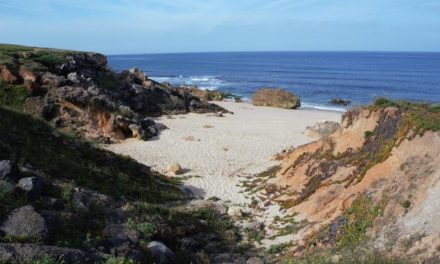 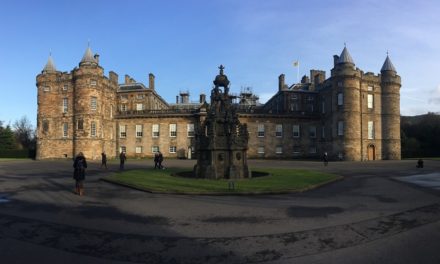 Inside Holyrood Palace: The Queen’s Official Residence in Edinburgh