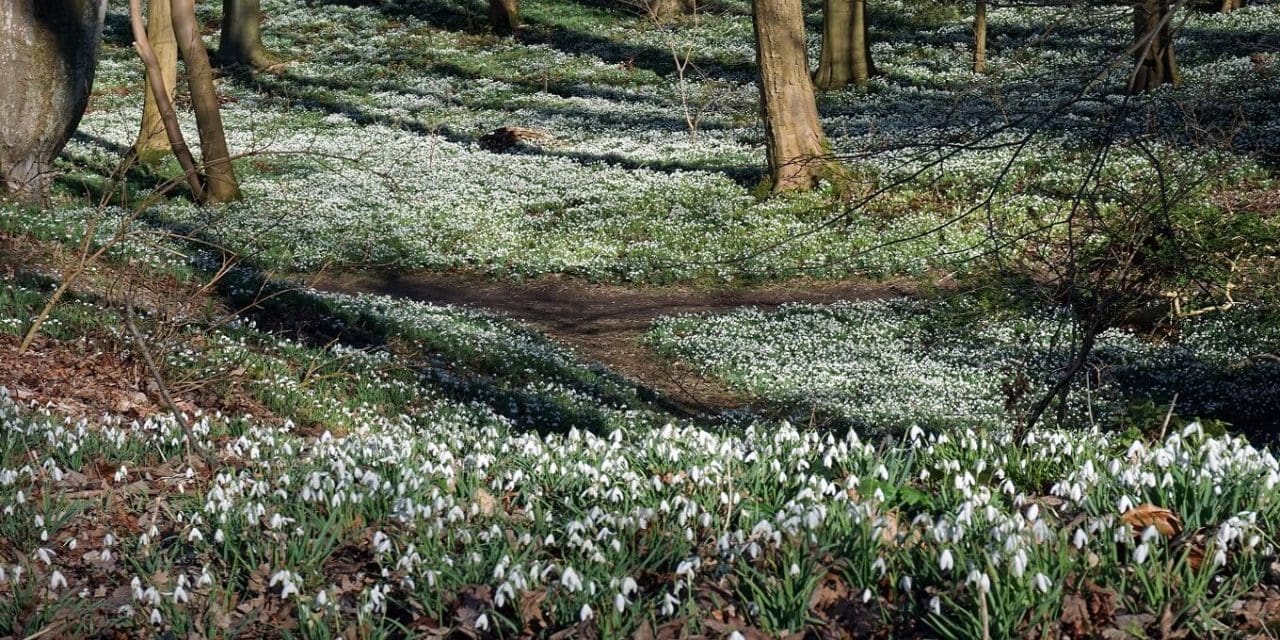 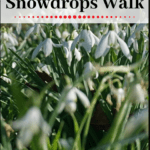 Little Walsingham is one of the holiest places in England.  Hundreds of thousands of pilgrims visit this small village in Norfolk each year.  For us, it wasn’t a religious reason that led us to Walsingham.  I wanted to see the snowdrops at Walsingham Abbey, but I was also inspired by visiting the Walsingham pilgrimage sites.

On my travels, I have stumbled upon a few pilgrimage sites – Fatima, Portugal and the Camino de Santiago.  I had no idea there was one so close to home (I am currently based in Norwich, England).  At one point, the Walsingham village was one of the most important places in Norfolk.  Henry III visited several times as did every monarch up to and including Henry VIII.

Let me tell you more about the history of Walsingham and what there is to see.  It is definitely worth a visit especially when the snowdrops are in bloom. 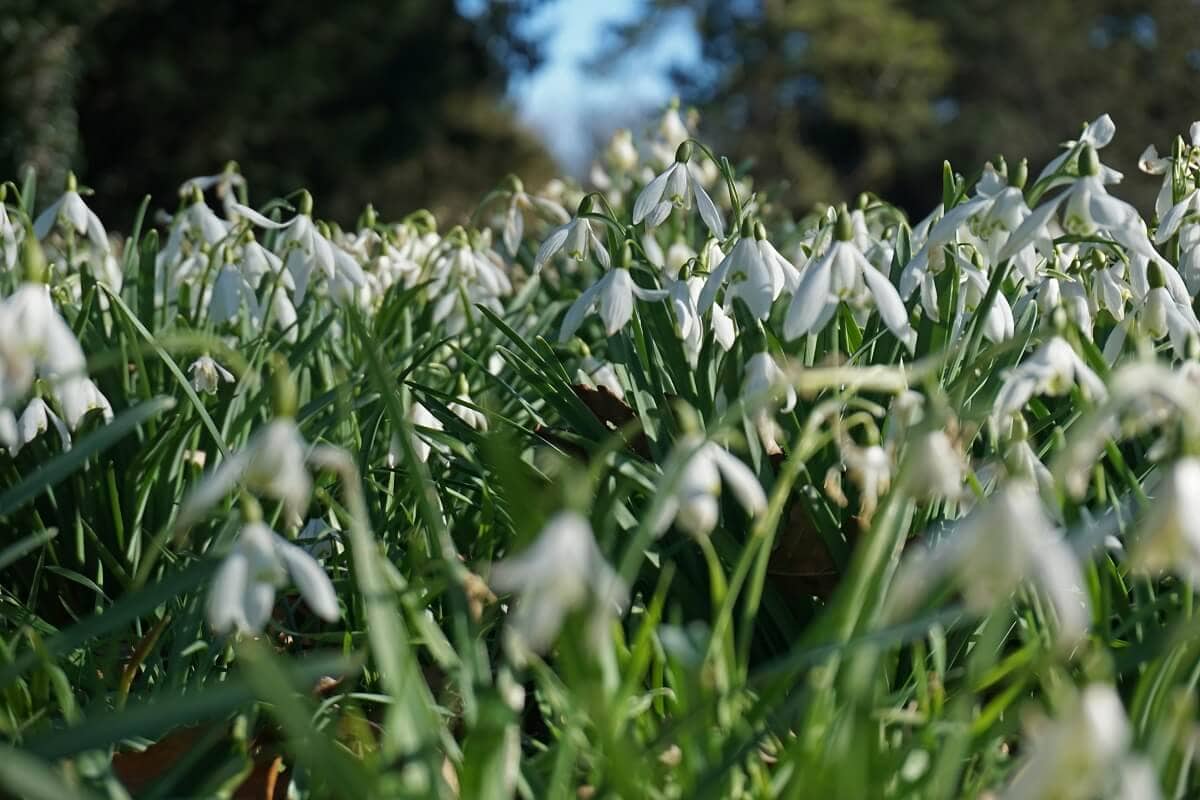 You can see why these flowers are called Snowdrops.

The official scientific name for English Snowdrops is Galanthus.  They were brought to England from southern Europe and Turkey.  The snowdrop flowers thrive in shaded wooded areas and usually grow in clusters.

These white flowers bloom January until mid-March.  Since these are the first flowers of spring, blooming when it seems still to be winter, they are symbolic of new life and renewal. The snowdrop and primrose our woodlands adorn, And violets bathe in the wet o' the morn. - Robert Burns Click to Tweet 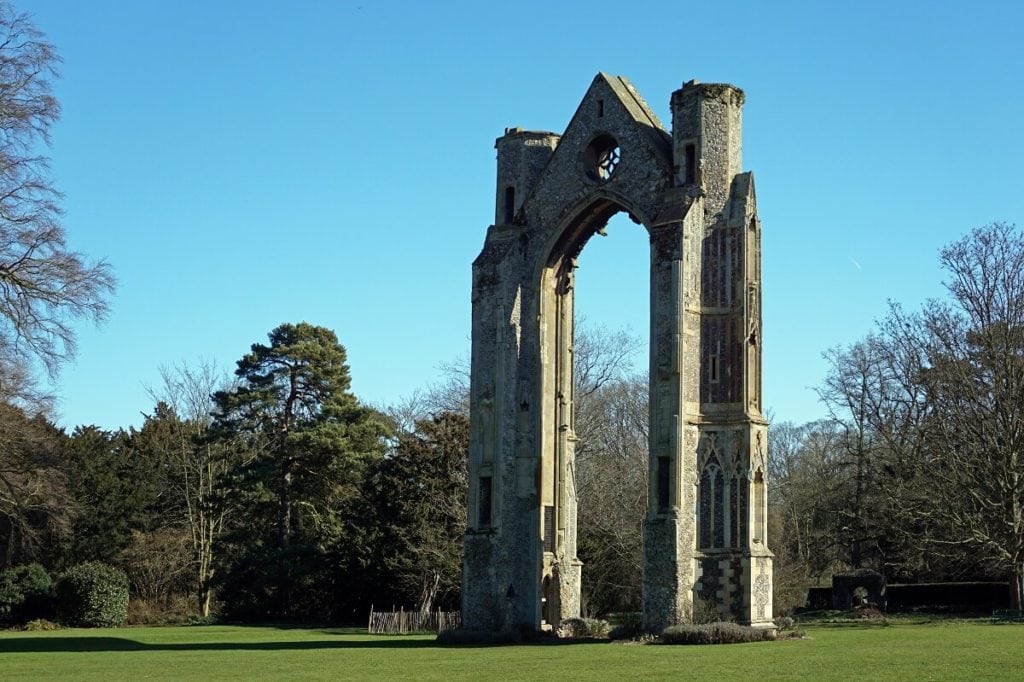 The little that is left of Walsingham Abbey, is pretty impressive.

Walsingham Abbey is now just ruins, but I could imagine how impressive it must have been in its heyday.  You can see the East Window, which is all that remains of the Priory, from outside the grounds because it is so tall.

We almost missed the Crypt, which had a nice timeline exhibit inside it and heating!  Look out for the signs pointing you to the Crypt by the ruins of the Refectory on the south end of the property.

The Shirehall Museum serves as the entry to the Abbey grounds and is included in your admission.  Inside the small museum, you can learn more about Walsingham history and both the original and modern pilgrimage traditions.  Around the corner from the Abbey on High Street, you will find the Walsingham Pilgrim Shop which has a nice selection of religious souvenirs. 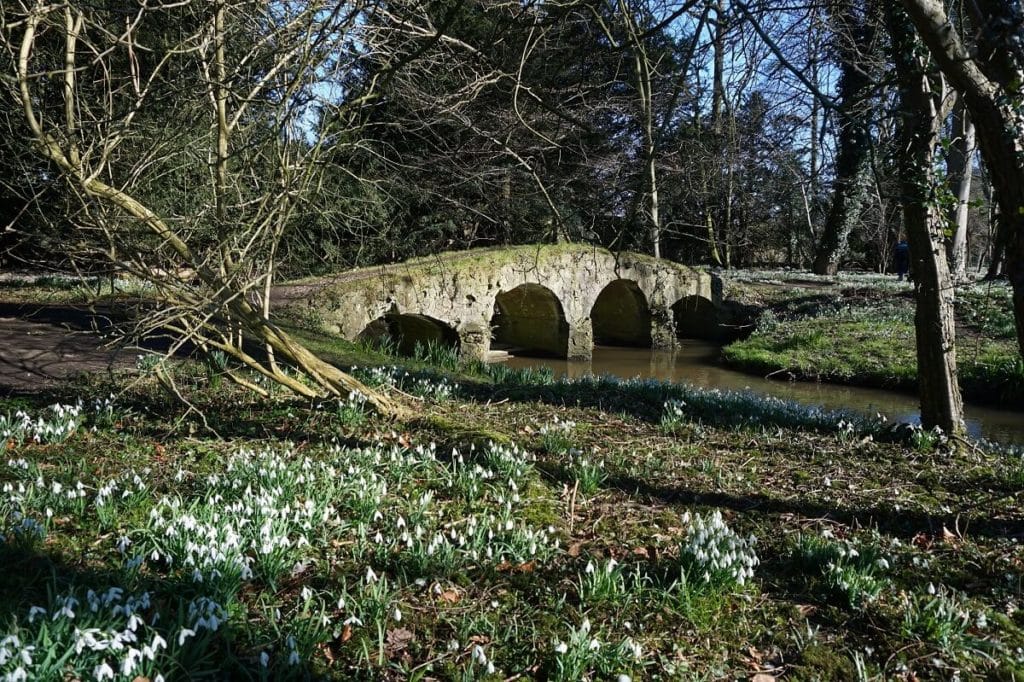 This beautiful bridge is made from stones from Walsingham Abbey.

The Walsingham Abbey is one of the best places in England to see snowdrops. For £5 per person, you gain access to the Abbey grounds (18 acres!) that are covered in snowdrops.  This price also includes a cup of coffee or tea from the nearby Walsingham Farm Shop.

There are several paths that you can follow.  Even though it was a bright sunny day when we were there, the paths were muddy, so be sure to wear suitable footwear if you visit.  There is also a stream that runs through the property with several picturesque bridges going across it.  We spent about an hour walking around and taking pictures of snowdrops. 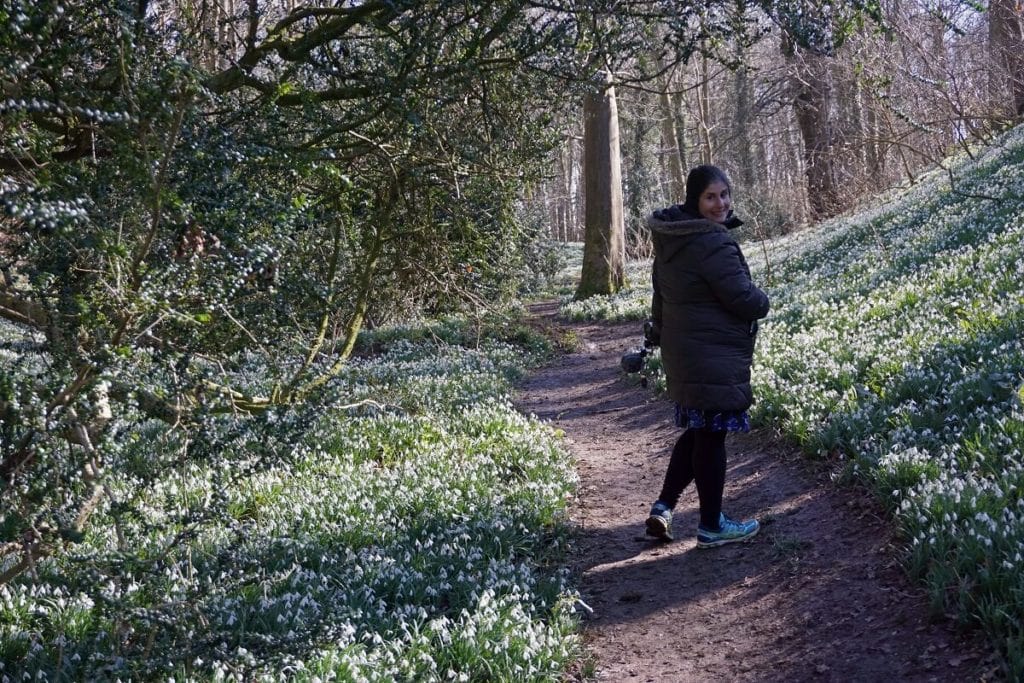 Anisa walking on the path through the snowdrops.

We saw the pop-up shop inside the Abbey, but unfortunately, you cannot redeem your free coffee or tea there.  It’s a pretty clever way to get you inside their store which is just a short walk away.

I hadn’t planned on buying anything else but they had so many tempting products.  We couldn’t pass up the real black pudding, which we cooked up as soon as we got home. (If you are curious about black pudding, you can find more information about it in my post about a few of my favorite British Foods).

We also bought a package of cookies that was 50% off of the regular price.  We loved both the black pudding and the cookies.  Additionally, we sampled some of their Stilton cheese which was fabulous.  Next time I am in the area, I will definitely stop by the Walsingham Farm Shop.  They do also have a small stall at Norwich Market.

Walsingham became a pilgrimage site because of the apparitions that took place In 1061. Lady Richeldis, the widow of the lord of the manor of Walsingham Parva, had a vision of the Virgin Mary. In the apparition, Mary took her to Nazareth to show her the place where the Angel Gabriel had appeared to her. Mary told Richeldis to take note of the measurements of the Holy House and build a copy of it in Walsingham.

She did as she was told and built the Holy House.  Inside it, they kept a wooden statue of an enthroned Virgin Mary with the Jesus seated on her lap. Years later, the Priory was built around the Holy House. 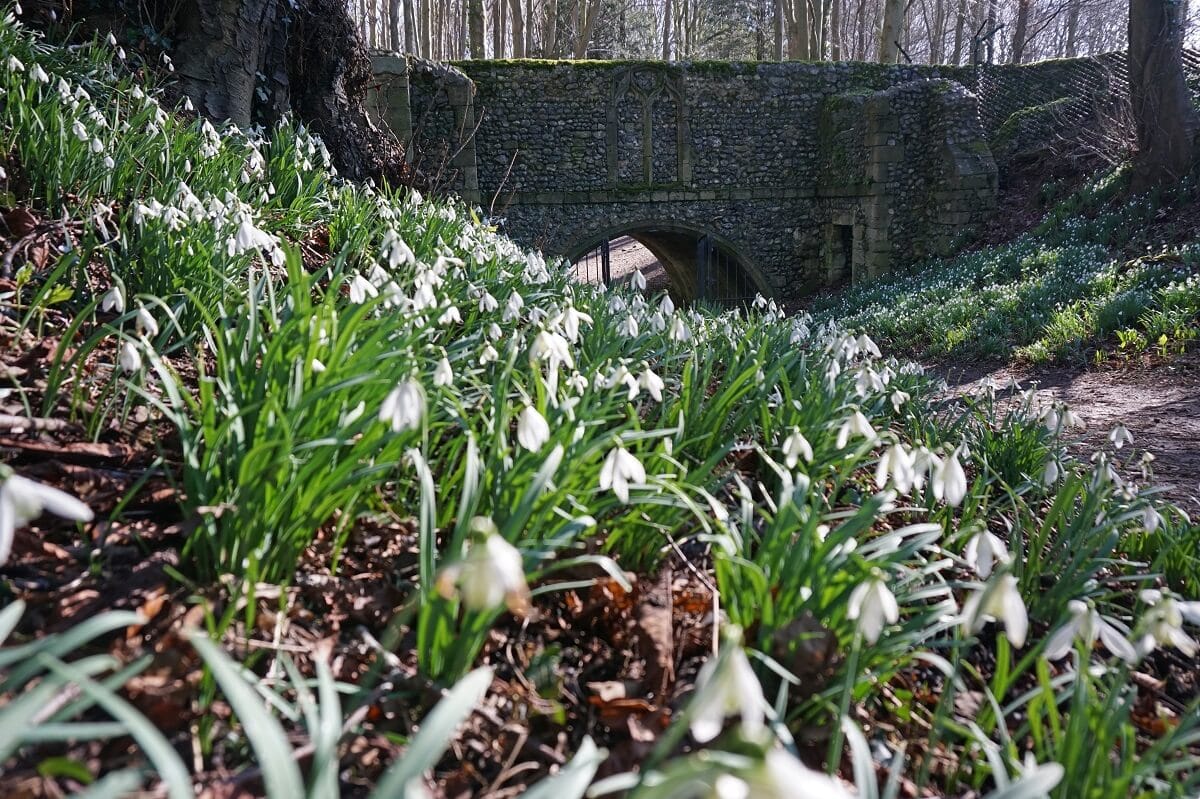 It’s a lovely walk around the grounds of Walsingham Abbey with all the snowdrops.

Walsingham became known as “England’s Nazareth”, due to the Holy House replica built by Lady Richeldis.   The main route pilgrims would take from London to Walsingham, Norfolk, took them via Waltham Abbey, Newmarket, Brandon, Swaffham, Castle Acre Priory, and East Barsham.  Pilgrims from Europe and the north of England would travel by boat arriving into King’s Lynn or other smaller ports along the North Norfolk coast, like Wells, Blakeney or Cley.

It was an important pilgrimage site for many years before the Reformation.  Pilgrims would wear badges on their cloaks or hats to show the pilgrimage they did.  Walsingham pilgrim badges varied in shape and size but would have some reference to the Annunciation. 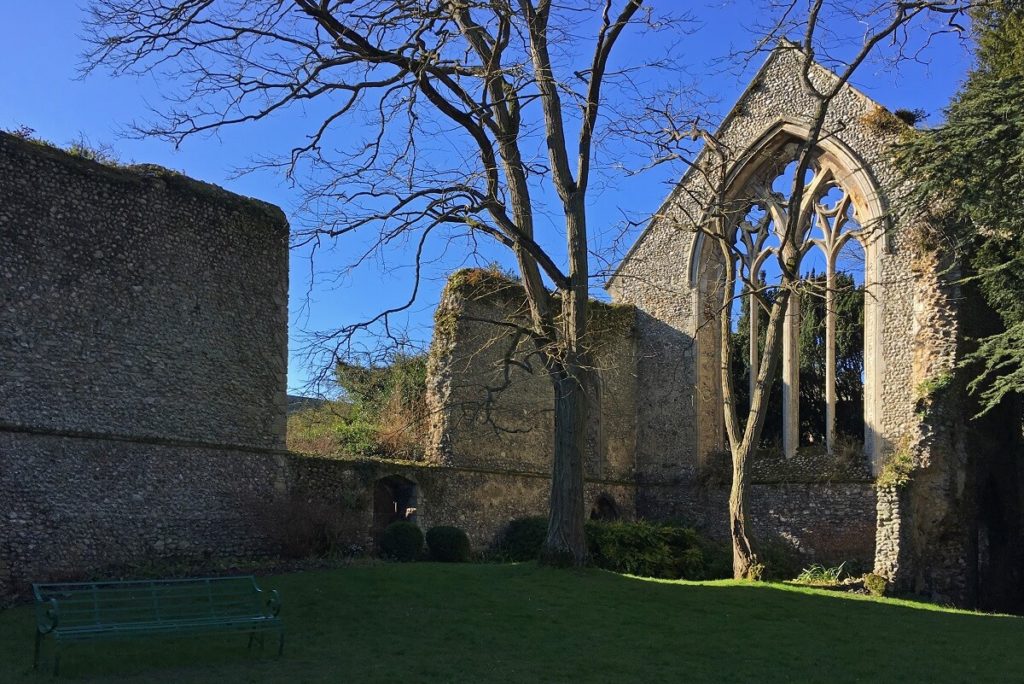 More of the ruins at Walsingham Abbey.

The Reformation in Walsingham

The Reformation played a large role in the history of Walsingham, England.  In order to get a divorce from his first wife, Catherine of Aragon, Henry VIII named himself head of the new Church of England. The crown was also in financial trouble, so many religious buildings were shut down (Dissolution of the Monasteries) and the assets were seized.

In 1538, the Walsingham Priory and the Friary were dissolved and all property handed over to the King’s Commissioners. They took the Our Lady of Walsingham statue to London to be publicly burnt.

Unfortunately, now nothing remains of the original shrine but there is a sign on the lawn in the Abbey grounds to mark the site of the shrine. After the destruction of the Abbey, Walsingham declined as a place of pilgrimage, but it never lost its place as one of the most significant religious sites in the country.

Anglican Chapel: Our Lady of Walsingham 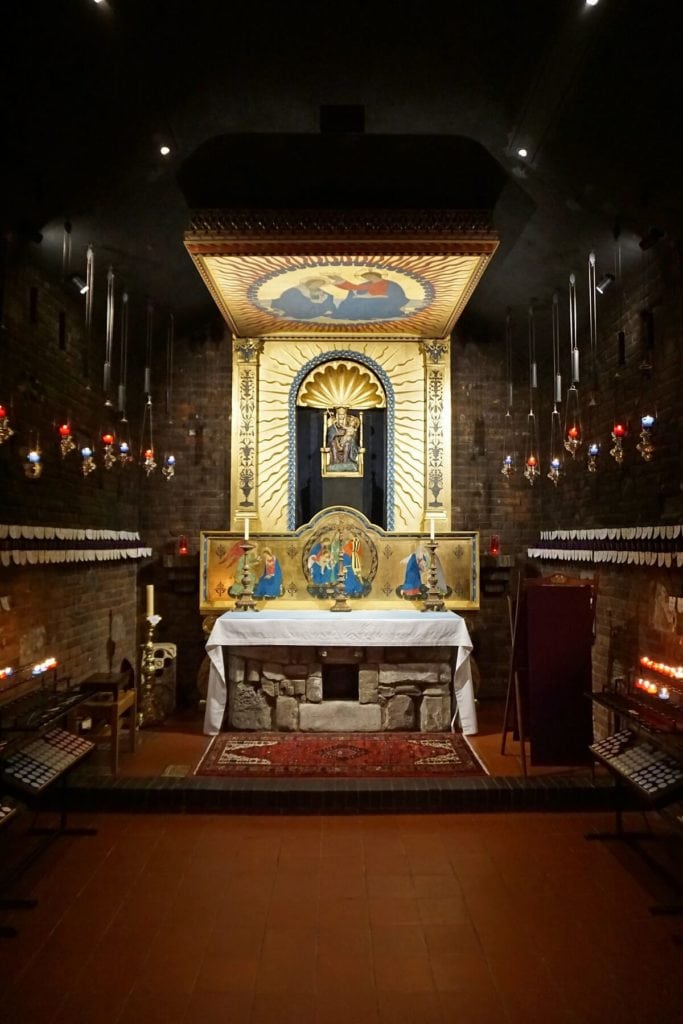 This is the Holy House inside the Walsingham Anglican Shrine.

You can go inside the Holy House and try the Holy Water, although there is a warning that the water is not safe for children.  We drank a little bit of the water and did not have any negative side effects.  We will see if any good comes out of it.

Inside the Anglican Shrine of Our Lady of Walsingham, there are several small chapels for prayer and they have daily services in the main part of the church.  Outside the Little Walsingham church, there is a lovely courtyard.  Around the courtyard, there are more facilities for pilgrims, including dorm rooms and a dining hall.

Also in the early 20th century, Charlotte Boyd purchased and restored the ancient Slipper Chapel and gifted it to the Catholic Church.  It is now known as the Roman Catholic National Shrine of Our Lady and is located about a mile outside of Walsingham in the hamlet of Houghton St Giles.  You have to drive on a single track road to reach the chapel, but there is plenty of free parking.

The Walsingham Slipper Chapel is quite small and can probably hold a maximum of 20 people, but it is part of a larger complex with an outside area.  You can find the Slipper Chapel at the far end of the complex from the parking lot.  On our short walk there, we spotted a nun.  Close to the chapel, there is also a gift shop.  You can even buy some of the holy water.

This was the final “station” on the Walsingham pilgrimage route. It was here that pilgrims would take off their shoes to walk the final “Holy Mile” barefoot.  It was freezing when we visited, yet we still saw a few people doing the walk barefoot.  You have to admire people with that kind of dedication. 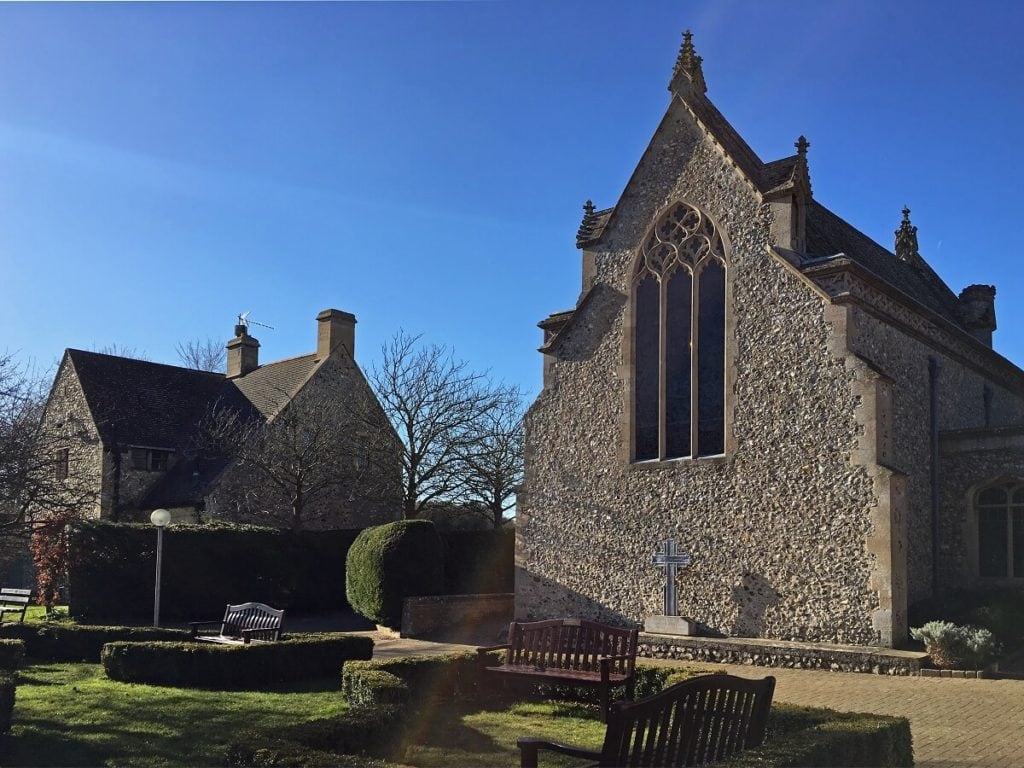 The Slipper Chapel is small but significant.

Little Walsingham is a fascinating place to visit.  The village is beautiful. I was moved learning about the pilgrimage and visiting the Walsingham Shrine.  Seeing the pretty snowdrops was a nice bonus.  I hope to make it back in the summer to ride the steam train.

Have you visited any places that have moved you? 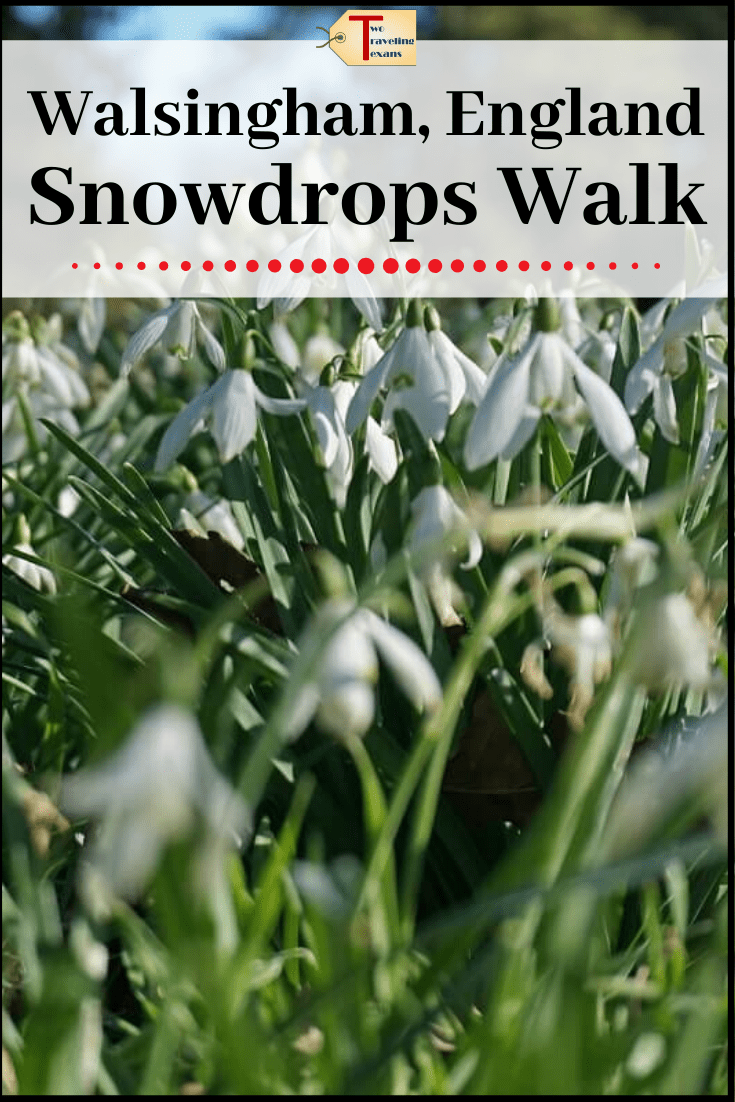 As an Airbnb Associate, I earn when you book through my link. 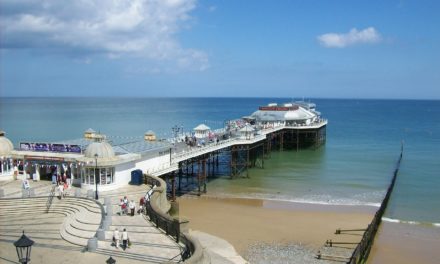 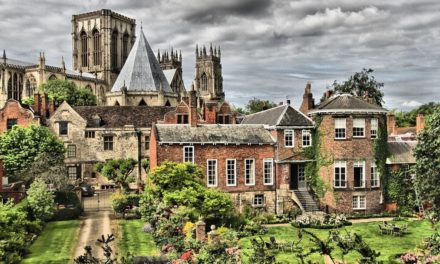 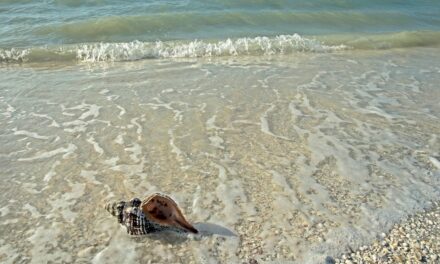 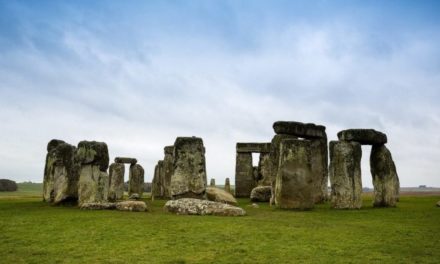 Stonehenge: Centerpiece of an Ancient Landscape