Why I Fell in Love With Gaudi in Barcelona 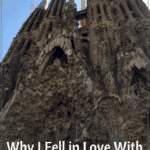 I only spent two days in Barcelona but it didn’t even take me that long to learn that Antoni Gaudi is a genius.  Gaudi was a Spanish architect who lived from 1852 to 1926.  He had a vivid imagination and it shows in his designs.  It is clear he was well ahead of his time.

It may sound like I am exaggerating as I describe some of the places, but honestly, I was thoroughly impressed.  I am not the only one who thinks this, many of his projects have been designated UNESCO World Heritage Sites.  One of my priorities was to see as many of Gaudi buildings in Barcelona as I could in my short time there.

La Sagrada Familia is a basilica designed by Gaudi, still currently under construction.  After more than 130 years, it is scheduled for completion in 2026.  I have been to many amazing churches across the world (St. Patrick’s, St. Peter’s, St. Paul’s and more) but in my mind, La Sagrada Familia tops them all.  It’s one of the things you must see in Barcelona. 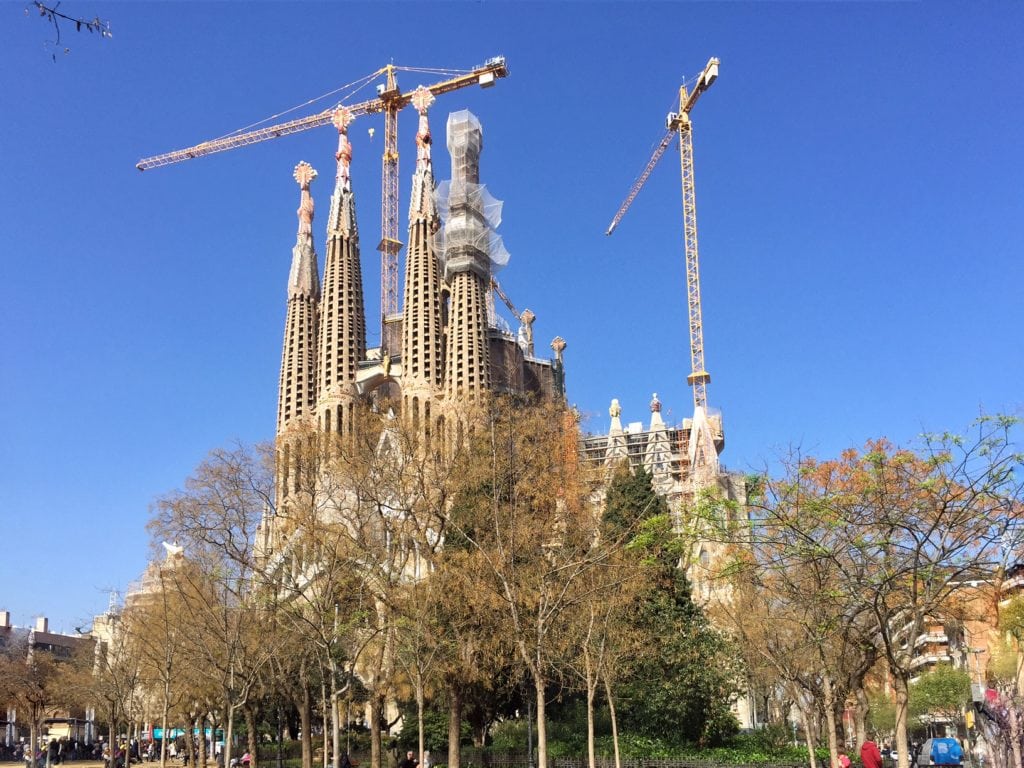 La Sagrada Familia under construction for the last 130 years!

If you plan on visiting La Sagrada Familia while you’re in Barcelona (and you must) get your tickets in advance!  There are several different ticket options but all are timed entry.  The cheapest option is to just buy entry into the cathedral for 15€ each.

We decided to splurge and go for the most expensive option.  For 29€ per person, you get access to the cathedral, an audio guide, and you get to go to the top of the towers on one of the cathedral facades.  I wish I would have known about this full tour of La Sagrada Familia with an expert guide. 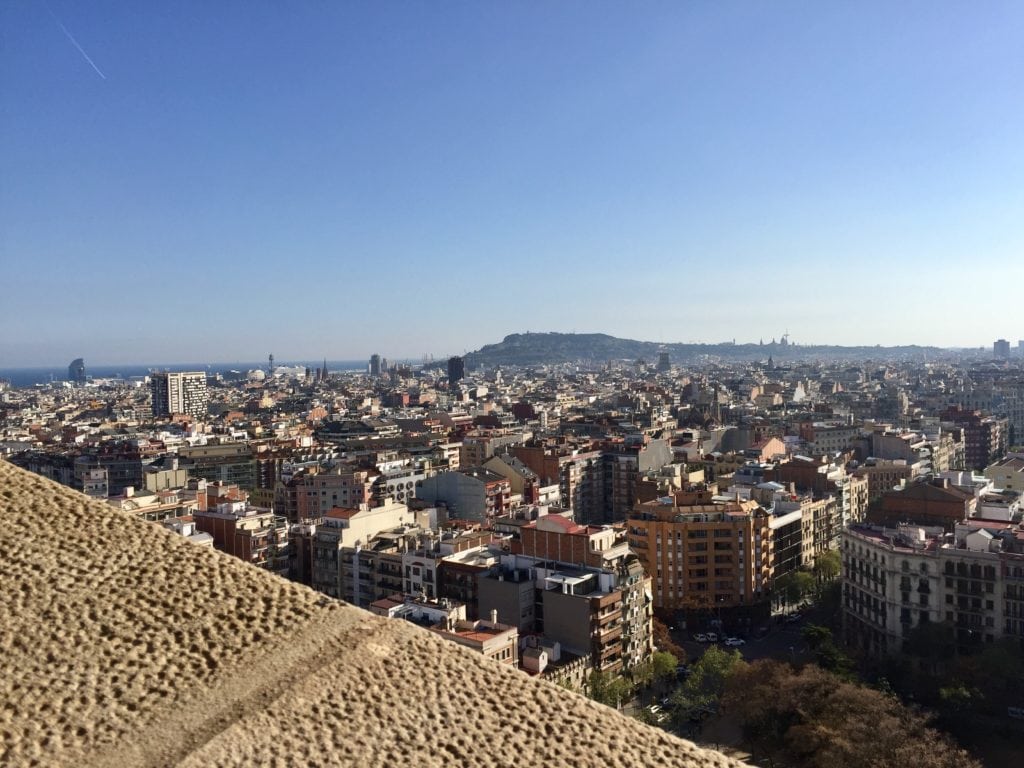 The view from the Passion towers of La Sagrada Familia (partially obstructed!).

When we booked our tickets, we had to also decide what time we wanted to go up and which side (Passion or Nativity) we would choose.  Plus, we needed to decide when we wanted to enter the basilica.  We weren’t sure how long we would want to spend inside La Sagrada Familia and I wasn’t sure if we would be able to go back and see the rest of the cathedral after we went up the tower.  We booked going up the Passion tower about 45 minutes after our entrance time.  You can re-enter the basilica after you go up the tower so the timing doesn’t matter so much.

When I was booking I also wasn’t able to find much information about which facade would be the best one to go up, so we just went with the Passion because to me it sounded more interesting.  To be honest, I was a little disappointed.  I didn’t think the view was worth the extra money.  In some spots, the view was blocked by the towers and scaffolding.  Plus climbing down the stairs did get a little claustrophobic especially as the line backed up when people stopped to take pictures.  Luckily we were able to take an elevator up. 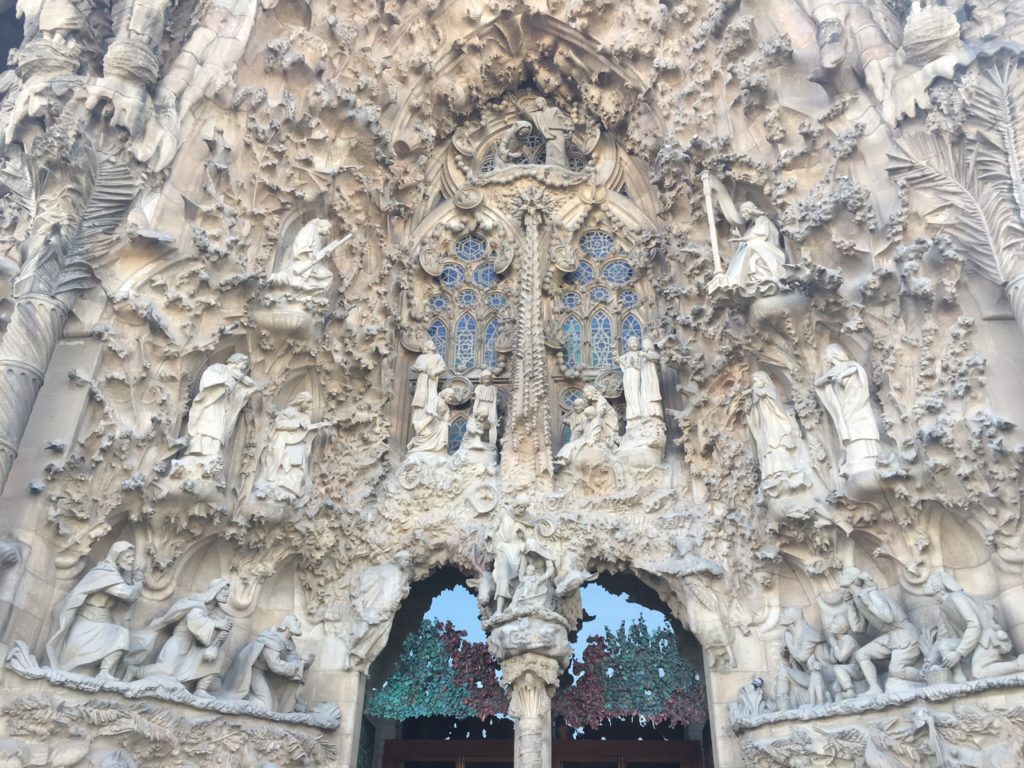 Here is a glimpse of some of the impressive detail work on the Nativity facade.

La Sagrada Familia looks impressive from the outside even though it is still not finished.  You have to get close to see the two amazing pieces of artwork make up the front and back facades.  One side tells the story of Christ’s birth (Nativity) and the other tells the story of his death (Passion).

Both are totally different styles of art to help emphasize the differences in the two stories.  The details in both pieces were very impressive, so and in a way, the artwork reminded me of Auguste Rodin’s Gates of Hell.  There will be a third facade called Spirit when La Sagrada Familia is completed.

While the outside is impressive, I think the inside is even more spectacular.  The stained glass is absolutely amazing.  I have never seen stained glass light up a place like it does inside La Sagrada Familia.  Pictures do not it justice.  Plus you don’t get a sense of the sheer size of the basilica. 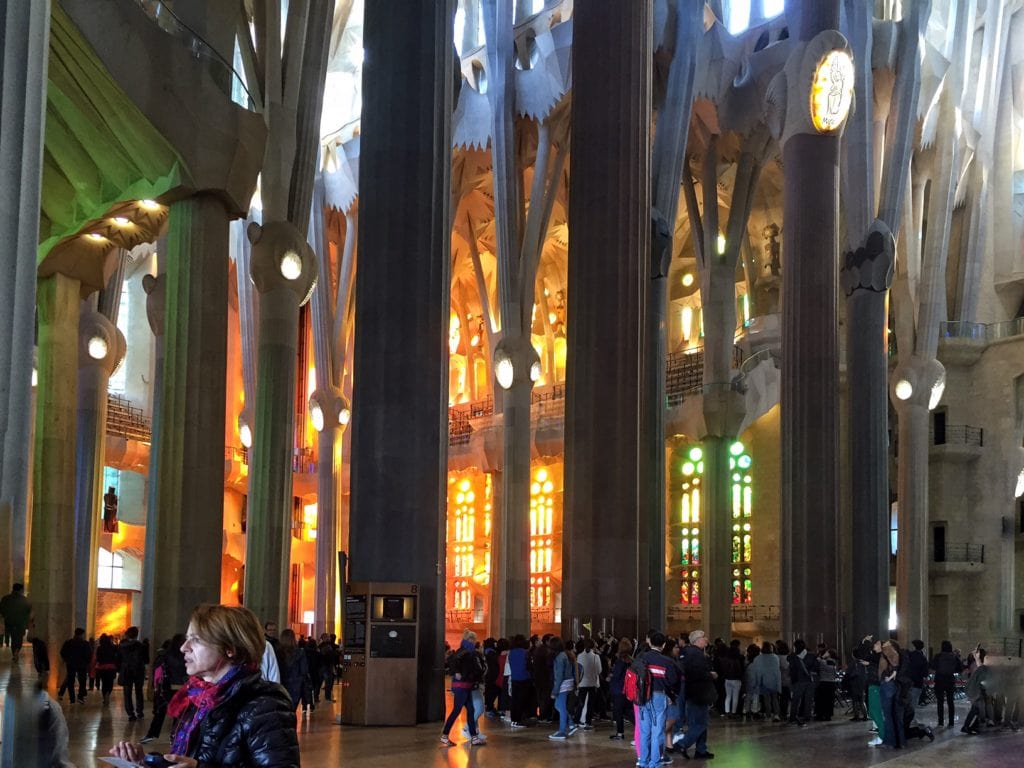 You can see the amazing light from the stained glass window.

Overall, I do think La Sagrada Familia is a must-see in Barcelona.  (It’s one reason why I think it’s better to visit Barcelona than Madrid.) You don’t get an accurate sense of it from pictures.  I enjoyed my visit and the audio tour, just would not get the ticket to go up the tower next time.  I can’t wait to see what La Sagrada Familia looks like once it is finally complete.

After La Sagrada Familia the next most famous Gaudi site is Park Guell, a public park with both gardens and architectural elements.  You can visit Park Guell for free, but to enter the monumental zone, you will need a ticket.   Entry to the monumental zone for an adult costs 7€ and a guided tour costs 14€.

We again splurged and bought tickets for the guided tour.  It is a bit of a hike from the subway so be sure you leave enough time.  We ended up basically running across the park to make sure we didn’t miss our tour.  Even if you just purchase access to the monumental zone, it will be a timed entry. 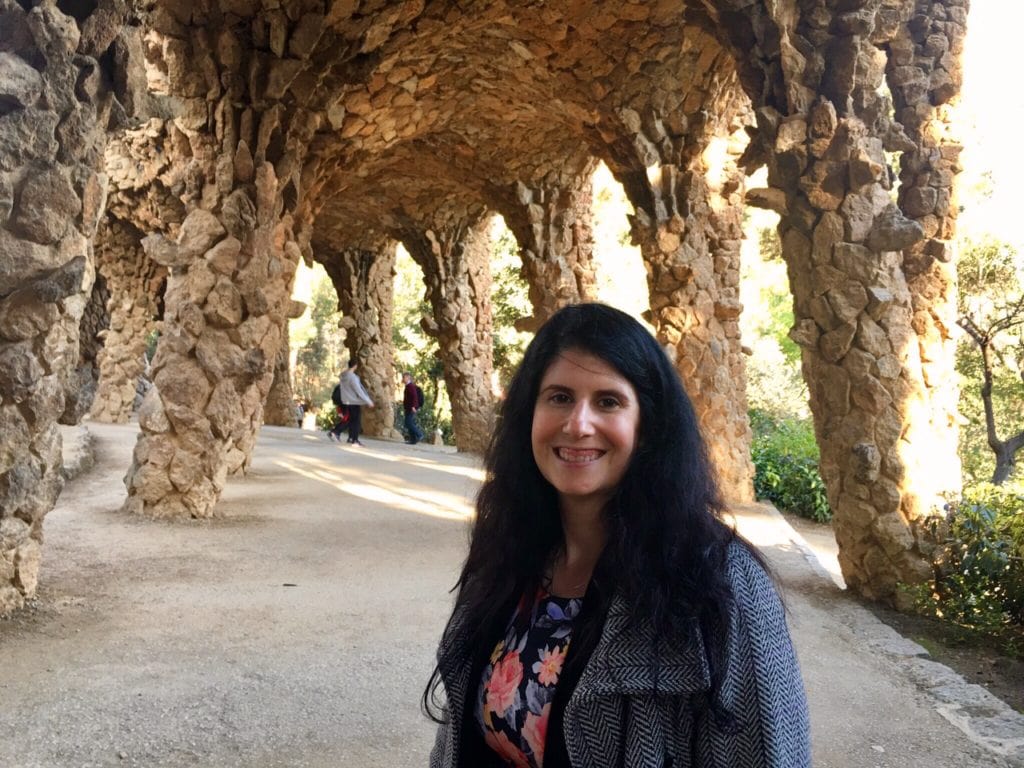 The tickets you buy online for the Gaudi House are timed entry.  Unfortunately, when we visited, we didn’t realize that we needed to buy the tickets for the Gaudi House Museum in addition to the guided tour.  The line was just too long, so we didn’t have enough time.  I was disappointed because I would have liked to learn more about Gaudi. 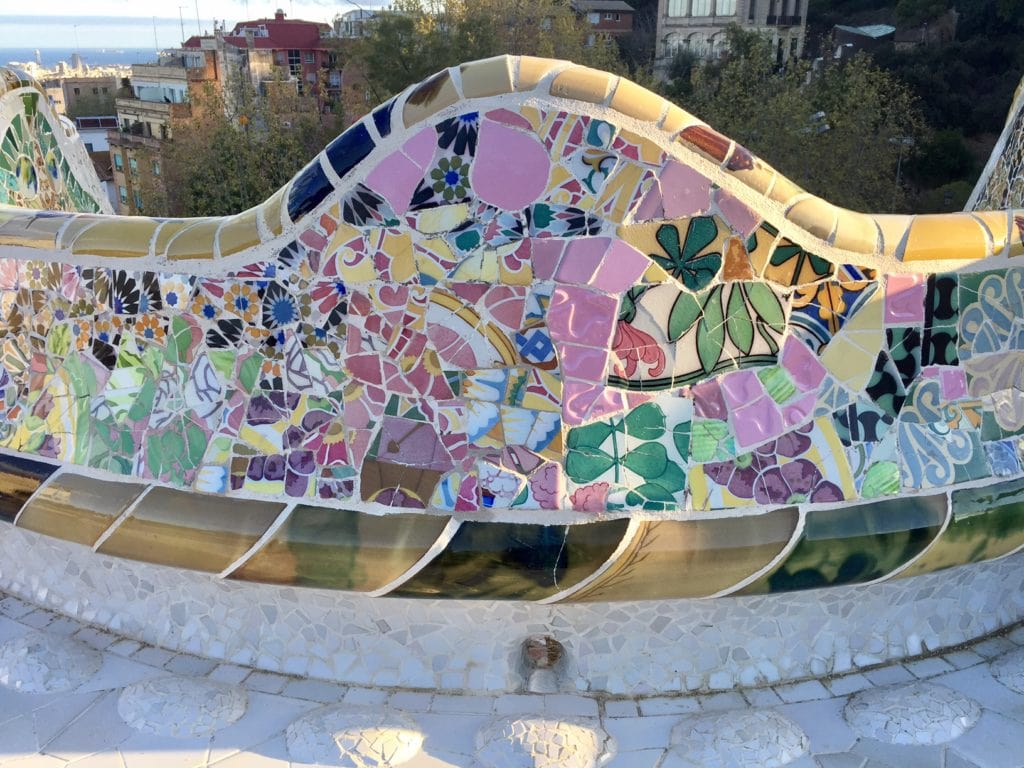 I was impressed by the colorful mosaics in Park Guell.

Walking through Park Guell, I felt like I was in a fairy tale.  To me, the buildings reminded me of gingerbread houses like the ones in Hansel and Gretel.  I also loved all the colors.  I felt like it was a place that you just couldn’t help but be happy.  In addition to the impressive artwork, Park Guell has pretty impressive views of Barcelona. 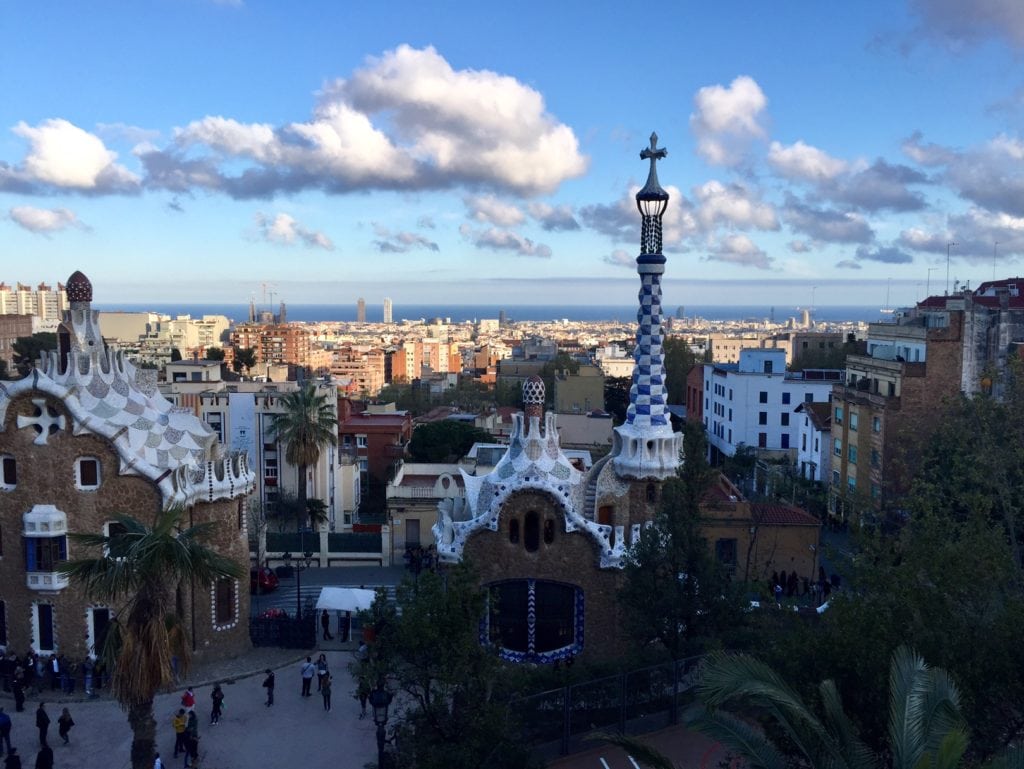 Park Guell has impressive views since it is located on a hill.

I enjoyed our tour too.  We learned a lot about Gaudi and the history of Park Guell.  I think the most fascinating tidbit I learned was that Park Guell was considered a failure at the time it was opened because it was supposed to be a neighborhood and not many people were interested in buying the houses.

Since we were not in Barcelona very long, we did not get to visit all the Gaudi buildings.  I was surprised to learn there were quite a few:

If I would have had three days in Barcelona, I would have loved to see more of Gaudi’s work. It’s definitely one of the things that makes Barcelona worth visiting.

Sadly Gaudi’s life came to a tragic end.  At age 74, he was hit by a tram.  Unfortunately, no one recognized him and did not receive immediate aid.  He was only recognized two days later and then died the following day.

I plan on trying to see more of Gaudi’s work on my next visit.  Have you seen any of Gaudi’s buildings in Barcelona? I would love to hear what you thought about it. 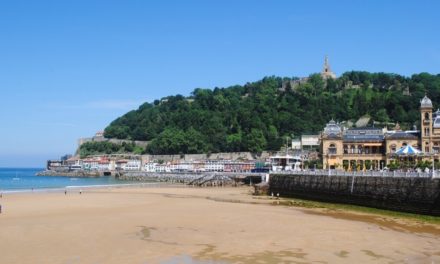 San Sebastian’s Monte Urgull is Worth the Hike! 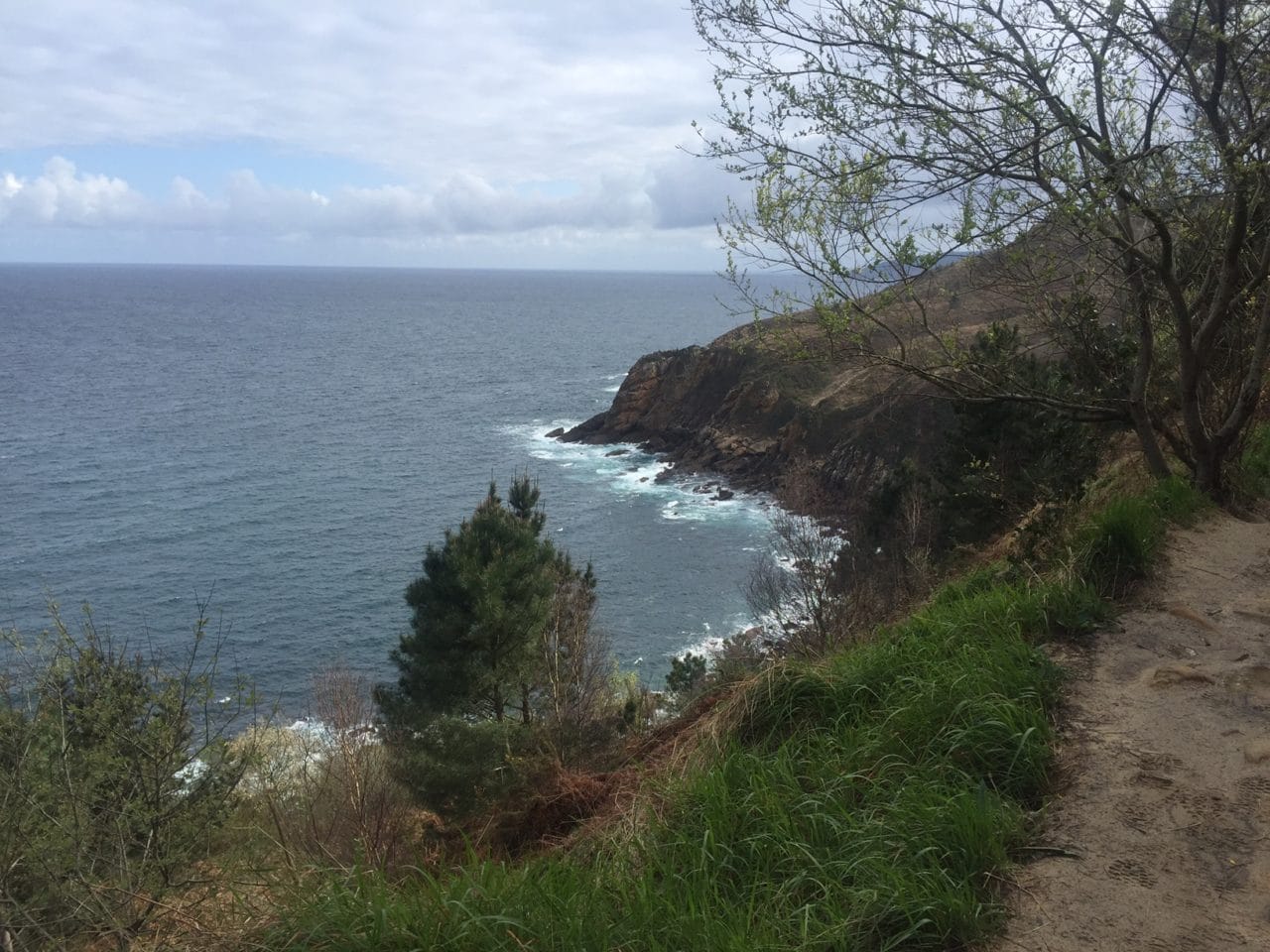 A Glimpse of Camino De Santiago 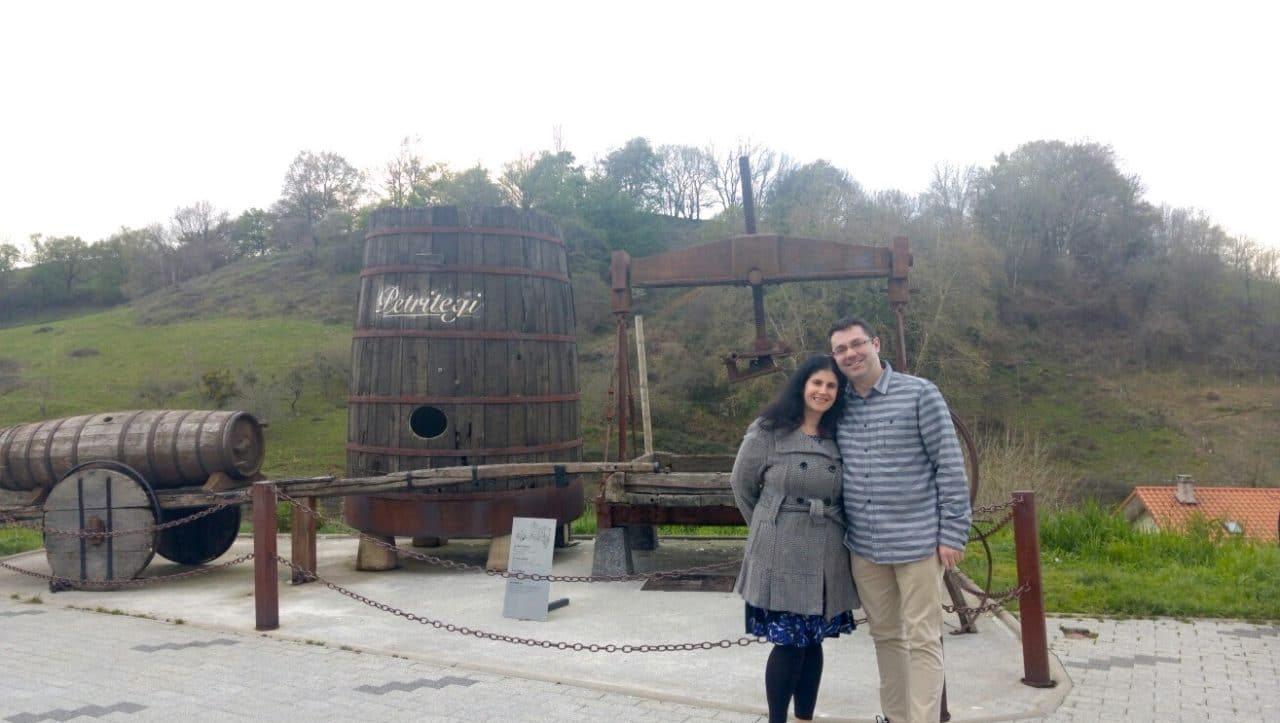 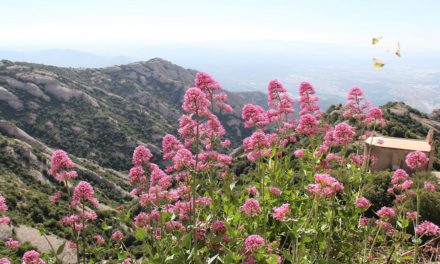