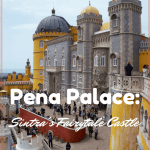 The iconic pictures of Pena National Palace made me want to visit Sintra, Portugal.  The architecture is a unique combination of Neo-Gothic, Neo-Moorish, and Neo-Renaissance styles and it is truly a masterpiece.  The bright colors of the castle up on the hilltop make Sintra one of the fairytale towns in Europe.

As one of Sintra’s most popular attractions, the National Palace of Pena does get crowded.  You may be wondering whether to visit Pena Palace on your own, take a guided tour, or skip it?

Let me tell you more about the history and what to expect to see at Pena Palace, so you can make that decision. 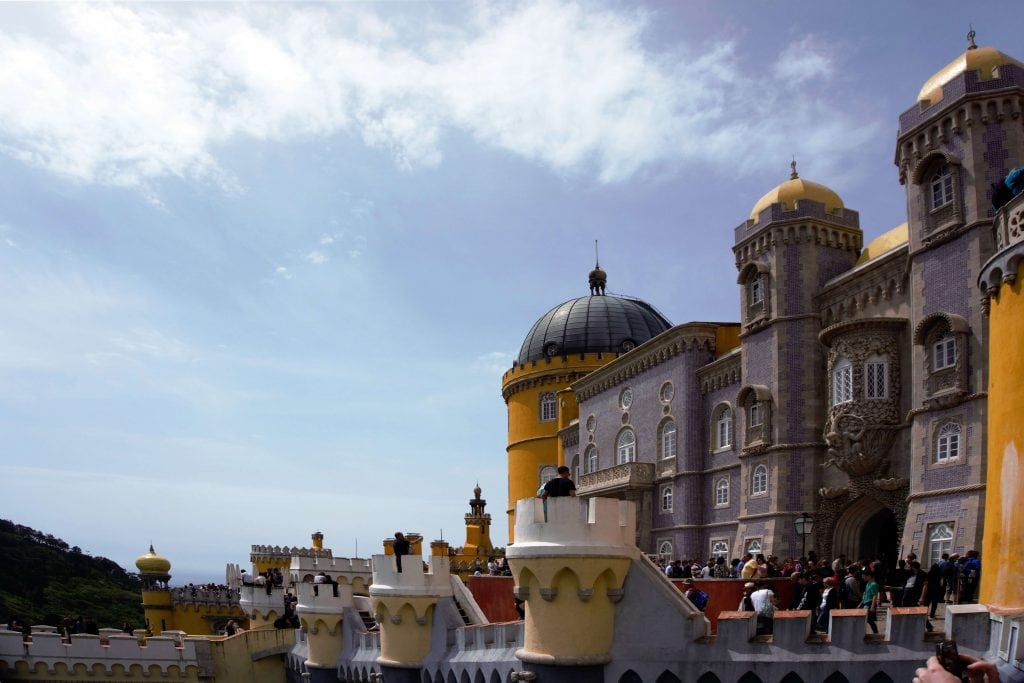 Plenty to explore on your visit to Pena Palace.

It all started back in the middle ages when a chapel dedicated to Our Lady of Pena was built on the top of the hill after an apparition of the Virgin Mary.  In the late 15th century, King Manuel I, a very religious man, ordered a small monastery to be built on the site. (He also sponsored the construction of Jeronimos Monastery in Lisbon). 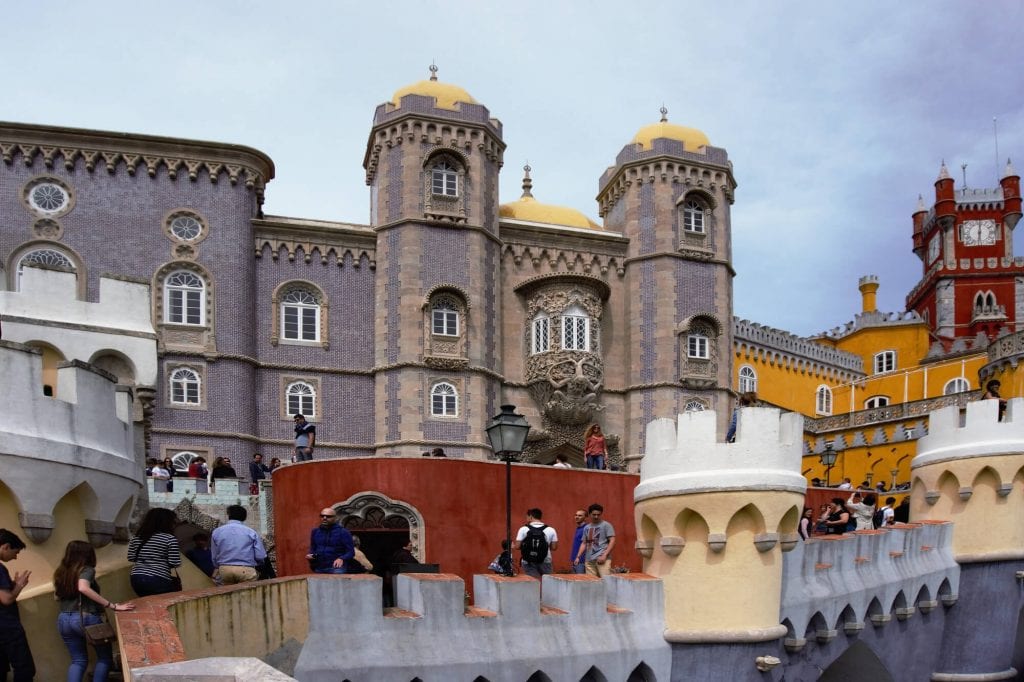 So many intricate details make the palace special.

The monastery sustained significant damage in the big earthquake of 1755 and was reduced to ruins.  Amazingly, the chapel stayed in tact.  The monastery was abandoned until King Ferdinand II acquired it in 1838 along with the Castle of the Moors and a few other estates in the area.

King Ferdinand transformed the remains of the monastery into Pena Palace in Sintra Portugal, also known as the Palacio Nacional da Pena, which would serve as a summer residence for the Portuguese royal family.  Some think it was an attempt to rival the Neuschwanstein Castle in Bavaria.

He changed the areas where the monks used to live into bigger rooms.  However, he soon realized the building wasn’t big enough to be a proper royal palace, so he decided to create a new wing.  The part of the building painted in red is the old monastery and the new areas are painted yellow. 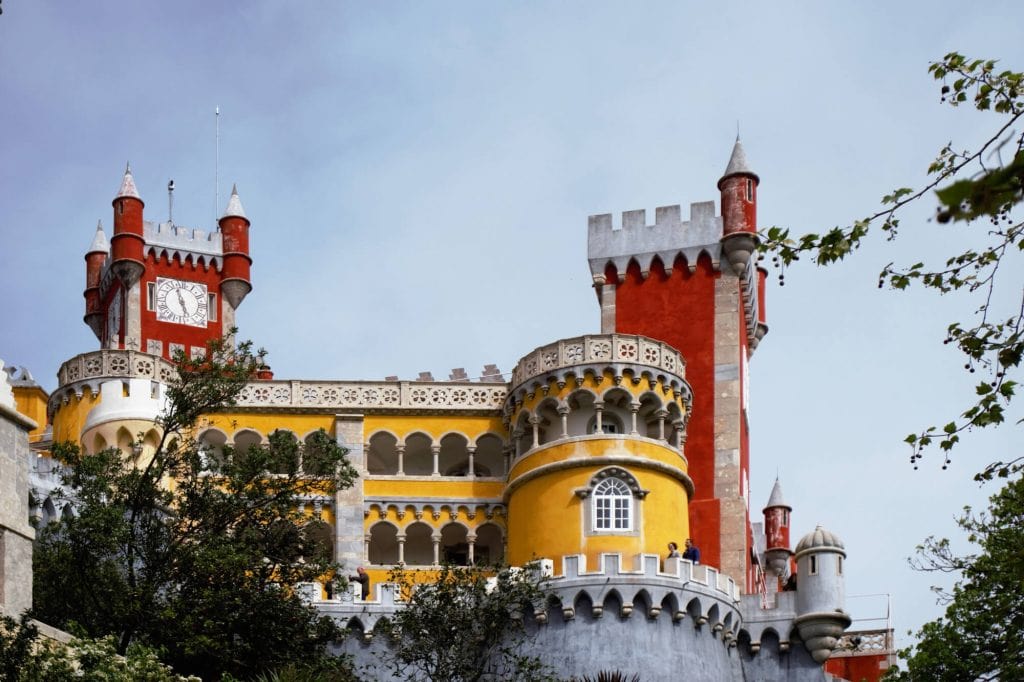 I just love the colors of Pena Palace.

After Ferdinand died, the National Palace of Pena went to his second wife Elisa Hensler, Countess of Edla. Then in 1889, the palace became the property of the Portuguese government. The last queen of Portugal, Queen Amélia, spent her final night at the palace before leaving the country in exile during the Republican Revolution of 1910.

The palace quickly became one of Portugal’s most visited monuments. Over time, the colors faded and the palace was entirely gray.  By the end of the 20th century, the palace was repainted to its original hues.  In 1995, the palace and the rest of the Cultural Landscape of Sintra were classified as a World Heritage Site by UNESCO. 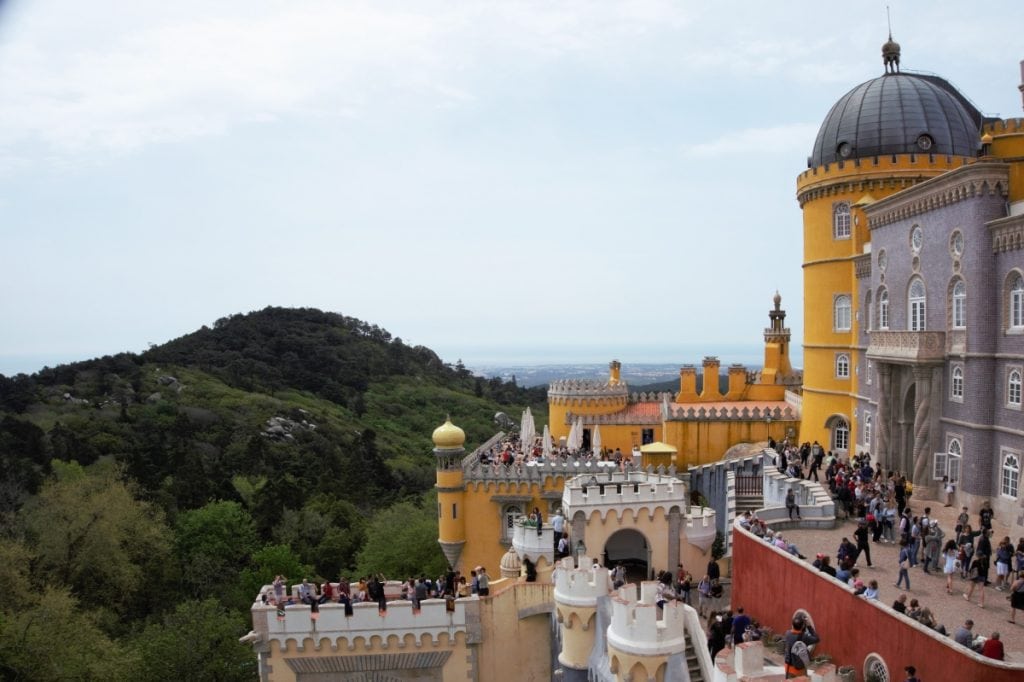 You can see how popular Pena Palace is!

In spite of the crowds, Pena Palace is worth a visit – at least half a day if possible.  Go early to try and beat the crowds. There are a few different areas that are must-sees when visiting Pena Palace – Inside the Palace, the Palace Walls, the Chapel, and the Gardens.  Here’s a a little more about what you can expect at each stop. 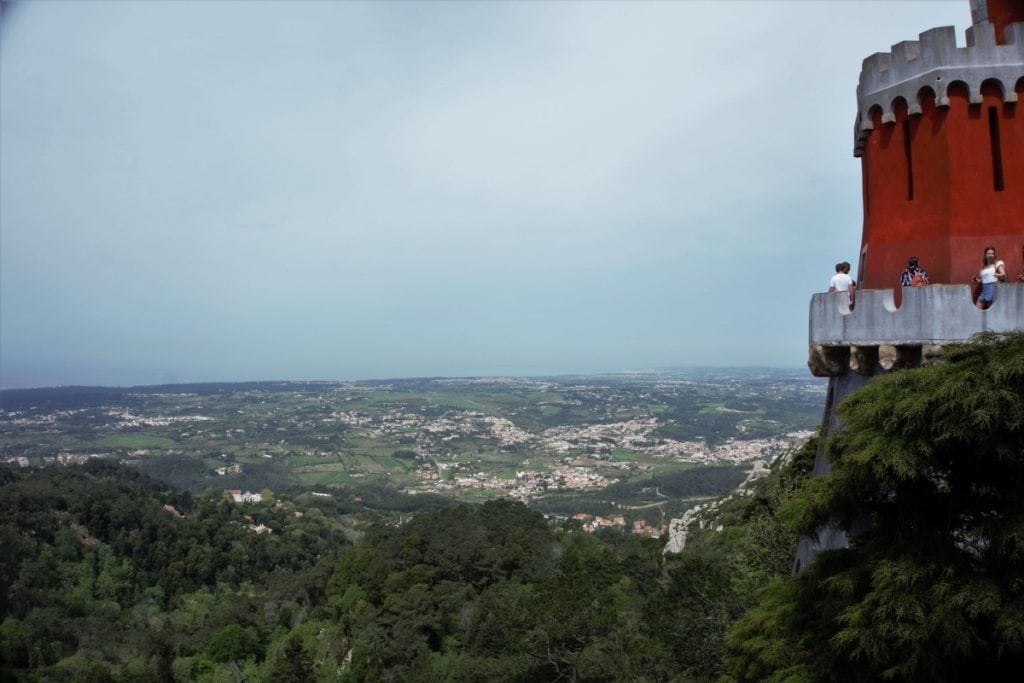 From Pena Palace, you have a great view of the Sintra Hills. 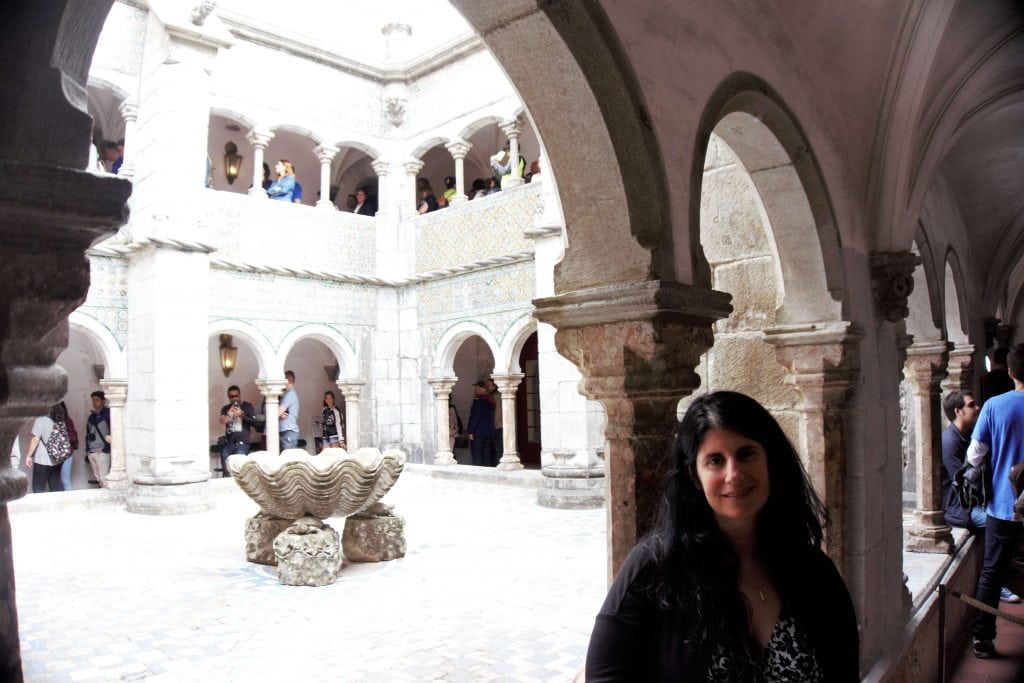 Anisa inside the courtyard of Pena Palace.

Of course, you must go inside the Palace! I saw the line to go inside Pena Palace as soon as I reached the main level.  I was a little intimidated at first, but the line to see the Pena Palace inside moved quickly.  The queue ran the length of the courtyard area but we only waited about 20 minutes.

While we were waiting, we admired the newt that watches over the entrance to the inner yard.  He is half a man, half a fish, his hair gradually turns into branches and symbolizes the four elements: fire, water, air, and earth. 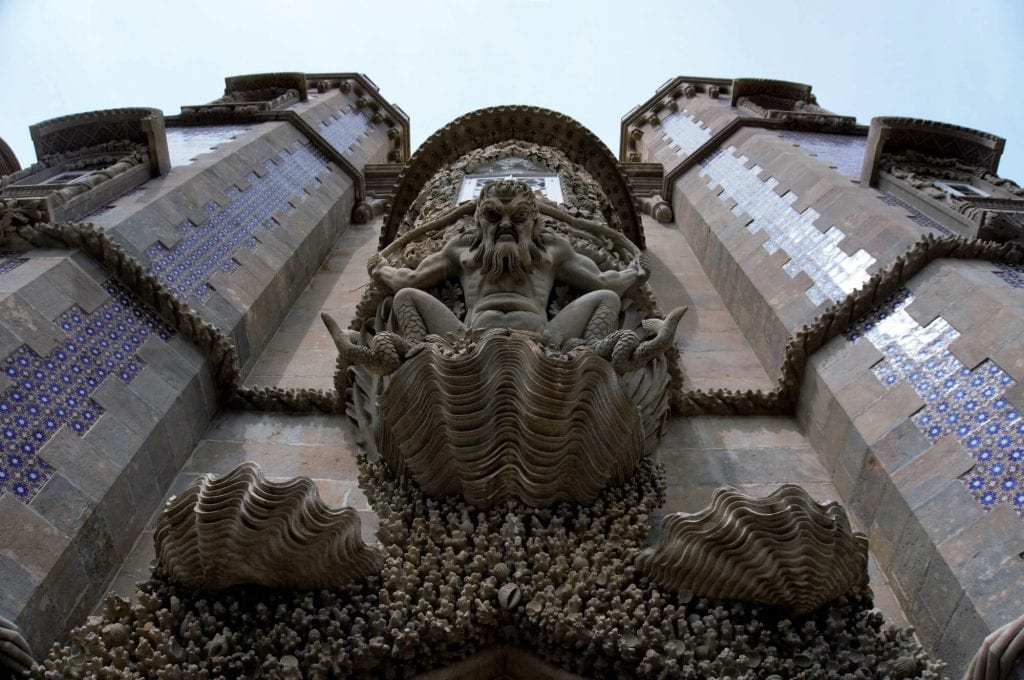 The Newt is a captivating piece of art!

Once we got inside Pena Palace, it was still crowded and we moved through the rooms at a slow pace. The rooms are decorated as they would have been when royalty used the palace as a summer home.  I was impressed with the tile work, especially in the inner courtyard.  I loved all the detail and carvings on the furniture pieces. 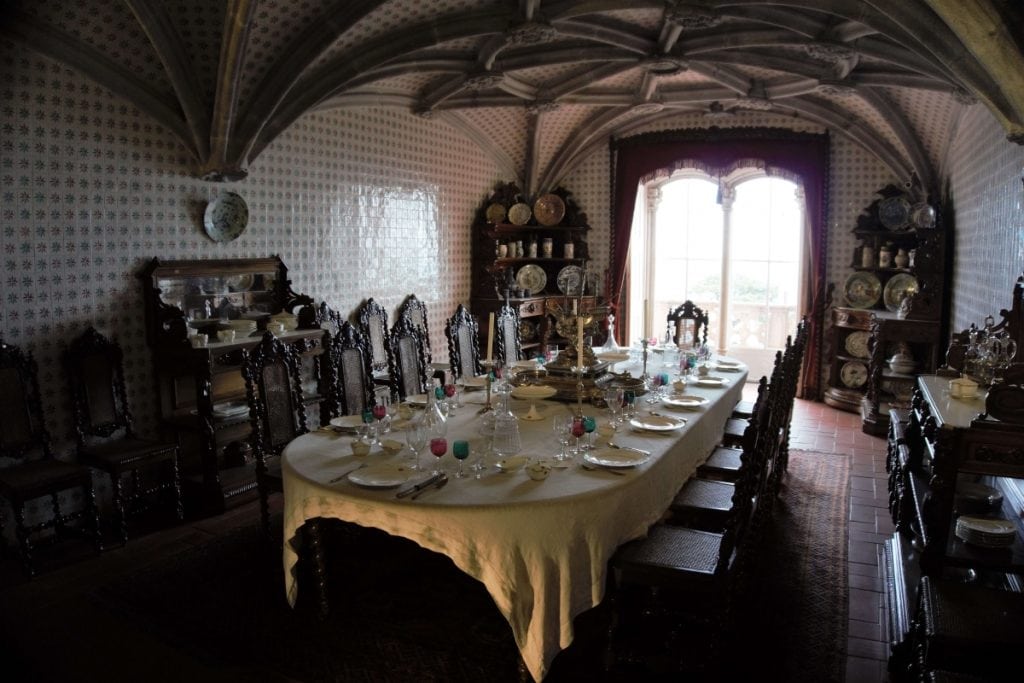 A glimpse inside one of the rooms of the Pena Palace.

Note: Some of the rooms were under renovation while we were there.  Photography is allowed inside Pena Palace, but selfie sticks are not! 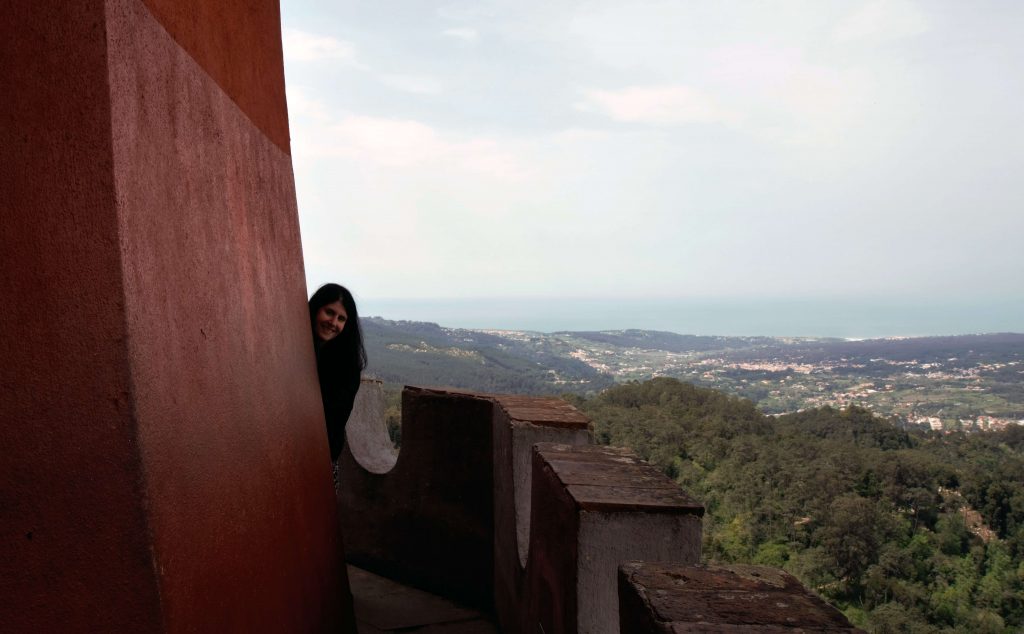 Just like at the Moorish Castle, you have the opportunity to do a castle wall walk at Pena Palace.  The start of the walk is not too far from the entrance to the inside of the castle.  You will definitely want to bring a camera for this because the views are spectacular.  The walk is not long but I would recommend allowing 20-30 minutes if you are the type that likes to take pictures. 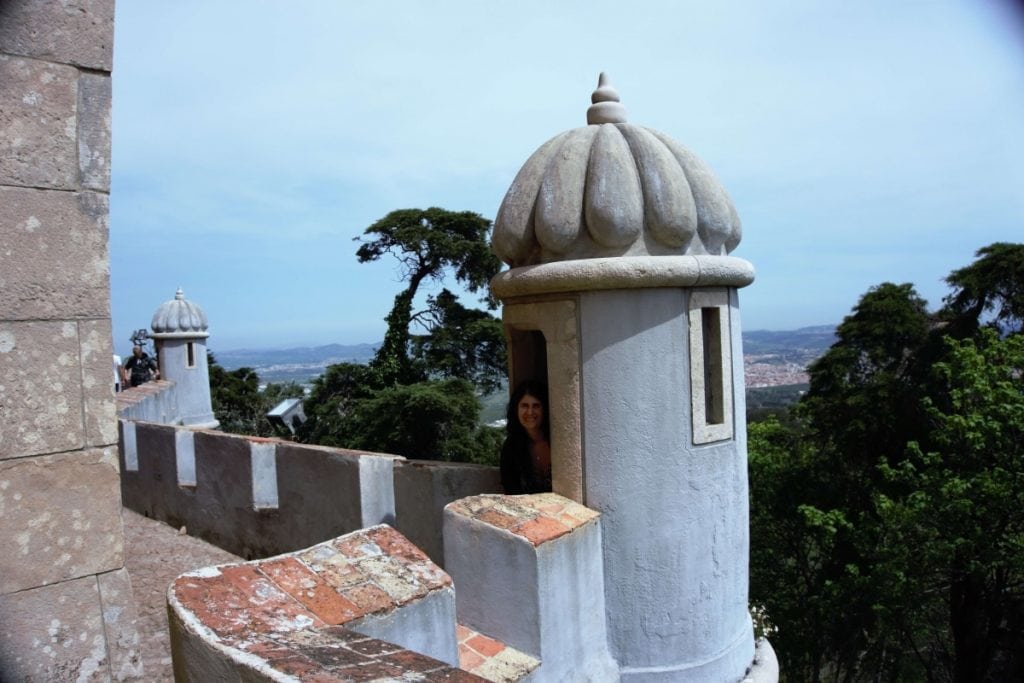 It would be a great place to play hide and go seek!

There is a small chapel inside Pena Palace which was built in the 16th century.  Amazingly, it was not damaged during the earthquake.  Again, the tile work inside is impressive and I loved the sculptures by the altar.  There is also a nice stained glass window.  You can enter the chapel from one of the courtyards.

King Ferdinand also played a big role in designing Pena Park.  He wanted the Pena Palace gardens to be a maze of romantic paths to impress his guests. The park has plants from all over the world: North American Magnolia, Japanese Camellia, Australian Fern, different cypresses, and cedars. The highlights of the gardens include the statue of King Fernando II, the lush fern gardens, and the southern viewpoint that has amazing views over the colorful palace.

The park covers over 200 hectares, so you will want to allow time to explore it.  I can just imagine all the work that goes into maintaining such a large and beautiful park.  It looks so green, I know I could never get my lawn that nice, even with the best garden hose.

Unfortunately, we did not have time to see Pena park because we wanted to see as many castles as possible in the one day we had in Sintra.  I hope I make it back so I can take some time to explore the gardens.

Should You Take a Guided Tour of Pena Palace?

We chose to visit Pena Palace on our own because we wanted to be able to see it at our own pace.  I also did not want to commit to being at a certain attraction at a certain time.  While we may have missed out on learning more about the history and the details of the Palace, we enjoyed our visit.

I can see the benefits of taking a guided tour too.  Those that are interested in architecture, art, and history will learn more on a tour compared to exploring on their own.  Also, some people may not want to navigate the train from Lisbon to Sintra and there are many tour options that leave from Lisbon or even pick up at hotels in Lisbon.

Parques de Sintra, the organization that runs the attractions in Sintra, offers 90-minute guided tours of Pena Palace daily at 2:30 pm.  The tours are only €5 per person (in addition to Palace admission).  During peak periods (like Easter, July, and August), they may offer an additional tour at 10:30 am.  You don’t need to book these tours in advance.

At first, the tours sound ideal, but my concern is that crowds at Pena Palace in the afternoon might be overwhelming.  If you happen to be visiting during the times when they offer a morning tour might be better.  Additionally, the tours may be done in English, Portuguese, or Spanish.

The guided tours offered by Parques de Sintra are a great affordable option, but there are other tours that might be better suited for you especially if you don’t want to deal with traveling from Lisbon to Pena Palace.

There are two places to eat at Pena Palace.  We went to the first one we found since we were hungry! However, if we would have gone up one more flight, there is a cafe that has outdoor seating.  The food we had was surprisingly good though, especially the cod! 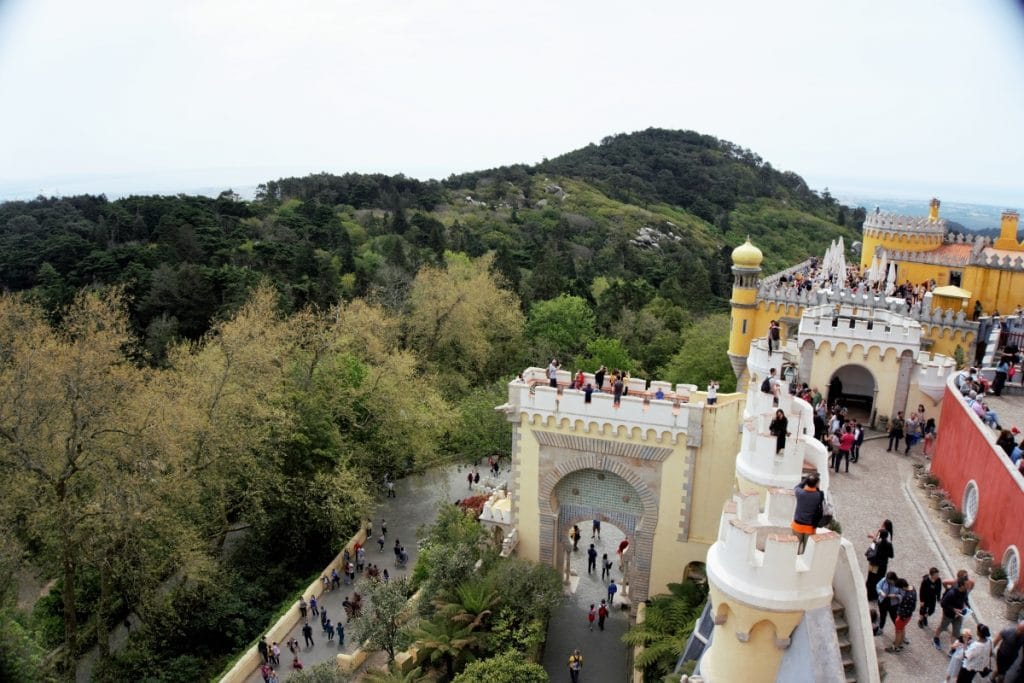 The view from atop Pena Palace.

Parques de Sintra offers tickets for the Park and the Palace or just the Park.  The tickets for both attractions are €14 for adults, €12.50 for children 6-17 years old or seniors over 65, or €49 for a family ticket which includes 2 adults and 2 children.  You can save €1 per person by going during what they call happy hour from 9:30-10:30.  You can also save time and money by purchasing your Pena Palace ticket online here along with the other attractions in Sintra that you plan on visiting.

How to Get to Pena Palace

The 434 bus (which you can pick up from the Sintra train station) does have a stop at the entrance to Pena Palace or it is a short walk from the Moorish Castle.  However, it is a steep climb up from the entrance to the actual palace.  There is a small bus that will take you there for an extra €3 per person.  You can buy the tickets at the gift shop close to the bus stop.

We walked from the Moorish Castle and then decided it was worth it to take the bus up the hill because we knew we would still be doing lots of walking the rest of the day.  It would give our feet a well-deserved break.  Luckily, it’s a quick ride to the top because it was quite bumpy!

Note: I do not recommend driving as parking at Pena Palace is very limited.  You would still need to climb the hill or take the bus up to the Palace.

Pena Palace is One of the Highlights in Sintra

You could easily spend a whole day just exploring the National Palace of Pena and Pena Park, but there are several other places you must visit in Sintra – such as the Moorish Castle, National Palace of Sintra, Quinta de Regaleira, and Monserrate Palace, just to name a few.  As mentioned in my previous post about Sintra, allocate two days in Sintra if your itinerary allows.  You can either do two day trips to Sintra, since it is only a short train ride from Lisbon, or you can spend one night at a hotel in Sintra (check availability and prices for Sintra hotels here).

I think one of the reasons, I like castles and Pena Palace so much is that they make me feel like I am in a fairytale.  It’s considered one of the most romantic castles in the world.   Pena Palace is just magical and a must visit for everyone going to Portugal.  Have you visited any fairytale castles? 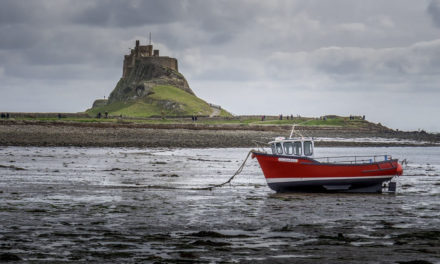 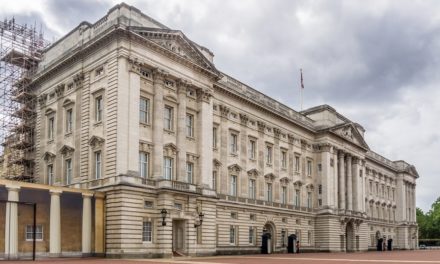 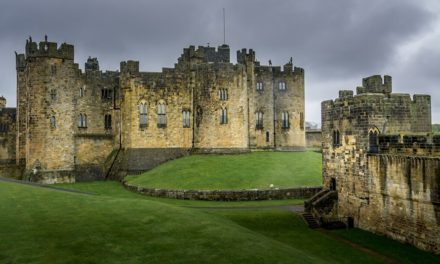 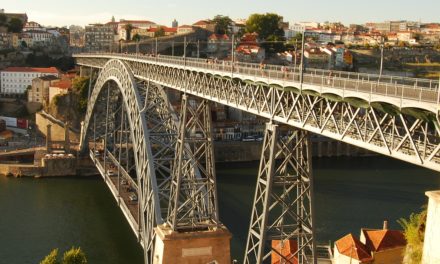