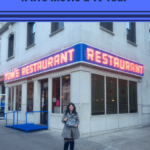 Even though I have been living in New York City for over 11 years now, I still enjoy doing some touristy things every once in a while.  So last Saturday, my friend Teju and I decided to check out On Location Tours’ When Harry Met Seinfeld Tour.  I’m not a big movie or tv person, but I did love When Harry Met Sally and Seinfeld, so I knew I would enjoy the bus tour.  Let me tell you more about our experience so you can decide if you want to do the tour yourself. 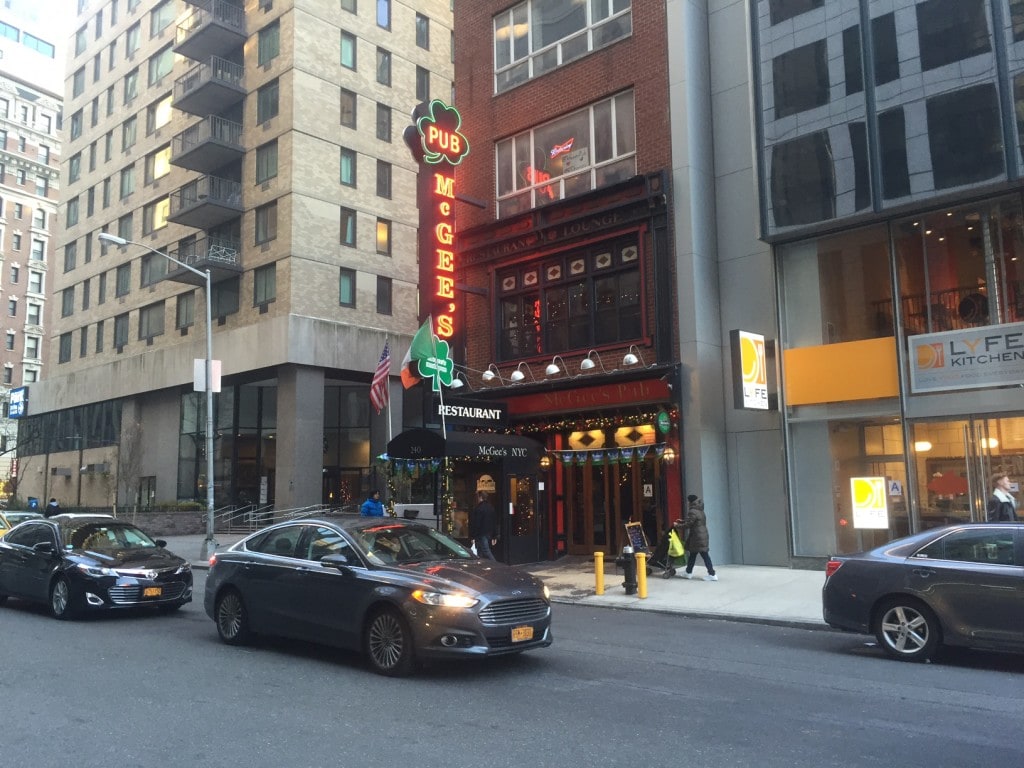 Your tour will start and end at McGee’s Pub

The tour starts right outside McGee’s Pub, which is the inspiration for the bar in the tv show How I Met Your Mother.  When we arrived, there was a bus waiting for us right across the street.  Since I was one of the first to board the bus, I decided to sit in the front row, so that I wouldn’t miss anything.  Being in the front, I didn’t have anyone tall blocking my view, but I did have to look up to see the tv clips, other than that the bus was very comfortable.  There was also a restroom on board, just in case.

Our tour guide, Max Brand, gave us an overview of the tour.  It would last about two hours (depends on traffic) and we would make three stops.   He would be showing us clips from movies and tv shows and point out the locations as we passed.  Since he was an actor, he would try to add in the inside scoop when he could.

Max has appeared in the HBO miniseries Mildred Pierce and also performs regularly at the Upright Citizens Brigade Theater.  Throughout the When Harry Met Seinfeld tour, there would be trivia questions about the different movies and shows featured.  The first person to get the question right won a tootsie pop.  The questions were not easy, but kudos to my friend, Teju, for winning one.

The When Harry Met Seinfeld bus tour started right on time.  The first site we saw was the iconic Seinfeld NY location, the Soup Nazi place, along with the corresponding clip.  I enjoyed seeing all the clips during our tour, it was like a trip down memory lane.  It was also fascinating to see how New York has changed over the years.  There were also clips from some movies I hadn’t seen like Enchanted and Little Manhattan.  I will have to add these to my list of movies to see at some point. 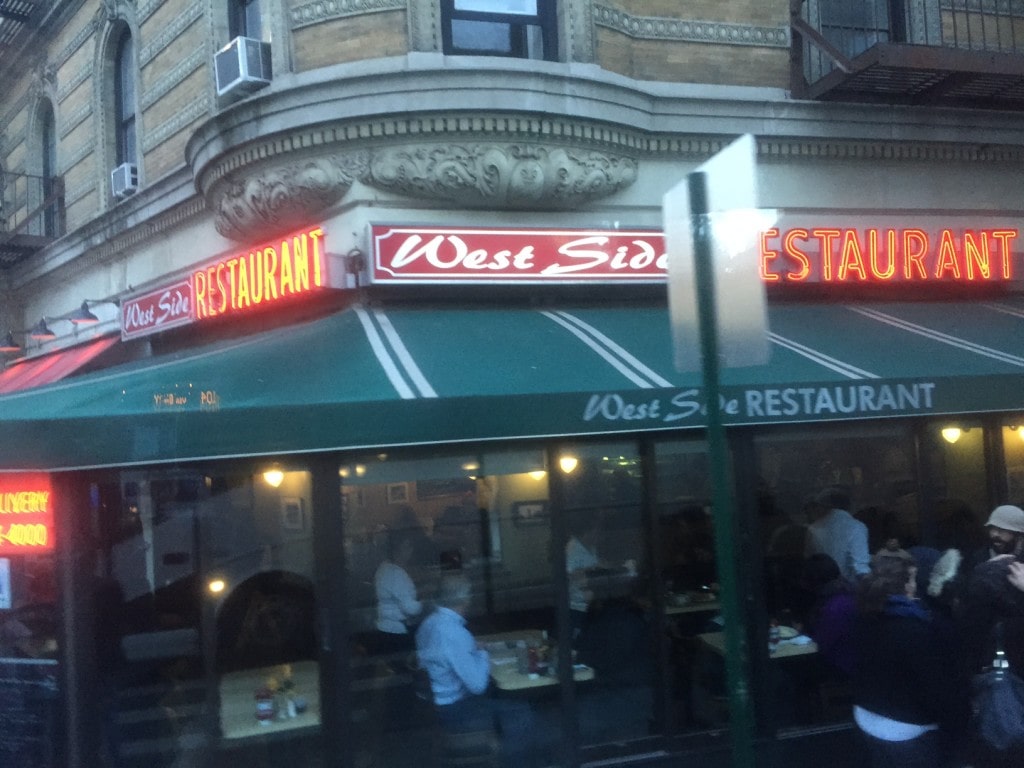 The West Side restaurant from the movie Little Manhattan

Of course, since I live in NY I knew many of the locations from the clips, but I didn’t realize they were in movies or tv shows.  For example, the Hearst Magazine building was the Oscorp Headquarters from Spiderman.  Also, I had attended an event at the Pierre Hotel, but I had no idea that was where Monica and Chandler had their wedding on the TV show Friends.  The famous scene from Scent of a Woman also took place there.  There were also several places where the business had changed since the movie, most notably the Shop Around the Corner Bookstore from You’ve Got Mail, where Meg Ryan’s character worked, is now a dry cleaner. 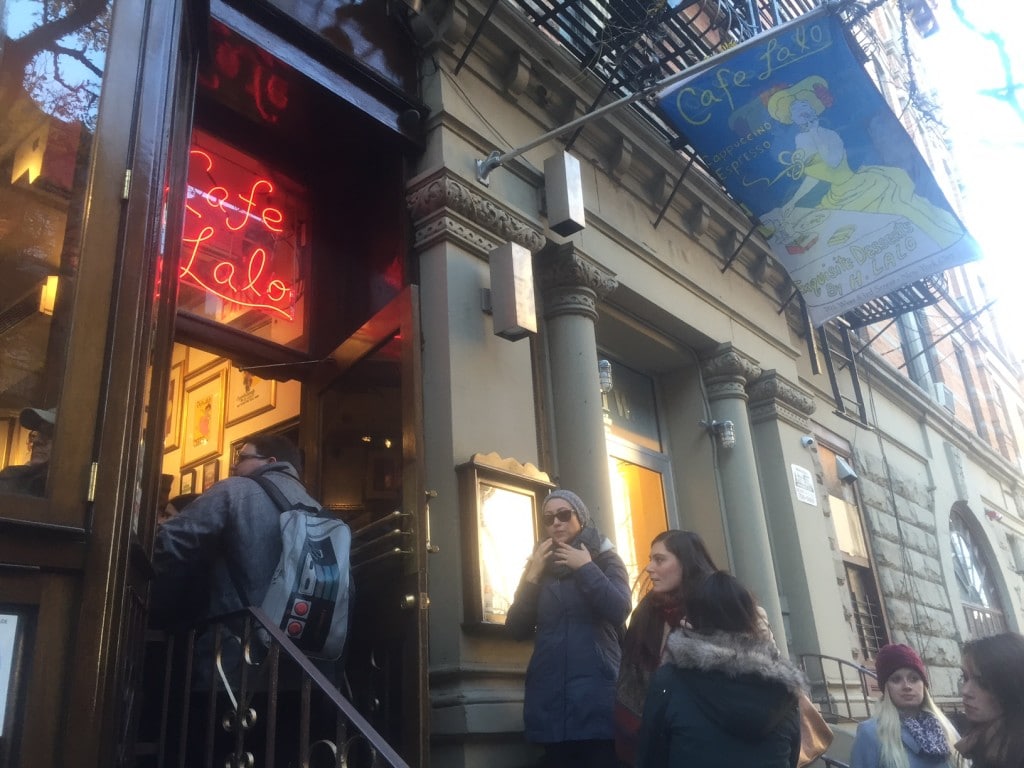 There was a line at Cafe Lalo.

Our first stop was Cafe Lalo, which was featured in the movie You’ve Got Mail.  It was a little crowded when we got there.  The place looked cute and is right around the corner from my favorite movie theatre, so I made a mental note to add it to my brunch to-do list.  The cafe is also known for its desserts and coffee.  Movie lovers should also check out this list of 100 must-see filming locations across the US.

We also stopped at Tom’s Restaurant, which is the diner you see on Seinfeld.  Then, we also passed the Metropolitan Museum of Art which is featured in many movies.  They showed us a clip from When Harry Met Sally when they were inside the museum.  The most filmed location in the world is actually Central Park and the most filmed building in the world is the Plaza Hotel. 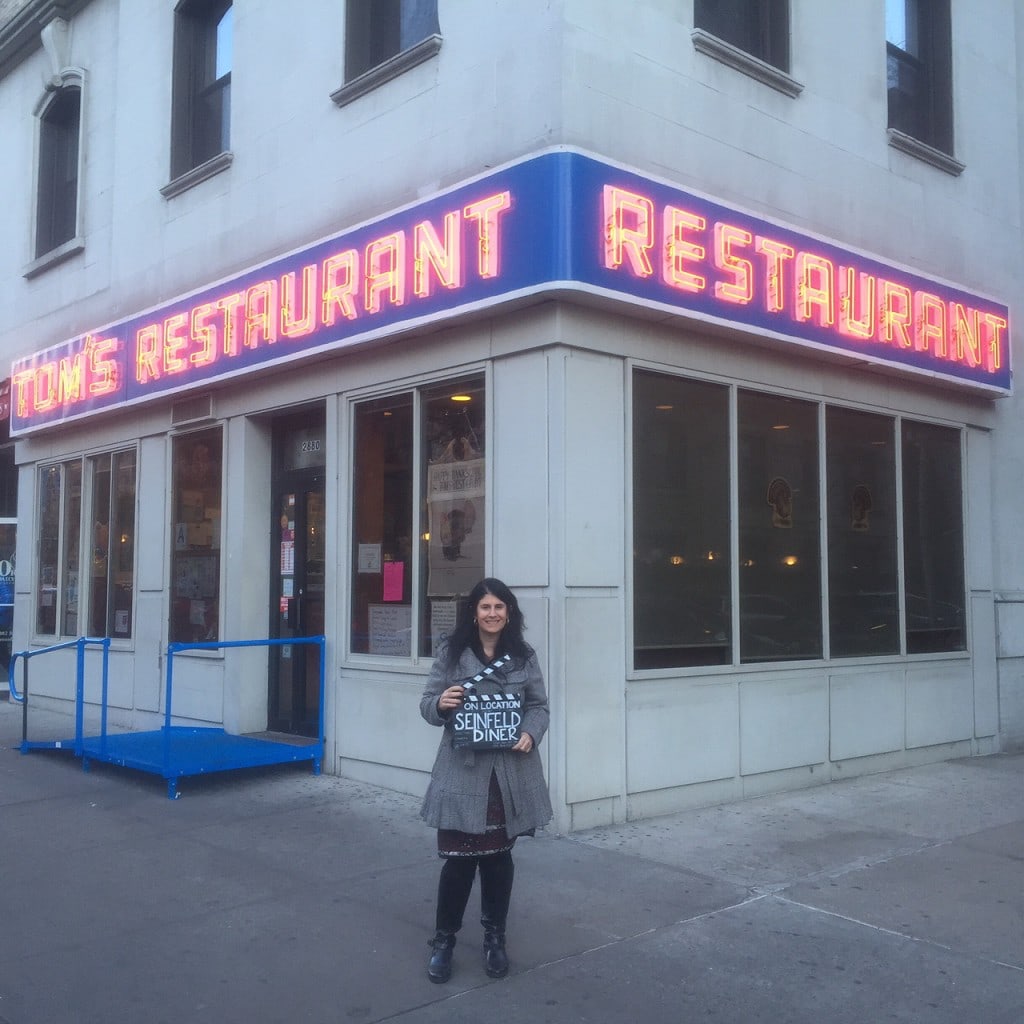 Anisa in front of the restaurant from Seinfeld

I also learned some interesting non-movie/tv related facts about New York.  I did not realize that the Time Warner Center was the first building built in NYC after September 11th.  It is interesting considering there are also two twin towers there.  Also, I was surprised to learn that St. John the Divine Church is the largest church in NYC (I thought St. Patrick’s was the largest).  We learned that this was where the funeral service for James Gandolfini was held.  The church is beautiful and I will have to return so I can see the inside.

Overall, I enjoyed the NY TV and movie sites bus tour and learned more than I had expected.  In addition, to the Seinfeld filming locations and the planned tour highlights, you never know what else you might come across on the tour.  We drove by the French consulate and saw the growing memorial of flowers for the recent terrorist attacks.  Then when we passed the consulate of the Republic of Congo, there was a small but loud protest outside.

However, it was difficult to capture good pictures.  While we did stop at three NY TV and movie sites, we drove by so many more.  In many cases, the bus was moving, but even when it wasn’t there seemed to be reflections through the glass (see picture above of West Side restaurant).

Our tour guide Max, ended our When Harry Met Seinfeld tour with a great impression of Jim Carey from the Mask.  He also told us about the other On Location Tours, like the Gossip Girl tour, that focus on specific interests.  I might have to try the Central Park TV and Movie Walking tour since I am such a big fan of Central Park.  Then, we got off the bus where we started, in front of McGee’s.

What’s your favorite movie or tv scene filmed in New York? Have you visited any Seinfeld locations?  Tell us about it in the comments below.

Disclosure: No financial compensation was received, but On Location Tours did provide tickets for the When Harry Met Seinfeld tour.  As always, opinions expressed here are my own. 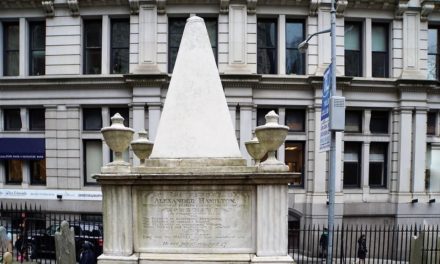 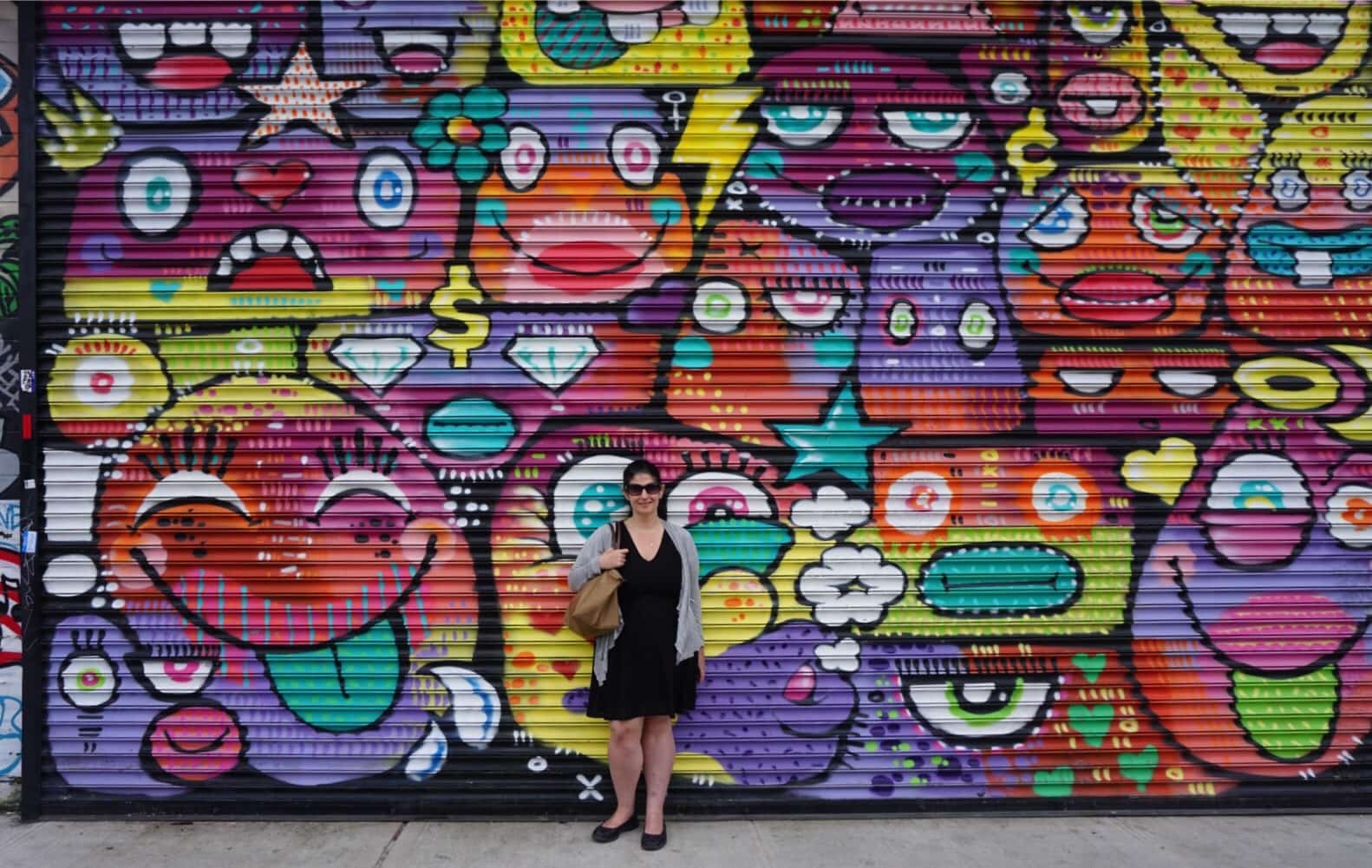 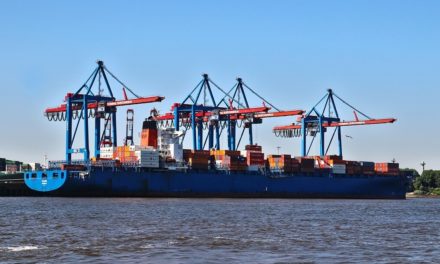 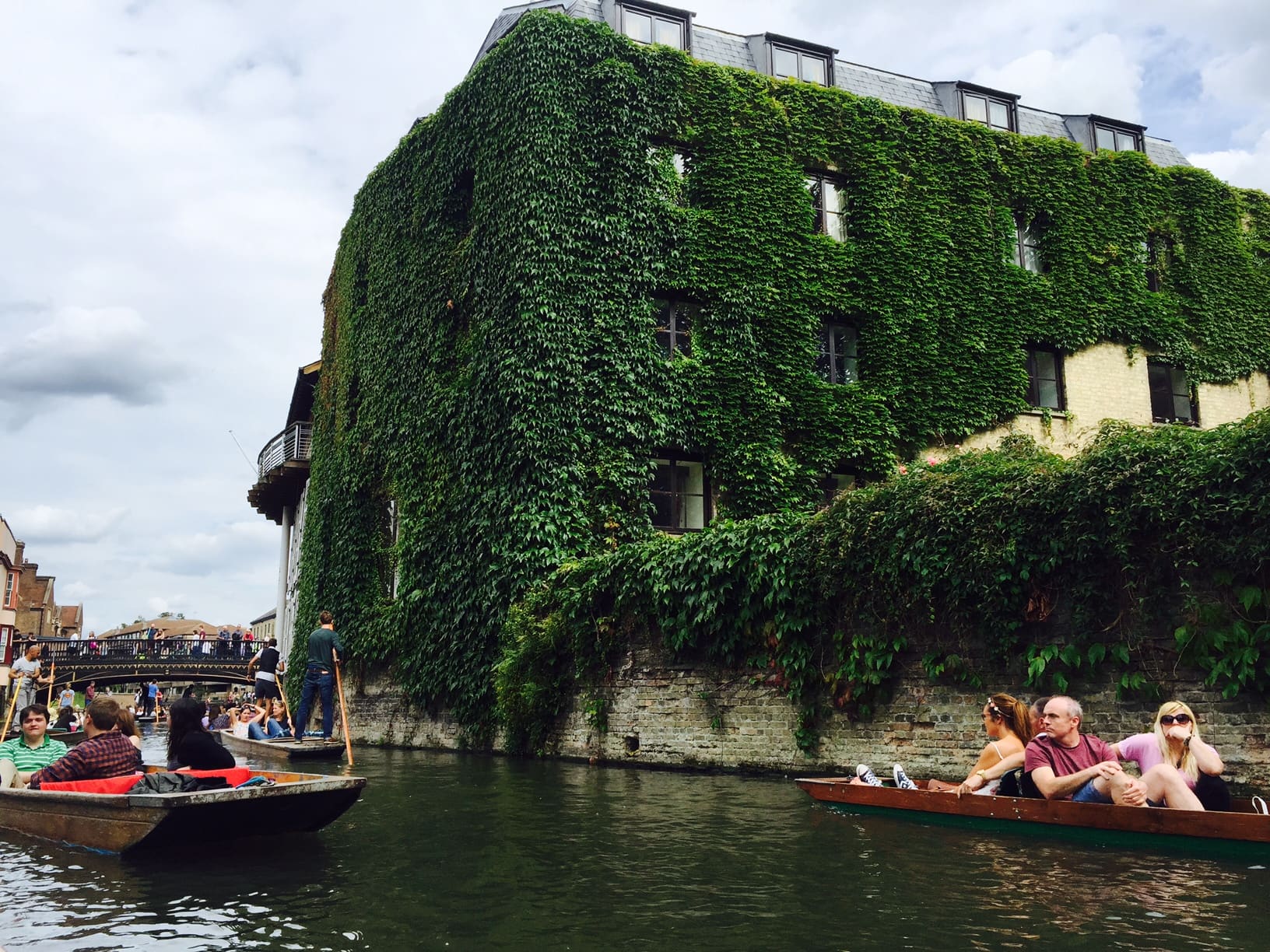